Australian songsmith Noah Earp has announced his new single The Raw and the Cooked, a broad, sweeping stroke of alternative folk-rock. To accompany the single, Earp has released a self-made film clip that endears the viewer with its undeniable quirk. The Raw and the Cooked is the first taste of Earp’s debut album Disinheritor, an enlightening collection of songs that demonstrates a rare ear for unexpected harmony. Disinheritor is out October 28.

The Raw and the Cooked rambles comfortably across its three and a half minutes, generating a sprawling acoustic soundscape that lifts and inspires the listener. Evoking thoughts of Father John Misty and Radiohead, the track nestles sweetly underneath Earp’s inimitable vocal, then climaxes in perfect chaos. Of the track, Earp says, “The Raw and the Cooked is about a person who is trapped in a bad scene. At first she seems really cynical, but actually the cynicism masks a certain naivete. We all have this to some extent – nothing is too neat and nobody’s perfect. I liked the idea of a love song that wasn’t…in the end this pretty love song fragments into a million pieces, because life is scary and chaotic.”

The clip for The Raw and the Cooked is lovingly homemade by Earp himself, and features charming characters, including Brisbane musician Laneous and band member Danny Cox, in iconic Melbourne scenes. Affectionately tongue-in-cheek, the clip was inspired by several wasted hours spent watching extreme sports and skateboard tricks on YouTube. Earp laughs, “I thought it’d be cool to grab some GoPros and film an extremely untalented person making an absolute mockery of themselves and the sport. I thought the album was serious enough…I have a habit of doing music videos myself. It’s not generally advised, but I like learning about filmmaking, and I’d rather learn about it by jumping in and giving it a shot.”

Earp’s debut album Disinheritor demonstrates the troubadour’s insatiable taste for poetics and symbolism, encompassed within a balanced acoustic/electronic environment. The result is tender, suffused with melancholy, marked by Earp’s delicate vocal tone and unforeseen tunings that unsettle as much as they ease. Recorded with Jonathan Dreyfus (Gretta Ray, Lester the Fierce), Jez Giddings (Kingswood, Dallas Crane) and Craig Harnath at Hothouse Studios, Disinheritor includes many pleasant surprises – even a duet with the 2016 winner of Triple J Unearthed’s Unearthed High competition, Gretta Ray. Of the record, Earp enthuses, “We’re not supposed to think about the fact that tomorrow we’re going be somebody else’s history book. So I guess all of these loose threads in the album – the love songs, the songs that play on religion, the songs that play on politics – they’re all set in the knowledge that this is just a flash in the pan. In some songs, that’s a vision of terror. In others, it’s where all the most important and beautiful things in life have their basis. It’s a debut album… but the irony is it all comes across as a swansong.”

Noah Earp, alongside a full band, will launch Disinheritor at an exclusive gig at renowned Melbourne venue The Toff in Town on October 27. Thrilled to finally put the record out into the world and to perform it live for the fans, Earp says, “I really enjoy performing these songs live, partly because I don’t do it that often, and partly because we always leave a bit of room to improvise. The band is solid and they know the songs so well, we really try and rein in on the moment using the words as the focal point. It’s a big sound – I like to think of us as oversized chamber music. Folk musicians don’t book us for gigs because we have too much stuff on stage!”

Tickets available from www.moshtix.com.au | 1300 GET TIX | All Moshtix Outlets 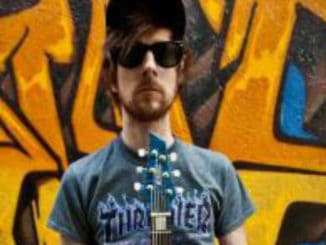