In what may be the most lethal double-header tour Australia has seen in decades, the COSMIC PSYCHOS and DUNE RATS are combining forces and heading out on tour together this June. Two rowdy bands notorious for their shitfaced shenanigans. What could go wrong?

“The Cosmic Psychos are always drunk” – Buzz from The Melvins 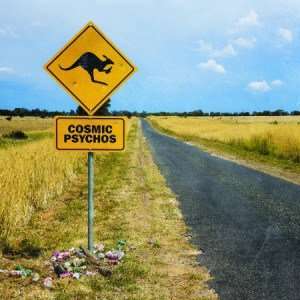 It’s been nearly two years already since the acclaimed Cosmic Psychos documentary Blokes You Can Trust was released. The film’s warm response quickly drew the band to Europe and America, reuniting them with old mates L7 in Los Angeles (their show at the Echo was the first time that three of the L7 band members had set foot in the same room since they split up). The Psychos also toured with long time friends Pearl Jam on the 2014 Big Day Out circuit. And yes, the rumours are true; Eddie Vedder brought his infamous 50 cent piece on tour with him, and put it to use on more than one occasion.

The first song lifted from the album is ‘Better, Not Bitter’. It’s classic Psychos and boasts one of the most infuriatingly catchy choruses this side of Thunderstruck. There aren’t many scenarios in which it’s appropriate to scream “IT’S FUCKIN’ BULLSHIT MAAAATE”at the top of your lungs, but if anyone’s capable of bringing out the larrakin in their listener, it’s gotta be The Psychos.

My scene is driving fast cars and shooting guns.
Ace Frehley
Aside from music and everything creative, I love open-mind people, unexpected humour, seeing the world and nature, riding my bicycle, playing billiards. I’m also a fan of coffee, whiskey and most things vintage.
Jessica Stuart Few

Flanelette pyjama pants.
Timberwolf
Right now it’s a room with no lights on. An unmade bed. A laptop with 9% battery and a mosquito that just refuses to die.
Dave Larkin, Dallas Crane
I like the beach more than anything. The beach feels like home all year round. In terms of a scene…I actually prefer to hermit most of the time.
Abbe May

I love being on a little boat near home in South West Victoria with a fishing line in the water, the Sun coming up or going down. I also love walking the streets of Melbourne or Manhattan or many of the beautiful towns and villages of Ireland or anywhere. My partner and my family are central to it all. I also love being in the midst of a great music session, anywhere, anytime, being transported into the soul of the Universe.
Shane Howard
Cool venues with good beer on tap that don’t mind us getting loud and getting room grooving so hard you feel the floor shaking.
Papa G and The Starcats

I like to think that I belong to the head-strong Independent Music Scene – where we – musos and audience and everyone in between – all make gigs/tours, recordings, releases happen for ourselves and work our arses off to keep it going for the rest of our lives – all for the love of Music!
Florelie Escano
Book clubs, philosophy and extreme black metal
Elsen Price

Act III, Scene VI of King Lear. A tense and gripping scene wherein the ageing king informs his three daughters that they have all been accepted as contestants on Family Feud.
Ben Pobjie, comedian
Hiking a 14K foot mountain in Colorado
Cole Washburn