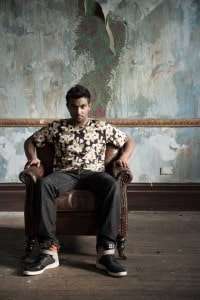 Phenomenal ticket sales for comedian Nazeem Hussain’s debut solo show at the Melbourne International Comedy Festival has seen him move to a larger venue for the final four days of the Festival.

Hussain will perform Legally Brown at Federation Square’s ACMI – BEYOND, on Thursday April 16, Friday April 17 and Sunday April 19. An extra MICF show on Saturday April 18 at 9.15pm at the Melbourne Town Hall’s Main Hall has only limited tickets left. For complete details on all shows visit: www.livenation.com.au.

Hussain was recently nominated for a 2015 Logie Award for Most Outstanding Comedy for his critically acclaimed, smash-hit SBS TV show Legally Brown. It is four years since Hussain last performed at the MICF as part of the award-winning duo, Fear of a Brown Planet, incidentally the 2008 MICF Best Newcomers. The master of exposing the inherent absurdity in prejudice and flipping stereotype on its head, Hussain’s live shows are no different – cerebral, confronting and funny.

His knack for character and deft comedic touch has seen him become a familiar voice on Triple J during 2014, as well as a regular on NOVA’s breakfast show with Meshel & Tommy. Hussain’s TV credits also include The Project (Network Ten), It’s A Date (ABC), and Balls of Steel Australia (The Comedy Channel). He was also SBS TV’s man on the ground in Rio de Janeiro during the 2014 World Cup soccer, providing nightly content to The Full Brazilian for the network.

Don’t miss your last opportunity to see the brownest household name in Australia right now, live and on the big stage, while you still can.

“Hussain’s cheerful manner belies the acuity of his observation.” – The Guardian UK

For complete tour and ticket information, visit: www.nazeemhussain.com or www.livenation.com.au

The stage is dimly lit and a little dark, much like the name of Scottish comedian, Daniel Sloss’ new comedy show. From the outset Sloss is in fine form. At 25 he is already a […]

Matthew Hardy is a career comedian. He was the first Australian comic to establish himself on the UK’s super-creative, lucrative London live comedy scene. Hardy has appeared on Spicks & Specks, Good News Week, and is […]

When I’m not working in the studio or doing shows I’m at home with my partner and our baby so I guess they are my scene.
Way of the Eagle
It’s a delirium, really, but I like to live like this.
Hugo Race

Well I’m still looking for my scene, and I think I might have found it. Between the pages of What’s My Scene Magazine.
Dave Faulkner, Hoodoo Gurus
Our gigs have an air of danger and sex. Beautiful women are free to express themselves and are as dangerous as hell. Everybody can have a good time ’cos there’s a lot of love in the room and we just can’t help but stomp out that primeval swamp boogie ooze.
Chris Russell’s Chicken Walk

Flanelette pyjama pants.
Timberwolf
My scene is driving fast cars and shooting guns.
Ace Frehley
I like to be out in the nature, to get away. Go to the woods. My dad lives in the woods. Maybe once or twice a year I don’t have phone reception there is no Wi-Fi
Fredrik Åkesson, Opeth

I like to think that I belong to the head-strong Independent Music Scene – where we – musos and audience and everyone in between – all make gigs/tours, recordings, releases happen for ourselves and work our arses off to keep it going for the rest of our lives – all for the love of Music!
Florelie Escano
Staying home out of harms way.
Peter Milley, Cairo Club Orchestra

Right now it’s a room with no lights on. An unmade bed. A laptop with 9% battery and a mosquito that just refuses to die.
Dave Larkin, Dallas Crane
All the kids who weren’t cool at school and still aren’t. Those people who didn’t manage to become awesome artists and uber hip performers. The raggy dolls who never found a way to make their raggy doll-ness work for them.
Jonathon Duffy

I’m in with the Out-Crowd
Dave Warner
Going to the river on sunny afternoons with the blow up dingys and resting your beers on lily pads.
The Frowning Clouds
Comedy, surreal show girls, burlesque and theatre
MC KREWD