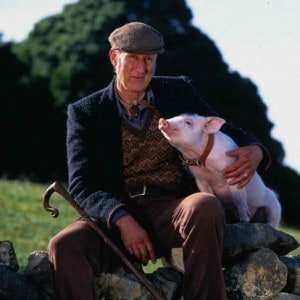 George Miller’s Babe, the 1995 family movie about a pig who wants to be a sheepdog conceived by writer/producer George Miller and director Chris Noonan, is an icon of Australian cinema. To coincide with its twentieth anniversary, the MSO and original soundtrack composer, Nigel Westlake, join forces to present the world premiere of Babe: The Twentieth Anniversary Concert, an exclusive all-ages screening with Westlake conducting the Orchestra in a performance of the film’s score adapted especially for the concert hall.

The official account for the Melbourne Symphony Orchestra. They are doing some really great shows lately and the account documents that really well. Follow for fun “behind the scenes” pics and videos. https://twitter.com/melbsymphony

Scene News: Get your thrills and chills this Halloween when MSO performs Evil Dead in Concert

This Halloween, get your fill of thrills and chills when musicians from the Melbourne Symphony Orchestra perform Evil Dead in Concert, a live-to-film event featuring a special guest appearance by original score composer Joe LoDuca. […]

Classic meets contemporary in the diverse program for the upcoming Beethoven’s Symphony No.7 concert which will feature more than just music by the well-known composer. The concert will start with the Australian premiere of a […]

I love being on a little boat near home in South West Victoria with a fishing line in the water, the Sun coming up or going down. I also love walking the streets of Melbourne or Manhattan or many of the beautiful towns and villages of Ireland or anywhere. My partner and my family are central to it all. I also love being in the midst of a great music session, anywhere, anytime, being transported into the soul of the Universe.
Shane Howard
World/folk. Acoustic and proud of it!
Ilana Cravitz, The London Klezmer Quartet

Flanelette pyjama pants.
Timberwolf
The car wash scene from Cool Hand Luke will do just fine thank you.
Old Gray Mule
I don’t wish to belong to any scene that would have me as a member (with thanks to Groucho Marx).
Bob Spencer, Raw Brit

I’m in with the Out-Crowd
Dave Warner
That’s a hard one, although I do love anything electronic with an indie-pop feel!
Franki

Currently its the Yarra River Trail I’m walking along. Generally my scene would be Melbourne. Nothing feels or compares to home.
Simon McConnell, The Delta Riggs
Well I’m still looking for my scene, and I think I might have found it. Between the pages of What’s My Scene Magazine.
Dave Faulkner, Hoodoo Gurus
No set scene. We have played with a variety of bands from King Parrot to The Datsuns. Offer us a show and give us a try!
Los Hombres Del Diablo

I like to think that I belong to the head-strong Independent Music Scene – where we – musos and audience and everyone in between – all make gigs/tours, recordings, releases happen for ourselves and work our arses off to keep it going for the rest of our lives – all for the love of Music!
Florelie Escano
My scene is driving fast cars and shooting guns.
Ace Frehley
Ep. 1 Series 3 of BBC’s ’Sherlock’ where Sherlock bungee jumps through a window and kisses Molly Hooper.
Miss Adelaide Everheart from Early Burley Burlesque

Going to the river on sunny afternoons with the blow up dingys and resting your beers on lily pads.
The Frowning Clouds
Yass KFC
Simon, Loon Lake

Right now it’s a room with no lights on. An unmade bed. A laptop with 9% battery and a mosquito that just refuses to die.
Dave Larkin, Dallas Crane
It’s Thonbury. It’s my dreaming. I’ve lived here 30 years and it’s evolved with me. The more I drink wine, the more wine bars appear in the neighbourhood. The more I eat, the more cafes appear in the neighbourhood. Fantastic.
Denise Scott, Comedian