With the 24th annual Melbourne Reclink Community Cup just around the corner, The Rockdogs and RRR and PBS Megahertz have revealed the team members that will go head to head in what promises to be one of the biggest clashes on the football calendar this year. On Sunday 25 June Victoria Park is set to come to life with new and veteran players fighting it out to take home that prestigious Cup for another year.

At the helm of the Megahertz, this year is Disco Superstar and PBS ‘Smoke and Mirrors’ presenter CC:Disco! who will lead her fierce and loyal radio presenters onto the field in the hope of taking the cup back from the Rockdogs in 2017. Taking on the all important roll of co-captains and moral builders is RRR’s ‘Get Down’ presenters Chris Gill and PBS breakfast presenter Beth Atkinson-Quinton who are both eager and excited to be playing at Victoria Park for the first time:  “It’s an honour to be representing Triple R and the Megahertz as co-captain alongside Beth AQ, and we’re all excited to be playing at Vic Park for the first time. Finally a home game for the MEGAZ!! A privilege to be raising funds for a great charity – Reclink do so much for those with so little.” – Chris Gill ‘Get Down’ RRR 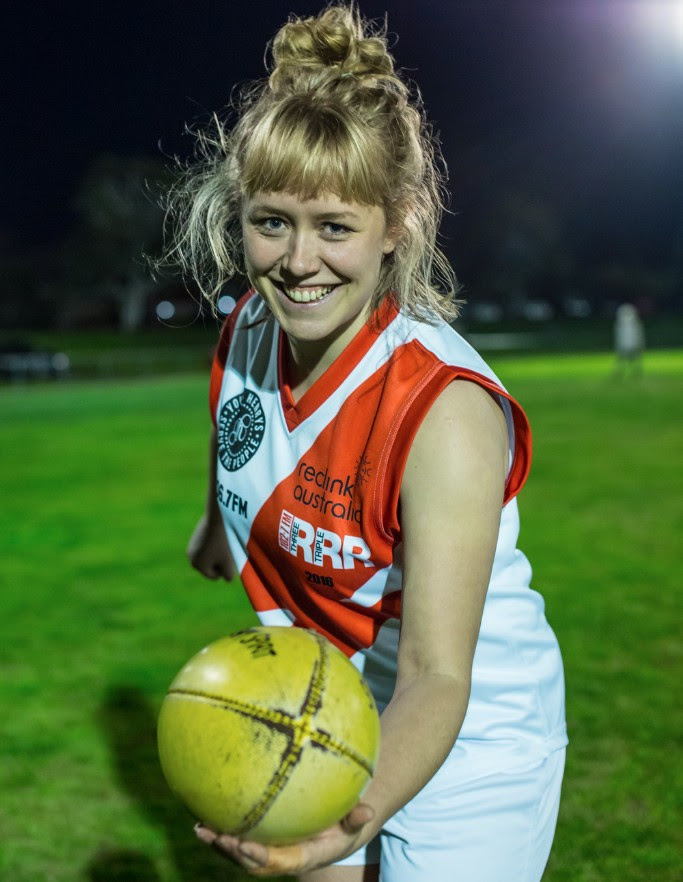 Returning to coach the Rockdogs is ARIA award winner Dan Sultan, no stranger to the game and the team, Dan has elected to coach alongside Jason ‘Evo’ Evans who will be providing his expertise in training and strategy along with music industry veteran Roger Grierson who has taken on the roll of team manager.

Captaining the Rockdogs again and hoping to keep hold of the cup for another year is Music Victoria and My Dynamite’s Nick Cooper who will be assisted by vice co-captainsGlenn Maynard and Kate Boston-Smith, long time player who has moonlighted on both sides, but now calls herself a Rockdog. Says Boston Smith (Modesty) who is thrilled to be supporting Reclink Australia once again – “Reclink Community Cup is the best way to warm a wintery Sunday. It’s like an urban festival with footy, bands, babies, kids, DOGS and a whole bunch of your mates who just happen to make up this awesome community and it’s all for a great charity supporting disadvantaged Australians. What could be better?!” 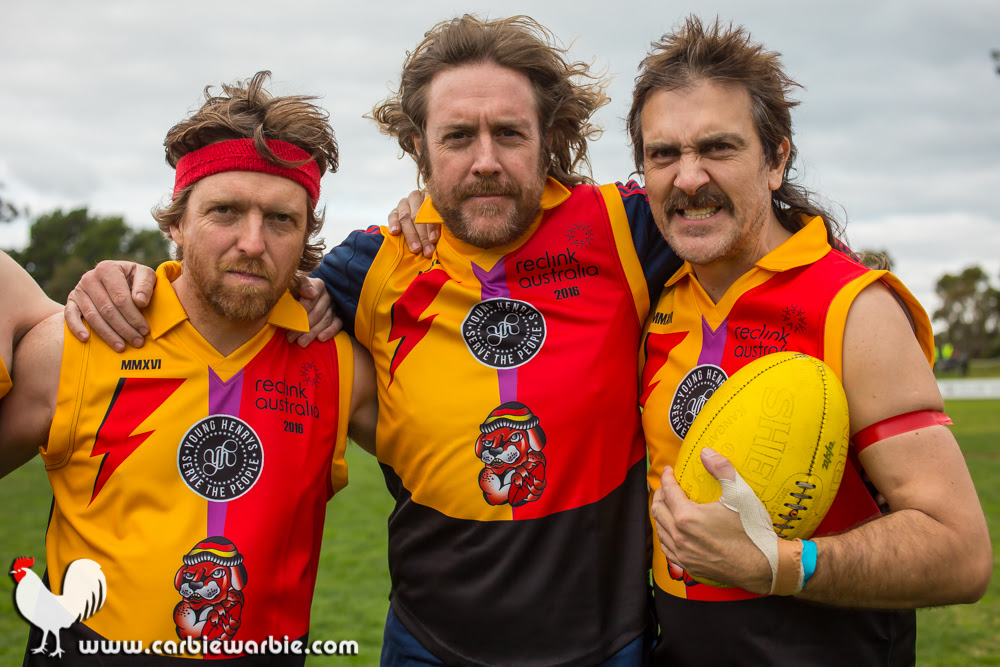 Also, making a debut at The Reclink Community Cup is PLAYERTEK by Catapult Sports, a GPS and sports analyst-tracking device that will be worn by 10 players from each team on game day, which will deliver some incredible stats post game.

Catapult CEO Joe Powell said, “We are proud to support a much-loved sporting event like the Reclink Community Cup. Our Catapult athlete monitoring devices are used by all AFL players and coaches to both enhance performance and mitigate injury risk. We can track how high a player jumps, how far or fast they run and collect more than 940 pieces of data per second. We cannot wait to put PLAYERTEK by Catapult devices on Community Cup legends like Nick Cooper and Beth Atkinson-Quinton and get a read on their performance from the match. The data and insights from a PLAYERTEK by Catapult device can help these players strive to take their game to the next level and provide some bragging rights over their competitors.”

Spiderbait, The Peep Tempel, Jen Cloher, and REMI will all perform live sets, along with Aussie legends Deborah Conway and Willy Zygier with She Said Zed performing ‘Streets of Your Town’ – a tribute to The Go-Betweens and the 2017 theme. For the big and little kids alike, the original cardboard warriors Boxwars will bring destruction to the Community Cup field for the first time, Wally Meanie and Murray Wiggle will get the crowd dancing before the game with Bubblegum Machine.

Funds raised through the Reclink Community Cups support Reclink Australia’s work with disadvantaged communities across Australia. From its inception back in 1993, the Melbourne event now rallies more than 10,000 avid followers who collectively raise over $100,000 every year for the cause.

Patti Smith’s Horses 40th anniversary tour didn’t come to us, so in true Aussie style ‘we’ took things into our own hands and brought Horses to the Melbourne Town Hall sans Smith. That’s not to […]

Australian rock’n’roll royalty came together at Melbourne’s Forum Theatre on Tuesday 19 December 2017 to honour the music of Stevie Wright and The Easybeats, as they brought the EasyFever tour to a close. The supergroup of Chris Cheney (The Living End), Phil Jamieson (Grinspoon), Kram (Spiderbait), Tex Perkins (The Cruel Sea, Beasts of Bourbon), and Tim Rogers (You Am I) performed a power-packed musical journey celebrating the legacy of The Easybeats, their legendary singer Stevie Wright, and the songwriting catalogue of Harry Vanda & George Young. […]

For the month of May, leading up to the Sydney Drum & Percussion show, What’s My Scene will be celebrating DRUMMERS. Stay tuned for our exclusive Q&As, Snap Scene features, and much much more.  JEN SHOLAKIS Bands: […]

Tegan Voltaire, The Voltaire Twins
The car wash scene from Cool Hand Luke will do just fine thank you.
Old Gray Mule
It’s beards.
Nathaniel Beard, The Beards
I love being on a little boat near home in South West Victoria with a fishing line in the water, the Sun coming up or going down. I also love walking the streets of Melbourne or Manhattan or many of the beautiful towns and villages of Ireland or anywhere. My partner and my family are central to it all. I also love being in the midst of a great music session, anywhere, anytime, being transported into the soul of the Universe.
Shane Howard
If you’re a Max Chillington then you’re our scene.
Gunslingers
Wherever there is music is where I feel most at home
Toby Robinson
Beer, riffs, good people, good food and new adventures, anywhere those things exist, that’s my scene!
Andy, Don Fernando
Currently its the Yarra River Trail I’m walking along. Generally my scene would be Melbourne. Nothing feels or compares to home.
Simon McConnell, The Delta Riggs
I am a simple man. My scene is simple. I like playing metal and spending time with my family.
Waclaw ”Vogg” Kieltyka, Decapitated
We can be dirty, we can be imperfect, we can be classy, it doesn’t matter. We drift between scenes and eventually may just create our own.
The Ugly Kings
Art is my scene. No labels, restrictions or judgement. I love art in all it’s varied glory.
The Last 5 Queers
It’s a delirium, really, but I like to live like this.
Hugo Race
I like to be out in the nature, to get away. Go to the woods. My dad lives in the woods. Maybe once or twice a year I don’t have phone reception there is no Wi-Fi
Fredrik Åkesson, Opeth
Fuck the Fucking Scene question! xo
Fuck The Fitzroy Doom Scene
Aside from music and everything creative, I love open-mind people, unexpected humour, seeing the world and nature, riding my bicycle, playing billiards. I’m also a fan of coffee, whiskey and most things vintage.
Jessica Stuart Few
Alice likes the Google. Sime likes taxidermy. It’s a pretty happening scene.
Sweet Jean
The Astor Theatre on chapel st. Old cinema with copious amounts of atmosphere playing classic films (Chaplin, Gene Kelly, Kubrick, etc) and me with a honeycomb choc top spilt on my Tshirt because that’s just how I roll.
Jude Perl, Comedian
Well these days my scene tends to revolve around my computer and being nudged by my dog to take her out for a walk. And then having my wife shout at me for spending time on my computer. I’m loving it actually. I’m quite relishing that scene. I miss them both very much.
Peter Hook, Joy Division/New Order/The Light
World/folk. Acoustic and proud of it!
Ilana Cravitz, The London Klezmer Quartet
I don’t wish to belong to any scene that would have me as a member (with thanks to Groucho Marx).
Bob Spencer, Raw Brit
Quirky cabaret bars that serve a mean G&T and boast a stellar cocktail list..which is why you’ll always find me returning to The Butterfly Club! I also love the buzz of a Fringe or Cabaret Festival, or a smart Opening Night. Any excuse for a dress up, really!
Amelia Ryan, Lady Liberty
I like the beach more than anything. The beach feels like home all year round. In terms of a scene…I actually prefer to hermit most of the time.
Abbe May
Experimental electronica, musical metacreation, multiplicitous media, hacking.
Ollie Brown
The TV show “Full House
World Wild
My scene is finding any excuse to dance with my 2 year old daughter Ruby.
Matthew Hardy, Comedian
I think my style is more just making cameos in everyone else’s scene.
Mojo Juju
I like to think that I belong to the head-strong Independent Music Scene – where we – musos and audience and everyone in between – all make gigs/tours, recordings, releases happen for ourselves and work our arses off to keep it going for the rest of our lives – all for the love of Music!
Florelie Escano
I’m in with the Out-Crowd
Dave Warner
Our scene is folk that are interested in change. Not just music, but breaking the norm, the boundaries and stereotype of Australian ’rock/pop’ music. Unpredictable, the question marks, the new jokers in town. Don’t Believe The Haze.
Slumberhaze
Cool small bars with good food, good wine, good company
The Backsliders
Going to the river on sunny afternoons with the blow up dingys and resting your beers on lily pads.
The Frowning Clouds
Ep. 1 Series 3 of BBC’s ’Sherlock’ where Sherlock bungee jumps through a window and kisses Molly Hooper.
Miss Adelaide Everheart from Early Burley Burlesque
Bed. Pringles. Whisky. Attenborough doco. Wham.
Marlon Williams