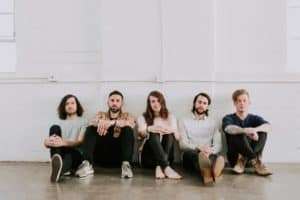 MAYDAY PARADE has released “Never Sure,” the second song from their upcoming album, SUNNYLAND.

Set for a June 15th release, SUNNYLAND is the band’s 6th studio album and first with Rise Records. Fans who pre-order the album by clicking HERE will receive “Piece Of Your Heart” and “Never Sure” as an instant download.
[pullquote]”Never Sure is about this tendency to be more in love with the chase or in love with love, than the actual object of the love. It’s about being dramatic for dramas sake really.” adds guitarist Alex Garcia. [/pullquote]Over the course of the last 10 years, Mayday Parade has sold more than a million albums. Four of their releases have sold over 100,000 units each, with their most successful album (2007’s A Lesson In Romantics) selling more than a half-million copies. They have 60+ videos on YouTube with over 1 million views, and their songs have amassed over 350 million streams in the US alone.
The Tallahassee, Florida-based quintet (rounded out by bassist/vocalist Jeremy Lenzo, guitarist Brooks Betts and drummer/vocalist Jake Bundrick) recorded this follow-up to 2015’s Black Lines with longtime producers Zack Odom and Kenneth Mount, and for the first time, also teamed with Grammy nominated producer John Feldmann (blink-182, Panic! At the Disco) and Howard Benson (Of Mice & Men, My Chemical Romance). The result is an album built on impassioned vocals, sing-along choruses, and deeply heartfelt lyrics.
Mayday Parade’s new album SUNNYLAND will be released on Friday June 15. It can be pre-ordered at https://riserecords.lnk.to/sunnyland. For more information, go to http://maydayparade.com

‘UNBROKEN’ IS THE FIRST NEW MUSIC FROM ICONIC LINEUP IN OVER 10 YEARS SINGLE OUT FRIDAY AUGUST 16 ON ALL PLATFORMS TBE ‘AMPLIFIED ALE’ IS A COLLABORATION WITH GREEN BEACON BREWING The Butterfly Effect return! Clint, Kurt, Ben and Glenn have not […]

Brisbane new-nu-metal outfit Serene have put a new track out into the world – a bone-achingly hard-hitting track entitled Stay Awake. The new track is out now in iTunes, Apple Music, Spotify and all good digital outlets. […]

When I’m not working in the studio or doing shows I’m at home with my partner and our baby so I guess they are my scene.
Way of the Eagle
My scene is finding any excuse to dance with my 2 year old daughter Ruby.
Matthew Hardy, Comedian

Going to the river on sunny afternoons with the blow up dingys and resting your beers on lily pads.
The Frowning Clouds
Yass KFC
Simon, Loon Lake

My scene is driving fast cars and shooting guns.
Ace Frehley
Our scene is in the city of Bath, a small city with a very big musical identity, we play the British festivals and I am also in the ’choirs scene’. We are also in other bands for fun, music all the way, roll on summer!
Su Hart, Baka Beyond

I love being on a little boat near home in South West Victoria with a fishing line in the water, the Sun coming up or going down. I also love walking the streets of Melbourne or Manhattan or many of the beautiful towns and villages of Ireland or anywhere. My partner and my family are central to it all. I also love being in the midst of a great music session, anywhere, anytime, being transported into the soul of the Universe.
Shane Howard
The beach. Tea with gin at your grandparents house. They have the best stories.
Betty & Oswald

Right now it’s a room with no lights on. An unmade bed. A laptop with 9% battery and a mosquito that just refuses to die.
Dave Larkin, Dallas Crane
Tunes, mates, and honesty. No dickhead policy!
Buddha In A Chocolate Box
Well I’m still looking for my scene, and I think I might have found it. Between the pages of What’s My Scene Magazine.
Dave Faulkner, Hoodoo Gurus
I just do my best to live a life full of the things I love. Rock’n’roll, photography, New York City – they are three things right there that I love a lot!
Paul Miles

The car wash scene from Cool Hand Luke will do just fine thank you.
Old Gray Mule
I’m in with the Out-Crowd
Dave Warner
Anyone who welcomes a hairy, gold wearing, hot air blowing idiot to a dinner table is my scene.
Henry Wagons