MARTY-WILLSON-PIPER is best known for his decades-long involvement with THE CHURCH, but also decade with ALL ABOUT EVE and as a collaborator with Grace Slick, Aimee Mann, Susannah Hoffs and Linda Perry,but also through his current involvement in MOAT and Anekdoten. You also know Noctorum-mate producer DARE MASON through his work with The Grid, The Church, Placebo, Brix Smith (ex The Fall), Cinerama andTommy Tokyo and also Prince, Paul McCartney, Boy George, Tina Turner, Ravi Shankar and Soul II Soul before that.Ahead of this, they present the single ‘The Moon Drips’, about which Louder Than War says “Marty Willson-Piper is still at his pinnacle as far songwriting and performance goes. 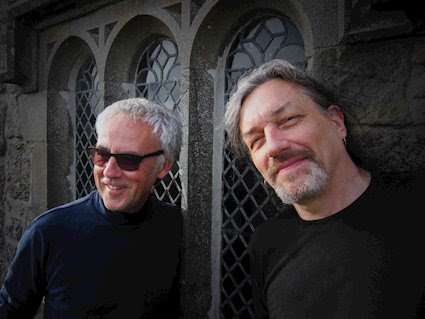 Piccadilly Circus in the Rain

Girl With No Love

Making of The Afterlife Part 2

A breath of fresh air with just the right mix of upbeat instrumentation and an attractive tandem of male and female vocals. Gentle, mellifluous guitar lines are whisked about by a brisk drum beat, while Willson-Piper’s sweetly soft and fluid vocals offer up a bittersweet portrait of Londontown… superb and stands up to anything ever released by The Church or All About Eve” – Big Takeover Magazine”Bristling with energy and rock and roll groove but retaining that slight psychedelic infusion that served his formative band so well, it is that trade off between its underground nature and hooky accessibility that will see it pick up fans across the spectrum” – Dancing About Architecture”Everything we’ve heard from the new Noctorum album gives every indication that this is a smashing album and that Marty Willson-Piper is still at his pinnacle as far songwriting and performance goes… Dare Mason’s production up to par with his past works for The Church, Placebo, The Grid, Brix Smith (ex The Fall) and Cinerama” – Louder Than WarNoctorum, a duo comprised of guitarist/singer-songwriter Marty Willson-Piperand producer Dare Mason, present their new single ‘The Moon Drips’ ahead of their fourth album ‘The Afterlife’ and following the singles ‘Piccadilly Circus in the Rain’ and ‘A Girl With No Love’.This is the duo’s first long-play in seven years. Slated for release on February 15, this album will be made available on heavy-weight gatefold vinyl, CD and digitally via Schoolkids Records. Fortunate PledgeMusic contributors received an advance copy after Noctorum’s campaign successfully achieved 113% of its target for the album.&lsquo;The Moon Drips is the album’s opening track. It tells the tale of a perilous journey on a mysterious caravan that takes the unwitting across the Texan-Mexican border to a geographically impossible jump, landing in Bohemia and Prussia. As these two worlds collide, winds howl, trumpets blast, violins yearn and 19th century sequencers outmode harpsichords as creatures of the night fly silhouetted against the glowing disc of the moon, a backdrop for realised shadows as they pounce on reality itself.Named for the village Noctorum, located near to their childhood homes on The Wirral (near Liverpool), Dare and Marty liked its association with night and its Latin derivation.

This collaboration has an eclectic focus, making the quiet loud and vice-versa, singing words that might be spoken and playing indoor instruments that should be heard outside. It has to be imagined to exist.Formed in 2002, Noctorum released their debut album ‘Sparks Lane’ on Heyday Recordsin 2003. In 2006, they followed up with the album ‘Offer The Light’ on that same label,later re-releasing it as a digipak in 2010 via Second Motion Records. Heyday released their third album ‘Honey Mink Forever’ in 2011.Marty Willson-Piper has been writing and performing internationally for over 35 years. He is best known as a long-time member of Australian psychedelic rock band The Church, who he was with from its inception through to 2013. He joined All About Eve in the ’90s, releasing two studio albums and several live albums with them. He is also lead singerand lyricist with Swedish band MOAT and a touring member of Swedish Prog legends Anekdoten.

Since the mid-1980s, Willson-Piper has maintained a steady solo output, releasing six solo studio albums and three live solo albums to date. He has also co-written music with many artists, including Grace Slick, Aimee Mann, Susannah HoffsandLinda Perry.As a house engineer at London’s world famous Townhouse Studios, Dare Mason has worked with the likes of Prince, Paul McCartney, Boy George, Tina Turner, Ravi Shankar and Soul II Soul, among others. After becoming a freelance producer/engineer in 1991, he produced albums for The Grid, The Church, Placeboand AC Acoustics, working in London, New York, Sydney and Stockholm. He finally moved to Cornwall, where he set up the VIP Lounge studio in 2001. Nowadays, Dare is mainly known as a mixing engineer, having mixed recordings byBrix Smith (ex The Fall), CineramaandTommy Tokyo. Dare is also a composer, songwriter and accomplished guitarist, singer and dabbler in keyboards, usually contributing musically to the artists he produces.All three singles are now available across online stores and streaming platforms like Spotify. The full album ‘The Afterlife’ album will be released on February 15, and can now be ordered in all formats via Schoolkids Records.

Recorded and mixed by Dare Mason at the VIP Lounge, Penzance, England

Tegan Voltaire, The Voltaire Twins
That’s a hard one, although I do love anything electronic with an indie-pop feel!
Franki
World/folk. Acoustic and proud of it!
Ilana Cravitz, The London Klezmer Quartet
My scene is finding any excuse to dance with my 2 year old daughter Ruby.
Matthew Hardy, Comedian
Any scene with Al Swearangen & Mr. Wu from the show Deadwood ;)
Mathas
Currently its the Yarra River Trail I’m walking along. Generally my scene would be Melbourne. Nothing feels or compares to home.
Simon McConnell, The Delta Riggs
My bedroom
Nantes
Our scene is in the city of Bath, a small city with a very big musical identity, we play the British festivals and I am also in the ’choirs scene’. We are also in other bands for fun, music all the way, roll on summer!
Su Hart, Baka Beyond
“Malcolm Hill is a lifetime member of the Melbourne Music Mafia and part of the ratpack of post punk Melbourne artists who have been keepin’ it real across diverse art forms for thirty years.”
Malcolm Hill
When I’m not working in the studio or doing shows I’m at home with my partner and our baby so I guess they are my scene.
Way of the Eagle
The beach. Tea with gin at your grandparents house. They have the best stories.
Betty & Oswald
Our scene is this big gorgeous wide world we live in all its majestic splendour!
Kim Salmon, The Darling Downs
Local bands at sticky carpet venues. Vinyl. Social networking. Keeping healthy in order to play full throttle live sets. Loud rehearsals. Good people with creative ideas. PRIMITIVE ROCK.
Jon S Williams of City of Cool
I will continue the continuum, singing my Songline.
Kutcha Edwards
The Astor Theatre on chapel st. Old cinema with copious amounts of atmosphere playing classic films (Chaplin, Gene Kelly, Kubrick, etc) and me with a honeycomb choc top spilt on my Tshirt because that’s just how I roll.
Jude Perl, Comedian
Staying home out of harms way.
Peter Milley, Cairo Club Orchestra
Our scene is folk that are interested in change. Not just music, but breaking the norm, the boundaries and stereotype of Australian ’rock/pop’ music. Unpredictable, the question marks, the new jokers in town. Don’t Believe The Haze.
Slumberhaze
The car wash scene from Cool Hand Luke will do just fine thank you.
Old Gray Mule
Aside from music and everything creative, I love open-mind people, unexpected humour, seeing the world and nature, riding my bicycle, playing billiards. I’m also a fan of coffee, whiskey and most things vintage.
Jessica Stuart Few
If you’re a Max Chillington then you’re our scene.
Gunslingers
Cool small bars with good food, good wine, good company
The Backsliders
Beer, riffs, good people, good food and new adventures, anywhere those things exist, that’s my scene!
Andy, Don Fernando
No set scene. We have played with a variety of bands from King Parrot to The Datsuns. Offer us a show and give us a try!
Los Hombres Del Diablo
Well these days my scene tends to revolve around my computer and being nudged by my dog to take her out for a walk. And then having my wife shout at me for spending time on my computer. I’m loving it actually. I’m quite relishing that scene. I miss them both very much.
Peter Hook, Joy Division/New Order/The Light
Art is my scene. No labels, restrictions or judgement. I love art in all it’s varied glory.
The Last 5 Queers
All the kids who weren’t cool at school and still aren’t. Those people who didn’t manage to become awesome artists and uber hip performers. The raggy dolls who never found a way to make their raggy doll-ness work for them.
Jonathon Duffy
Fuck the Fucking Scene question! xo
Fuck The Fitzroy Doom Scene
Our gigs have an air of danger and sex. Beautiful women are free to express themselves and are as dangerous as hell. Everybody can have a good time ’cos there’s a lot of love in the room and we just can’t help but stomp out that primeval swamp boogie ooze.
Chris Russell’s Chicken Walk
Leadfinger is a very strange band, hard to define, but we are free.
Stew, Leadfinger
My scene is a Punk-hardcore scene or an underground, minimal electronic scene, something grungy – where everyone is wearing black. That’s my vibe; don’t go out until 11 when all the other vampires come out and go home when the sun comes up at 7. Oh shit. Creatures of the night.
Greg Puciato, Killer Be Killed & Dillinger Escape Plan
I think my style is more just making cameos in everyone else’s scene.
Mojo Juju