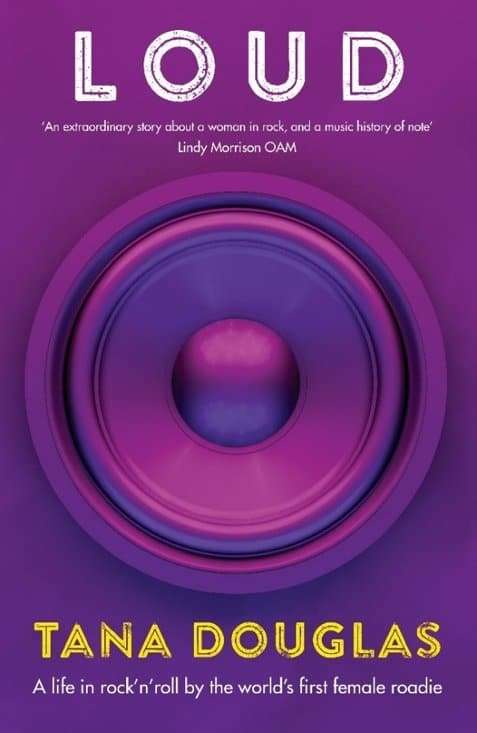 TANA DOUGLAS is a trailblazer. A gamechanger. Groundbreaker. An Australian legend. Tana is the first women roadie in the world. LOUD (ABC Books, 11 February 2021) is a memoir of a massive life, toured large and wide, lived on the road, off stage, from AC/DC to Elton John. Volume cranked to eleven. This is as good as rock bios get. What goes on tour stays on tour – unless you’re the first woman roadie in the world.

At just fifteen, Tana Douglas ran away to the circus that was rock’n’roll in the 1970s, taking a job with a young band called AC/DC. While still a teenager she headed to the UK and later the US to work for a who’s who of bands and artists. Life on the road was exhilarating, hard work, occasionally surreal but never dull, particularly when you’re the only woman in the road crew and the #metoo movement is still 40 years away.

Whether wrangling Iggy Pop across Europe, climbing trusses while seven months pregnant, drinking shots of JD with Bon Scott backstage at Wembley, or donning a tailor-made suit to do lights for Elton at Windsor Castle, Tana did it all.

Funny, poignant, reflective and revealing, Loud is rock n roll like you’ve never experienced it before, by a woman who not only survived the all-male world of touring but climbed to the top and lived to tell the tale.

“This is much better than any other roadie book. It’s an extraordinary story about a woman in rock and the way she had to behave to get ahead, the sacrifices and so on, so many lessons but then this is also a rock history of real note.”

Includes tales from the tour buses of:

Tana Douglas was fifteen when she took her first job as a roadie with AC/DC. Now recognised as the world’s first female roadie, Tana has worked alongside some of rock’n’roll’s biggest names in a career spanning three continents and more than 30 years. Tana currently resides in Los Angeles, California. Loud is her first book.

On the eve of tickets going on sale tune into AC/DC Live At River Plate Airing Friday the 17th April on the Nine Network This Friday night, ahead of the ROCK OR BUST national tour […]

Tegan Voltaire, The Voltaire Twins
I like to be out in the nature, to get away. Go to the woods. My dad lives in the woods. Maybe once or twice a year I don’t have phone reception there is no Wi-Fi
Fredrik Åkesson, Opeth
I have no idea what my scene is; I have been listening to Dubstep and a bit of Drum N Bass. I found a lot of Hip Hop and RnB stuff is getting very interesting again it is pushing different sounds out. I’ve been really into cycling since the early ‘90s; racing mountain bikes and racing road bikes. So between cycling and music there is not much time left, a bit of sleep now and again.
Mike Edwards, Jesus Jones
Book clubs, philosophy and extreme black metal
Elsen Price
The TV show “Full House
World Wild
My scene is driving fast cars and shooting guns.
Ace Frehley
Ep. 1 Series 3 of BBC’s ’Sherlock’ where Sherlock bungee jumps through a window and kisses Molly Hooper.
Miss Adelaide Everheart from Early Burley Burlesque
Act III, Scene VI of King Lear. A tense and gripping scene wherein the ageing king informs his three daughters that they have all been accepted as contestants on Family Feud.
Ben Pobjie, comedian
Scones, savory, sweet I don’t mind
The Wooden Sky
“Malcolm Hill is a lifetime member of the Melbourne Music Mafia and part of the ratpack of post punk Melbourne artists who have been keepin’ it real across diverse art forms for thirty years.”
Malcolm Hill
The beach. Tea with gin at your grandparents house. They have the best stories.
Betty & Oswald