Hey guys! So my new single is called Heart Back, it’s a very personal song for me, and was actually really confronting to write, but writing is my way of processing things that happen to me and helps me manage my anxiety.

Heart Back is about the moment when you fall apart and feel like the tiny little pieces of your heart that are lost when something tragic happens might never be put back together. It was written the night my dad told us he had prostate cancer, I was standing there watching his face and my mum’s reaction and realised that nothing might ever be or feel the same.

I guess I went to my safe place which is the piano – I was just bawling my eyes out sitting there and it just came pouring out. Actually the chorus was more like screeching when I first wrote those lyrics “can you put my heart back”.

I guess content-wise it’s pretty dark but I do honestly believe a lot of people resonate with that tragic pain, because I feel like whether it’s a lost relationship, death or someone is sick, that pain is universal and we all feel it at one point or another.

I took the bones of the song to Msquared (my producers) and they were like we have to do this song, and I just remember telling them the story and how I wanted it to feel and them playing back their ideas to me and I could not believe how they got me, and the track and then Heart Back was born.

Tequila is a food right??? Haha! I mean for me tequila is painful to drink and but you keep going back for more…I feel like this song is like that, it makes you feel sad but there is something beautiful about it that makes you want to keep listening. I mean that’s how I feel about it anyway – it is so painful to listen to but I keep going back, maybe I enjoy pain? Weird right haha!

Heart Back is literally my soul laid bare on a track and for me that’s why it’s the one I resonate with the most, I feel like it’s the truest thing I’ve ever created.

So after a gig I always order milk! I know, imagine being the bartender and this heavily tattooed girl with purple hair comes up and orders a pint of milk? It’s this strange thing that I started doing years ago and it just stuck! Milk is actually an anti-inflammatory so it soothes the voice after a show, but people do look at you strange!

Inspiration for me has always come from things that have directly impacted me. I mean if it’s actually something I have lived, it is real and honest when I write or sing it, music for me has to be that, or I can’t seem to connect properly. Even if I write a lyric idea and take it to the Msquared boys I’m always like this is how I want it to feel, and this is the story… then they have to sit there while I tell them all the private bit of my life hahaha poor guys!

That’s easy! Red by Daniel Merriweather – to me it’s a perfect song, and I bawl my eyes out every single time I hear it! His voice is so powerful and the emotion conveyed gets me every time, if you haven’t heard him sing it live do yourself a favour and watch it… life changer.

I’ve almost finished my debut EP which is a collection of songs I’ve been working on with Msquared and I can’t wait to put it out, like everything I write its emotionally driven, but not all sad – even though I tend to be drawn to sad music! But there are love songs and party vibes on there too!

I’m currently putting together a killer live band and we will be going on tour really soon! I cannot wait!!! Onstage has always felt like my home! Performing has really helped me get through a lot in my life – anyone with anxiety will know that constant noise of your brain going a million miles an hour, well, the only time mine ever stops is onstage. It’s such a weird thing but I’m drawn to the silence that comes when I’m performing it’s like the emotion or something blocks out my annoying overthinking and I get peace and quiet for that small time!

I feel like I could exist in a whole lot of different scenes, I guess when I’m writing I’m not necessarily thinking of one scene in particular, haha. I like to take a lil bit from here and a lil bit from there! But let’s say I float between the land of pop and indie and those that are super emotional – does that make me emo? Haha they are my scene too, all the emotional people!

Colourful and unique, LA. Faithfull has today announced her new single Heart Back, a gut-wrenching pop smash with a clear, vulnerable message, available now.  This exciting newcomer has also released a raw, expressive video that conveys the truth behind the song through dance and visuals, and this effective clip has already racked up over 50,000 plays since its release.

Heart Back is raw, in every sense of the word.  Produced by the legends at M Squared Productions (NUSSY, Imogen Brough), and evocative of Amy Shark’s heavy, hip-hop inspired beats, Heart Back is some seriously fresh pop from LA. Faithfull, otherwise known as Lisa Anne Faithfull.  The chorus soars, with sharp, synth-laden production that nods towards Lorde’s renowned debut LP Pure Heroine, and Faithfull’s voice is the soft, reassuring comfort throughout.  The song was inspired by a difficult time in her life, as she reflects, “Heart Back is about the moment when you fall apart and realise that maybe no one will ever be able to put back together those tiny pieces of your heart that feel like they are lost when tragedy strikes.  I actually wrote the lyrics the night I found out my dad had prostate cancer…I was going through the motions of looking at my dad’s face when he had to tell us, and watching my mum’s reaction of pure fear – and then feeling that it will never be the same again…even when you have good days, you’re always worried about the next bit of bad news.”

The clip for Heart Back is stark; set in a grey, industrial landscape, yet manages to show that beauty can exist and thrive in any dark situation.  Faithfull stands alone, in this concrete space, surrounded by the lyrics of the song written in chalk across the walls.  A skillful dancer expressively moves through the space, interpreting the music in a way that words could never.  Speaking about the process of making the clip, Faithfull says, “The idea is that the white, concrete space represents the mind.  We spent hours covering the walls, pillars and floor with the lyrics of the song, which represents the feeling of anxiety – where you’re trapped in your mind going over and over your thoughts.  The dancing  represents the pain, and sometimes the dance is beautiful but that’s because I feel that sometimes pain isn’t ugly.  The camera angles and filming were the reason I asked the incredibly talented Connor Dalton (Slowly Slowly) to film it.  He’s one of my best friends and has a incredible eye for angles, and while some people might have all set shots and steady shots, instead for us the camera is constantly moving like a whirlwind, which is how this song feels in my head.”

With a tour set to be announced shortly, this thrilling indie pop artist cannot wait to show the world what she was born to do, saying “As a kid growing up with anxiety I was awkward, had almost no social skills and my mind would run 24/7.  But…put me onstage with a mic and it was like silence – no anxiety at all, and it just felt like home!  The stage is one of the only places my mind is still, calm and silent, and maybe that’s why I’m so drawn to being onstage!”

Heart Back is available now  BUY: HEART BACK 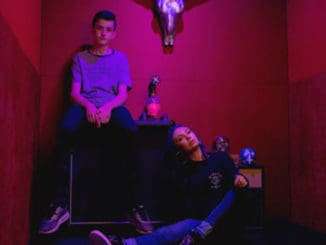