Kicking off what is set to be a massive 2019, Jon Stevens is back on the road with his aptly named Raining Hits tour, featuring not only all the greatest hits from his extensive back catalogue, but also the iTunes Australian Rock and Indie Rock #1 track Rain Down On Me. The tour, which runs through until April, features highly anticipated headline shows, special guests and festival appearances. Jon will rock out the hits from not only his solo career, but also Noiseworks and INXS.

With a back catalogue jam-packed with smash hits, and no shortage of great

songs to choose from, the revered singer-songwriter is looking forward to

reliving the different times of his musical journey, and sharing those

experiences with audiences. With an extensive back catalogue of hit songs

included in the setlist, the show is guaranteed to delight.

since he first started out in the industry as a young musician. He really

needs no introduction to Australian audiences; a revered singer-songwriter

within his own right, he has fronted some of the most legendary Aussie

brought his career full circle, showcasing an impressive musician whose 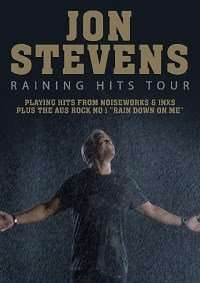 Launching his career back in his home of New Zealand as a teenager, Jon

Stevens already had two #1 singles by the tender age of 16. Fast forward to

airwaves with singles such as No Lies, Love Somebody, Take Me Back, Touch

and In My Youth to name a few. They were the embodiment of what Aussie rock

was and should be – hard-hitting, talented and they put on a bloody good

show. Never one to rest on his laurels, Jon Stevens didn’t stop working

when Noiseworks when on hiatus. He followed up with solo albums, multiple

stints in stage productions such as Jesus Christ Superstar and earned

world-wide acclaim taking centre stage with INXS. His next band – The Dead

Daisies – stepped up that international reputation with the debut single

Lock and Load featuring the legendary Slash on guitar.

Whether touring with INXS, doing the festival circuit with Noiseworks,

playing his own headline solo shows to packed houses, one thing has always

been consistent with Jon, it is, and always will be, about the music. His

hard work over the years has truly paid off, as Jon Stevens is considered

one of the country’s premier artists and a legend on the live music scene.

Get your tickets to Jon Stevens Raining Hits tour now.

I like to think that I belong to the head-strong Independent Music Scene – where we – musos and audience and everyone in between – all make gigs/tours, recordings, releases happen for ourselves and work our arses off to keep it going for the rest of our lives – all for the love of Music!
Florelie Escano
My scene is at the moment Big Wongs General Tsos Chicken as I get sauce on the keys typing to you :-)
Brian Mackey

My scene is driving fast cars and shooting guns.
Ace Frehley
World/folk. Acoustic and proud of it!
Ilana Cravitz, The London Klezmer Quartet

Flanelette pyjama pants.
Timberwolf
“Malcolm Hill is a lifetime member of the Melbourne Music Mafia and part of the ratpack of post punk Melbourne artists who have been keepin’ it real across diverse art forms for thirty years.”
Malcolm Hill

I’m in with the Out-Crowd
Dave Warner
Aside from music and everything creative, I love open-mind people, unexpected humour, seeing the world and nature, riding my bicycle, playing billiards. I’m also a fan of coffee, whiskey and most things vintage.
Jessica Stuart Few

I love being on a little boat near home in South West Victoria with a fishing line in the water, the Sun coming up or going down. I also love walking the streets of Melbourne or Manhattan or many of the beautiful towns and villages of Ireland or anywhere. My partner and my family are central to it all. I also love being in the midst of a great music session, anywhere, anytime, being transported into the soul of the Universe.
Shane Howard
Right now it’s a room with no lights on. An unmade bed. A laptop with 9% battery and a mosquito that just refuses to die.
Dave Larkin, Dallas Crane
Yass KFC
Simon, Loon Lake