Welsh band Joanna Gruesome has unveiled the fantastically catchy ‘Honestly Do Yr Worst’, the first single proper to be taken from their much anticipated new album Peanut Butter, due to enter the world on May 8th via Caroline Australia and Turnstile. A song about espionage, rival groups and the radical possibilities of peanut butter spread, the single is the perfect encapsulation of the band’s combination of hyper-melodic pop music and sonic violence. Stream the single via Soundcloud now:

Like their debut, the new album was recorded by MJ from Hookworms, with the aim of heightening the group’s “pop” and “aggressive” elements to excessive and hitherto unrecorded levels and contains a record number of hooks, traces of nut and elements of jangle pop, British hardcore punk, atonal music, screaming and drone organs. As songwriter Owen Williams explains: “We tried to make it shorter, more economical and attempted to pack as many hooks and screams in as quickly possible in order to avoid short changing the consumer or wasting her/his/their time. Lyrically it’s more obtuse and surreal but also attempts to mock trad masculine rock themes whenever things do get more lucid. But sometimes musically we embrace them by doing embarrassing guitar solos.” 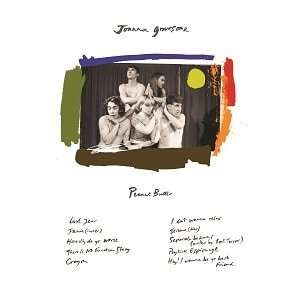 Comprised of Alanna McArdle (vocals), Owen Williams (guitar), Max Warren (bass), George Nicholls (guitar) and David Sandford (drums), the band all originally met on a wine tasting holiday. Their terrific debut album Weird Sister took the world by storm when it was released in September 2013, going on to win last year’s Welsh Music Prize. Fantastic press support saw glowing press reviews across the board with particular love from Pitchfork and from NME, including a spot on the front cover as part of their Rule Britannia issue, as well as live coverage from The Guardian, Observer and The Independent. At radio their singles have scored a remarkable four out of four on the BBC 6Music playlist and the band have played sessions for both Lauren Laverne on 6Music and for Huw Stephens on Radio One.

I like to think that I belong to the head-strong Independent Music Scene – where we – musos and audience and everyone in between – all make gigs/tours, recordings, releases happen for ourselves and work our arses off to keep it going for the rest of our lives – all for the love of Music!
Florelie Escano
Comedy, surreal show girls, burlesque and theatre
MC KREWD

I love being on a little boat near home in South West Victoria with a fishing line in the water, the Sun coming up or going down. I also love walking the streets of Melbourne or Manhattan or many of the beautiful towns and villages of Ireland or anywhere. My partner and my family are central to it all. I also love being in the midst of a great music session, anywhere, anytime, being transported into the soul of the Universe.
Shane Howard
When I’m not working in the studio or doing shows I’m at home with my partner and our baby so I guess they are my scene.
Way of the Eagle
I just do my best to live a life full of the things I love. Rock’n’roll, photography, New York City – they are three things right there that I love a lot!
Paul Miles

Leadfinger is a very strange band, hard to define, but we are free.
Stew, Leadfinger
If you’re a Max Chillington then you’re our scene.
Gunslingers

Right now it’s a room with no lights on. An unmade bed. A laptop with 9% battery and a mosquito that just refuses to die.
Dave Larkin, Dallas Crane
Hiking a 14K foot mountain in Colorado
Cole Washburn

My scene is driving fast cars and shooting guns.
Ace Frehley
What’s my scene? well…
And another thing I’ve been wondering lately
Oh, baby,
Tell me where have you been?
Now the stage is set
Where’s my Juliet, baby?
Is it maybe
My Midsummer Night’s Dream?
What’s my scene?
Clowns

Going to the river on sunny afternoons with the blow up dingys and resting your beers on lily pads.
The Frowning Clouds
My scene is at the moment Big Wongs General Tsos Chicken as I get sauce on the keys typing to you :-)
Brian Mackey

Currently its the Yarra River Trail I’m walking along. Generally my scene would be Melbourne. Nothing feels or compares to home.
Simon McConnell, The Delta Riggs
Our gigs have an air of danger and sex. Beautiful women are free to express themselves and are as dangerous as hell. Everybody can have a good time ’cos there’s a lot of love in the room and we just can’t help but stomp out that primeval swamp boogie ooze.
Chris Russell’s Chicken Walk