The Ukrainian Progressive Groove Metal wrecking machine known as JINJER caused a huge stir with the announcement of their Australian tour that due to popular demand 2 new shows have been added to the run! Adelaide at the Lion Arts Factory (Licensed AA) on Tuesday 3rd March and Canberra on Wednesday 4th March at The Basement! Adelaide and Canberra join the already announced Melbourne, Sydney and Brisbane. Their new album Macro dropped Friday, 25th October. 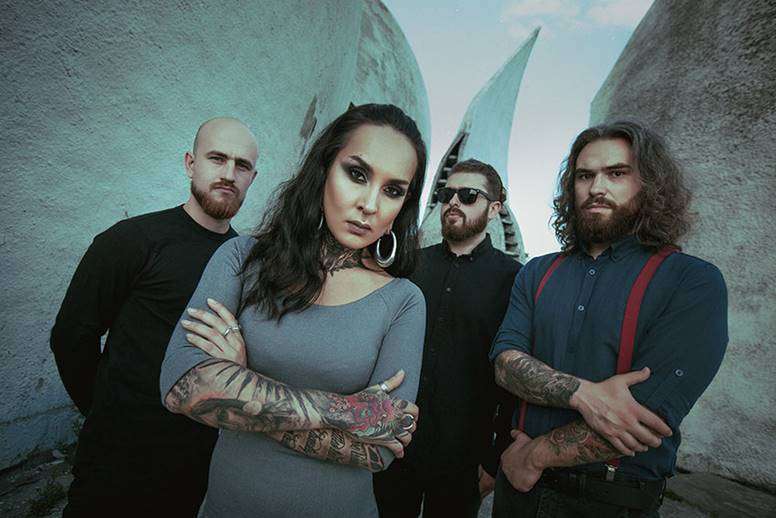 In less than 10 years, JINJER have carved their very own place in the Heavy Metal landscape and are poised to go even further in 2019 and beyond.

Hailing from Donetsk, this Ukrainian musical phenomenon formed in 2009 but consider the official start of the band with the addition of the incredible vocalist and femme fatale Tatiana Shmailyuk in 2010. The band laboured intensively and honed their sound in practice rooms and local stages relentlessly, culminating in their now cult, first album release Inhale, Don’t Breathe in 2012. The following year JINJER were nominated and won Best Ukrainian Metal Band. They would be awarded this prize again a few years later.

While most bands from a country not exactly known for its Heavy Metal exports would be content to enjoy the little recognition received in those first few years, it was clear that JINJER craved more and were willing to go the extra mile to make this happen. It was this attitude and clear vision that pushed the band to quickly write and release their second album Cloud Factory (2014), and venture into the international touring market for the first time, booking their own shows and building their reputation face to face, fan to fan and more importantly under their own terms.

It was this intensity that caught the attention of Napalm Records, who quickly signed JINJER leading to the release of their critically acclaimed third album King Of Everything (2016). As well as the release of their game-changing single and video for “Pisces”, which gained the band new fans, over 20 million of views/streams and countless reaction videos on YouTube. King Of Everything showcased the musical prowess and growth of the entire band while opening the floodgates to a bigger international touring circuit, which JINJER gladly took advantage of. By the end of nearly two years of non-stop touring in Europe, JINJER added new territories such as Israel, Philippines, United Arab Emirates, United Kingdom, America, Canada and most of Latin America, while sharing the festival stages and touring with the likes of Arch Enemy, Cradle of Filth and DevilDriver, to mention a few.

Somewhere between touring vans, roadside pit stops, backstage rooms, soundchecks, hotel rooms, visa applications and flights to tour destinations, JINJER buried themselves in the rehearsal room once again to compose 5 brand new tracks for what would become the Micro EP – written not only for the fans but for themselves, as they needed something new to keep their sanity on the road.

Released on the 11th of January 2019 and coinciding with the start of their European Tour together with Soilwork and Amorphis, the Micro EP was received with open arms from fans and critics alike. Songs “Ape” and “Perennial” became instant favourites, climbing to the top of many industry charts and radio station lists worldwide. And once again showcased the musical depth and phenomenal songwriting talent of the band, as well as Tatiana’s amazing vocal range.

Get ready for March 2020… with their new album Macro on the airwaves, Australia is set to be blown away by JINJER – face-meltingly impressive live… Don’t miss your chance to see some of Metal’s absolute finest. 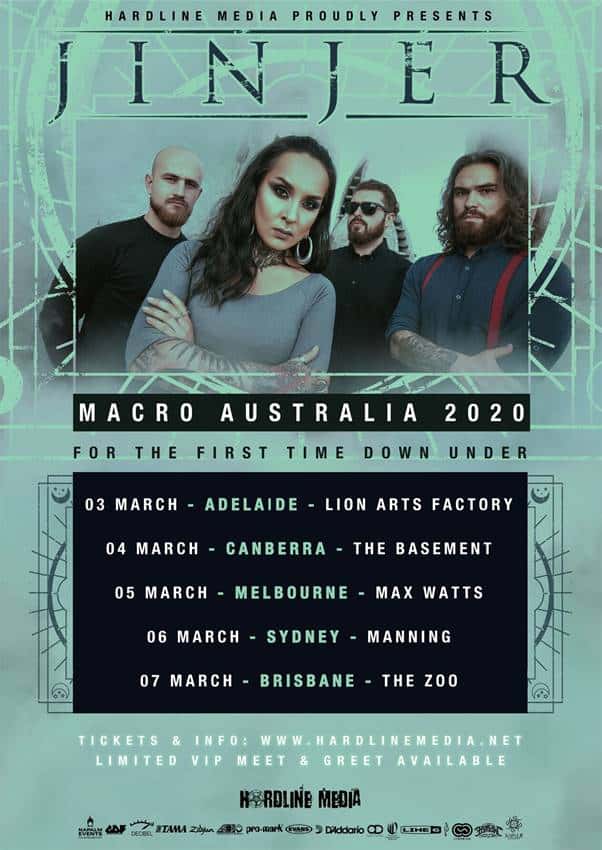 VIP MEET AND GREET EXPERIENCE available ONLY through www.hardlinemedia.net

THE EXPLOITED PUNKS NOT DEAD… EVER!!   And neither is Wattie!   He may have had a heart attack in December but Wattie and The Exploited made a promise to Aussie and Kiwi fans, and they intend to deliver! […]

ENSIFERUM Path To Glory 2019 Australian Tour You can’t talk about the true greats of folk-inspired melodic death metal without reverent mention of ENSIFERUM, and with their recent album Two Paths they once more affirm their place in the pantheons of […]

Despite the horrible news that Testament frontman Chuck Billy, his wife Tiffany and some crew tested positive to COVID-19 things are now looking up for them!   To keep the good news rolling, the […]

Tegan Voltaire, The Voltaire Twins
Wherever there is music is where I feel most at home
Toby Robinson
Beer, riffs, good people, good food and new adventures, anywhere those things exist, that’s my scene!
Andy, Don Fernando
Right now it’s a room with no lights on. An unmade bed. A laptop with 9% battery and a mosquito that just refuses to die.
Dave Larkin, Dallas Crane
Going to the river on sunny afternoons with the blow up dingys and resting your beers on lily pads.
The Frowning Clouds
When I’m not working in the studio or doing shows I’m at home with my partner and our baby so I guess they are my scene.
Way of the Eagle
I’m in with the Out-Crowd
Dave Warner
World/folk. Acoustic and proud of it!
Ilana Cravitz, The London Klezmer Quartet
The TV show “Full House
World Wild
If you’re a Max Chillington then you’re our scene.
Gunslingers
Currently its the Yarra River Trail I’m walking along. Generally my scene would be Melbourne. Nothing feels or compares to home.
Simon McConnell, The Delta Riggs
Our scene is this big gorgeous wide world we live in all its majestic splendour!
Kim Salmon, The Darling Downs
Sitting in the sun, in a nice chair, with a good book.
James Reyne
Fuck the Fucking Scene question! xo
Fuck The Fitzroy Doom Scene
Local bands at sticky carpet venues. Vinyl. Social networking. Keeping healthy in order to play full throttle live sets. Loud rehearsals. Good people with creative ideas. PRIMITIVE ROCK.
Jon S Williams of City of Cool
Flanelette pyjama pants.
Timberwolf
Leadfinger is a very strange band, hard to define, but we are free.
Stew, Leadfinger
Ep. 1 Series 3 of BBC’s ’Sherlock’ where Sherlock bungee jumps through a window and kisses Molly Hooper.
Miss Adelaide Everheart from Early Burley Burlesque
Aside from music and everything creative, I love open-mind people, unexpected humour, seeing the world and nature, riding my bicycle, playing billiards. I’m also a fan of coffee, whiskey and most things vintage.
Jessica Stuart Few
My scene is finding any excuse to dance with my 2 year old daughter Ruby.
Matthew Hardy, Comedian
My scene is a Punk-hardcore scene or an underground, minimal electronic scene, something grungy – where everyone is wearing black. That’s my vibe; don’t go out until 11 when all the other vampires come out and go home when the sun comes up at 7. Oh shit. Creatures of the night.
Greg Puciato, Killer Be Killed & Dillinger Escape Plan
Tunes, mates, and honesty. No dickhead policy!
Buddha In A Chocolate Box
The Astor Theatre on chapel st. Old cinema with copious amounts of atmosphere playing classic films (Chaplin, Gene Kelly, Kubrick, etc) and me with a honeycomb choc top spilt on my Tshirt because that’s just how I roll.
Jude Perl, Comedian
Any scene with Al Swearangen & Mr. Wu from the show Deadwood ;)
Mathas
It’s beards.
Nathaniel Beard, The Beards
It’s Thonbury. It’s my dreaming. I’ve lived here 30 years and it’s evolved with me. The more I drink wine, the more wine bars appear in the neighbourhood. The more I eat, the more cafes appear in the neighbourhood. Fantastic.
Denise Scott, Comedian
Our gigs have an air of danger and sex. Beautiful women are free to express themselves and are as dangerous as hell. Everybody can have a good time ’cos there’s a lot of love in the room and we just can’t help but stomp out that primeval swamp boogie ooze.
Chris Russell’s Chicken Walk
Country roots, old time, bluegrass, folk, Americana scene Traditional plus :)
Whitetop Mountaineers
Art is my scene. No labels, restrictions or judgement. I love art in all it’s varied glory.
The Last 5 Queers