“This isn’t a rock concert. We’re in this together.

We are a fuckin’ family, and this is Heavy Metal Psychotherapy 101!” – Chad Gray HELLYEAH

Brace yourself for full on METAL assault when HELLYEAH return to our shores after long 5 years for a headline tour of Australia & NZ this coming August! – This will be their first tour of NZ since 2007 too!!

HELLYEAH is a Supergroup that lives up to the title. Featuring ex-Mudvayne singer Chad Gray, ex-Pantera drummer Vinnie Paul,  ex-Nothingface guitarist Tom Maxwell, bassist Kyle Sanders (ex-Bloodsimple and brother of Mastodon bassist Troy Sanders) and Christian Brady (ex-Überschall) guitar. HELLYEAH are in a league of their own with their own. Their distinct sound and stage presence is best described as pure metallic fury and the envy of fans and other musicians all over the world.  This is a musician’s band and they are finally getting the recognition they deserve!

“HELLYEAH’s live performance was everything anyone could have asked for and then some.” – Cryptic Rock

“This is now an in-your-face, metal eruption.”  – On Stage Review

After eight years, three albums, countless tours as headliners, festival favourites and as Special Guests to A7X, Volbeat, Five Finger Death Punch and more, HELLYEAH have gone for the jugular with their latest album Blood For Blood. Every song on the album is a belter and doesn’t give the listener an inch. And the bands live shows have been more intense than ever! With the recent addition of Saunders and Brady, the guys have a new found energy that feeds the crowd relentlessly and sees them going nuts and moshing from the front row to the back every single night. HELLYEAH Live in 2015 delivers the best of both worlds. Fans are clamouring for this tour all over the world!

“Blood for Blood’ seems like an album tailor made for the stage, & HELLYEAH now have the lineup to pull it off. Trust us when we say that this is definitely an album you’ll want to see the band play as much as possible in their live sets.” – Loudwire

HELLYEAH fans are huge in number and these shows are going to be packed. Expect back-breaking mosh pits, throat destroying scream-alongs and a sense of weight being lifted from your shoulders. This band is full-on dedicated to ensuring their shows are as much about the fans as about the band so these shows will be something special!

“HELLYEAH’s live show is not one to be missed as its intensity was something you could feel.” – Ultra 5280

“HELLYEAH came out strong, truly coinciding with the characteristics of their new album. The conflagration-like screams of vocalist veteran Chad Gray were so fierce, they could have been incendiary” – Rock Roll Mag 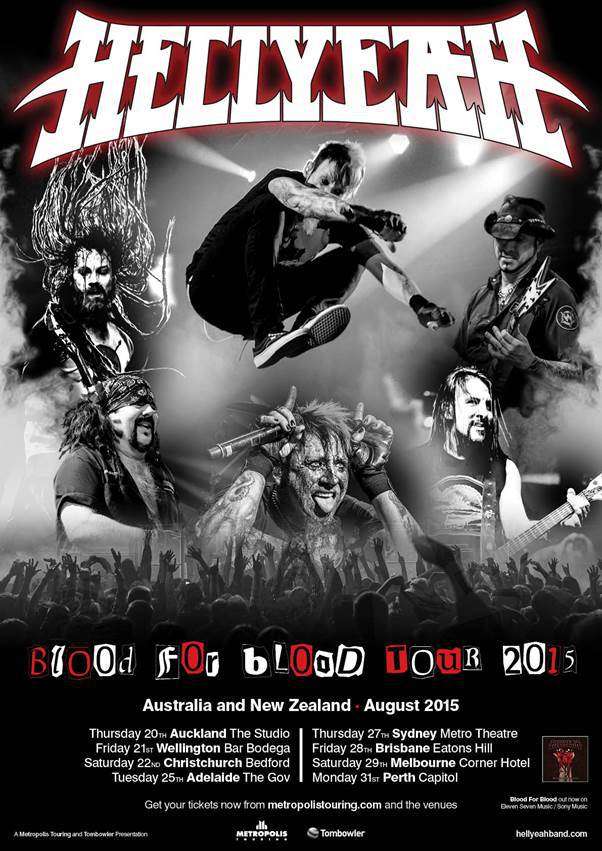 Tickets are only $59 + booking fee and available from http://www.metropolistouring.com/tour.php?tour=2015-hellyeah

Touring their new album Blood For Blood, Hellyeah raised hell at their sold-out Melbourne gig. The Corner Hotel held wall-to-wall metal heads, the likes of which had never been seen before. The number of punters […]

Tegan Voltaire, The Voltaire Twins
All the wandering. The bastards and the angels. The sound of the rain and the pains of the heart. The silence. All the houses and all the rooms. All the keys and phones.
Raised By Eagles
We can be dirty, we can be imperfect, we can be classy, it doesn’t matter. We drift between scenes and eventually may just create our own.
The Ugly Kings
All of the above and more in my shed every Friday night
Hound
Staying home out of harms way.
Peter Milley, Cairo Club Orchestra
I don’t wish to belong to any scene that would have me as a member (with thanks to Groucho Marx).
Bob Spencer, Raw Brit
Well I’m still looking for my scene, and I think I might have found it. Between the pages of What’s My Scene Magazine.
Dave Faulkner, Hoodoo Gurus
Obviously to create music. My family. I love driving my Ferraris.
Yngwie Malmsteen
Tunes, mates, and honesty. No dickhead policy!
Buddha In A Chocolate Box
Bed. Pringles. Whisky. Attenborough doco. Wham.
Marlon Williams
All the kids who weren’t cool at school and still aren’t. Those people who didn’t manage to become awesome artists and uber hip performers. The raggy dolls who never found a way to make their raggy doll-ness work for them.
Jonathon Duffy
Quirky cabaret bars that serve a mean G&T and boast a stellar cocktail list..which is why you’ll always find me returning to The Butterfly Club! I also love the buzz of a Fringe or Cabaret Festival, or a smart Opening Night. Any excuse for a dress up, really!
Amelia Ryan, Lady Liberty
Ep. 1 Series 3 of BBC’s ’Sherlock’ where Sherlock bungee jumps through a window and kisses Molly Hooper.
Miss Adelaide Everheart from Early Burley Burlesque
Experimental electronica, musical metacreation, multiplicitous media, hacking.
Ollie Brown
Going to the river on sunny afternoons with the blow up dingys and resting your beers on lily pads.
The Frowning Clouds
Our scene is folk that are interested in change. Not just music, but breaking the norm, the boundaries and stereotype of Australian ’rock/pop’ music. Unpredictable, the question marks, the new jokers in town. Don’t Believe The Haze.
Slumberhaze
Yass KFC
Simon, Loon Lake
I like to think that I belong to the head-strong Independent Music Scene – where we – musos and audience and everyone in between – all make gigs/tours, recordings, releases happen for ourselves and work our arses off to keep it going for the rest of our lives – all for the love of Music!
Florelie Escano
Country roots, old time, bluegrass, folk, Americana scene Traditional plus :)
Whitetop Mountaineers
I like the beach more than anything. The beach feels like home all year round. In terms of a scene…I actually prefer to hermit most of the time.
Abbe May
Any scene with Al Swearangen & Mr. Wu from the show Deadwood ;)
Mathas