A staggering 30 years after their inaugural live concert at the Vulcan Hotel in Ultimo, Sydney, the Hard-ons have delivered to the world a mesmerising document of their current incarnation. Witness: PEEL ME LIKE A EGG.

An unusual Hard-ons album to be sure, PEEL ME LIKE A EGG is a concise (13 tracks, 30 minutes) explosion of mega-rock riffage (“Burning up on Re-entry”), epic black metal (“Ain’t got no guardian angel”), moody and lush pop (“Close to the ground”), new-wave pop (Clumsy little oaf I am”) and (perhaps the Hard-ons’ most famous trait) volatile and catchy power-pop (“Shadow Shelf”).

PEEL ME LIKE A EGG is the Hard-ons’ first album with current drummer Murray Ruse. Incredibly it also features original drummer/vocalist Keish de Silva on backing vocals. Together they contribute in turn propulsive, unhinged and exciting rhythm and lush melodic elements. Paradoxically, PEEL ME LIKE A EGG is the Hard-ons’ most adventurous yet accessible album to date – precisely because of the serious lack of fluff. Every note, every roll, and every crackle is made accountable on this album, and every contribution is completely unwasted, no doubt due to the ridiculously experienced nature of Blackie’s monolithic song-writing and the band’s musicianship, as well as the explosive and dynamic production from award-winning producer Chris Townend (Silverchair, Portishead) with whom the boys have had a relationship that spans over two decades. 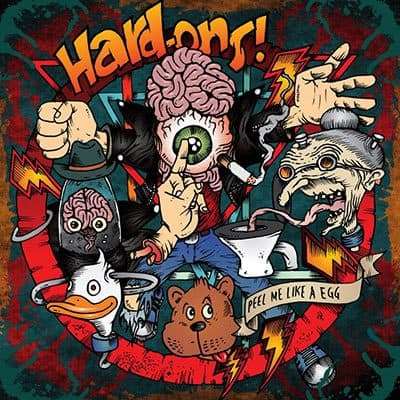 The 30 minutes of power-punching is housed in a glorious and surreal sleeve designed by the artist-in-residence, bassist Ray Ahn. PEEL ME LIKE A EGG is a diamond hard documentation of perhaps the most unusual and long lasting underground rock career in Australia. Show-casing bare-chested glory AND clear, concise studio concepts, PEEL ME LIKE A EGG is yet another essential check-point in an utterly unique and superb talent that is the Hard-ons.

Now, even BETTER news. Back from an incredible sojourn of Buenos Aires where the band played to over 800 fans over two shows, the Hard-ons are launching the above-mentioned album over two glorious nights. Show-cased will be tunes from their entire career with highlights sure to be tracks from the brain-melting “PEEL ME LIKE A EGG” opus!

Scene News: THE HARD-ONS Usher In A New Phase – Keish Permanently Returns To The Fold As Frontman

When I’m not working in the studio or doing shows I’m at home with my partner and our baby so I guess they are my scene.
Way of the Eagle
I will continue the continuum, singing my Songline.
Kutcha Edwards

Well I’m still looking for my scene, and I think I might have found it. Between the pages of What’s My Scene Magazine.
Dave Faulkner, Hoodoo Gurus
Yass KFC
Simon, Loon Lake

Currently its the Yarra River Trail I’m walking along. Generally my scene would be Melbourne. Nothing feels or compares to home.
Simon McConnell, The Delta Riggs
Well these days my scene tends to revolve around my computer and being nudged by my dog to take her out for a walk. And then having my wife shout at me for spending time on my computer. I’m loving it actually. I’m quite relishing that scene. I miss them both very much.
Peter Hook, Joy Division/New Order/The Light

I like to think that I belong to the head-strong Independent Music Scene – where we – musos and audience and everyone in between – all make gigs/tours, recordings, releases happen for ourselves and work our arses off to keep it going for the rest of our lives – all for the love of Music!
Florelie Escano
Anywhere there is good company, great conversation, and a glass of red.
Helen Perris

I love being on a little boat near home in South West Victoria with a fishing line in the water, the Sun coming up or going down. I also love walking the streets of Melbourne or Manhattan or many of the beautiful towns and villages of Ireland or anywhere. My partner and my family are central to it all. I also love being in the midst of a great music session, anywhere, anytime, being transported into the soul of the Universe.
Shane Howard
It’s beards.
Nathaniel Beard, The Beards

Leadfinger is a very strange band, hard to define, but we are free.
Stew, Leadfinger
Act III, Scene VI of King Lear. A tense and gripping scene wherein the ageing king informs his three daughters that they have all been accepted as contestants on Family Feud.
Ben Pobjie, comedian
All the kids who weren’t cool at school and still aren’t. Those people who didn’t manage to become awesome artists and uber hip performers. The raggy dolls who never found a way to make their raggy doll-ness work for them.
Jonathon Duffy

Right now it’s a room with no lights on. An unmade bed. A laptop with 9% battery and a mosquito that just refuses to die.
Dave Larkin, Dallas Crane
My bedroom
Nantes

I’m in with the Out-Crowd
Dave Warner
My scene is finding any excuse to dance with my 2 year old daughter Ruby.
Matthew Hardy, Comedian