As the anticipation arises and the count down begins, Australia’s Good Things Festival is thrilled to announce the addition of local support acts added to the incredibly huge line up, reveal the timetables for the event and the launch of the Good Things Festival app for you to start preparing your day.

Hailing from Melbourne, Stuck Out are the local support act for the Melbourne leg of the festival. After putting in the hard work over the past two years supporting bands such as Real Friends and The Getaway Plan, the five-piece have released their new EP, You Won’t Come Home and a clear vision for the future.

Sydney’s Good Things Festival will be joined by Redhook, the Screaming rap rock electro pop mutants from Sydney fighting against the forces of darkness inside our own heads & doing to genre barriers what Godzilla did to Tokyo. Their latest single, Turn Up The Stereotype has already received airplay on triple j & Unearthed.

Australia’s exciting pop punk group, Stateside will join the Brisbane line up. Over the past year the group have been supporting international acts such as Simple Plan, The Wonder Years, Knuckle Puck, As It Is and were one of the most talked about bands at Bigsound 2018. Their second EP, Naïve released in 2017 tackles topics such as toxic relationships and emotional turmoil.

It’s time to put you out of your misery and reveal the playing times for Melbourne, Sydney & Brisbane. All playing times are below and can be found on the Good Things Festival app which is now available to download on your mobile device. The features include playing times, maps, artist information, notifications and event planner.

Venues and lineup subject to change 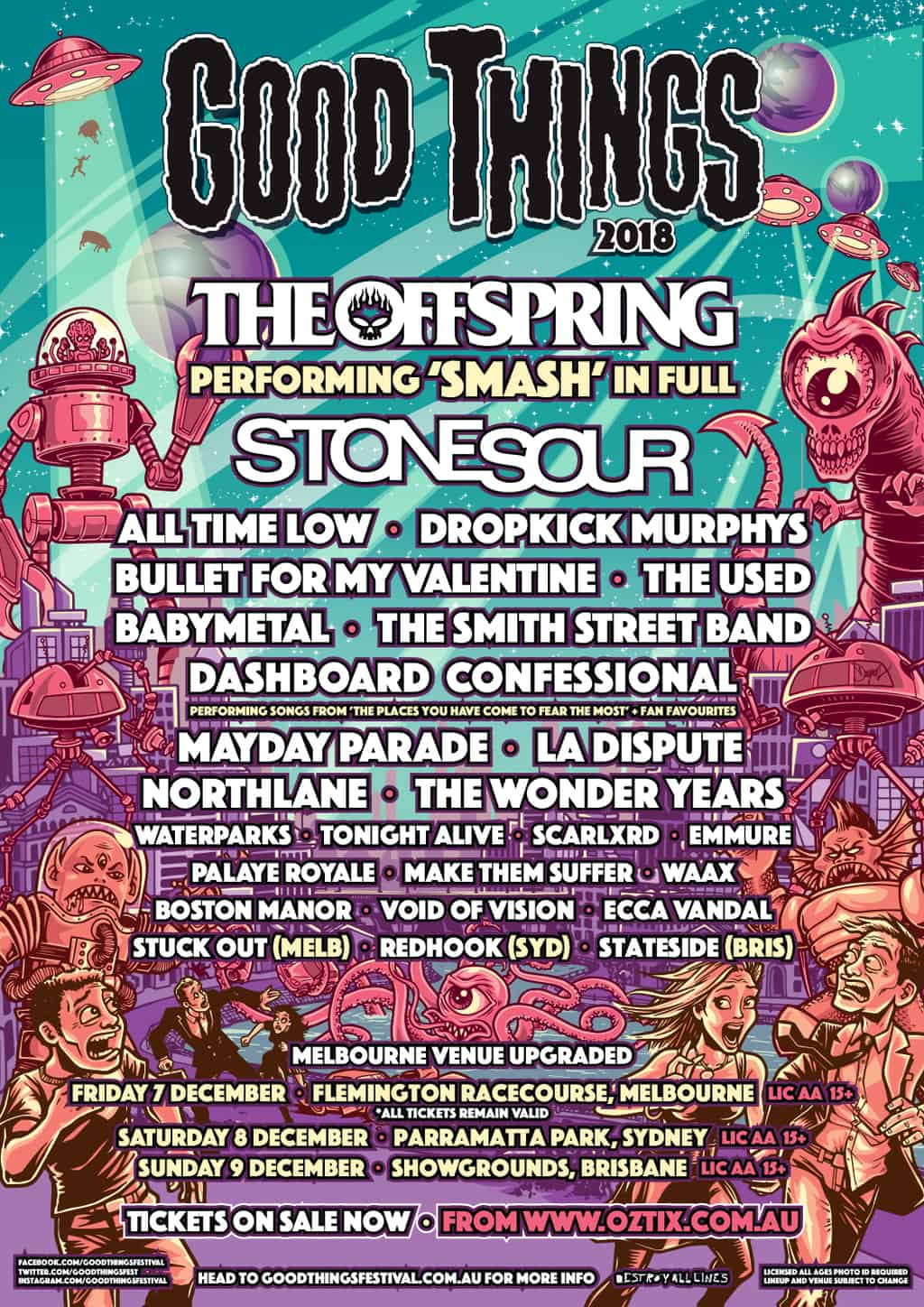 I love being on a little boat near home in South West Victoria with a fishing line in the water, the Sun coming up or going down. I also love walking the streets of Melbourne or Manhattan or many of the beautiful towns and villages of Ireland or anywhere. My partner and my family are central to it all. I also love being in the midst of a great music session, anywhere, anytime, being transported into the soul of the Universe.
Shane Howard
Tunes, mates, and honesty. No dickhead policy!
Buddha In A Chocolate Box
My scene is driving fast cars and shooting guns.
Ace Frehley
Sitting in the sun, in a nice chair, with a good book.
James Reyne

The car wash scene from Cool Hand Luke will do just fine thank you.
Old Gray Mule
World/folk. Acoustic and proud of it!
Ilana Cravitz, The London Klezmer Quartet

Going to the river on sunny afternoons with the blow up dingys and resting your beers on lily pads.
The Frowning Clouds
I will continue the continuum, singing my Songline.
Kutcha Edwards

Right now it’s a room with no lights on. An unmade bed. A laptop with 9% battery and a mosquito that just refuses to die.
Dave Larkin, Dallas Crane
All the kids who weren’t cool at school and still aren’t. Those people who didn’t manage to become awesome artists and uber hip performers. The raggy dolls who never found a way to make their raggy doll-ness work for them.
Jonathon Duffy

Well I’m still looking for my scene, and I think I might have found it. Between the pages of What’s My Scene Magazine.
Dave Faulkner, Hoodoo Gurus
All of the above and more in my shed every Friday night
Hound