GET YA ROCKS OFF by name and by nature, it is just what we want you to do as Silverback Touring presents its first ever club event on Friday 30th August in Melbourne at Globe Alley. After a bumper 18 months, the Silverback team want to bring back the party atmosphere of yesteryear and you’re invited!

The monthly event will provide a platform for local, and interstate, live talent and up for it rock DJ’s playing a bastardised fusion of “every damn era of rock”Best of all, the event will always be free!

Speaking on the event, Silverback Director, Danny Bazzi said, “the time was right for this type of event and, in Melbourne particularly, where there remains a culture and appreciation of live music as well as a vibrant nightlife scene. Bringing the elements of live music and party vibes is something I have always wanted to do and the opportunity to do it in a like-minded venue, is too hard to pass up”.

The debut event will feature Melbourne band ABLAZE, who have been touring solidly in support of their debut album, “No Chaser”, in one of their final shows before heading off on their monster two month long debut European tour. There will also be ticket giveaways to DANKO JONES and BACKYARD BABIES, and CDs from NUCLEAR BLAST and more! 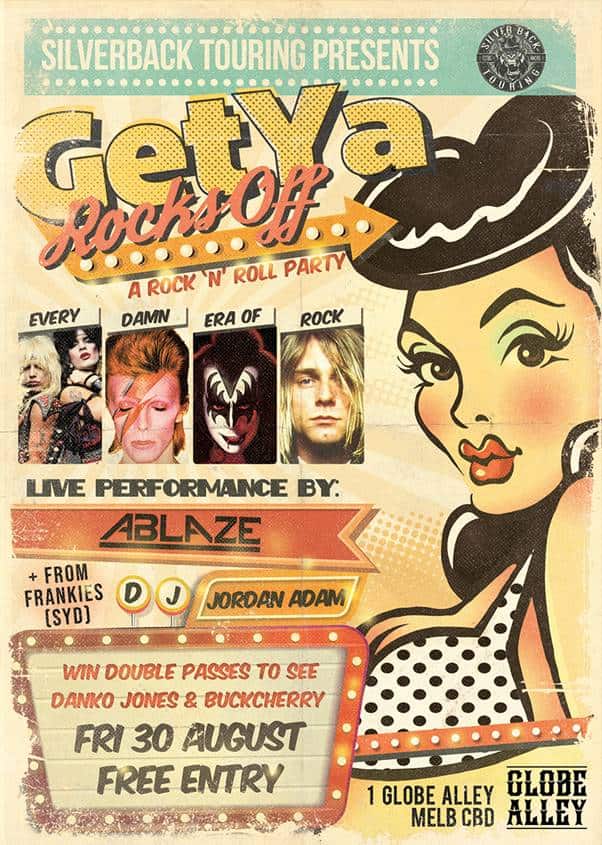 Leadfinger is a very strange band, hard to define, but we are free.
Stew, Leadfinger
Cool small bars with good food, good wine, good company
The Backsliders
Cool venues with good beer on tap that don’t mind us getting loud and getting room grooving so hard you feel the floor shaking.
Papa G and The Starcats

Going to the river on sunny afternoons with the blow up dingys and resting your beers on lily pads.
The Frowning Clouds
I love being on a little boat near home in South West Victoria with a fishing line in the water, the Sun coming up or going down. I also love walking the streets of Melbourne or Manhattan or many of the beautiful towns and villages of Ireland or anywhere. My partner and my family are central to it all. I also love being in the midst of a great music session, anywhere, anytime, being transported into the soul of the Universe.
Shane Howard
Our scene is this big gorgeous wide world we live in all its majestic splendour!
Kim Salmon, The Darling Downs

Well I’m still looking for my scene, and I think I might have found it. Between the pages of What’s My Scene Magazine.
Dave Faulkner, Hoodoo Gurus
Fuck the Fucking Scene question! xo
Fuck The Fitzroy Doom Scene

The car wash scene from Cool Hand Luke will do just fine thank you.
Old Gray Mule
Obviously to create music. My family. I love driving my Ferraris.
Yngwie Malmsteen

Flanelette pyjama pants.
Timberwolf
Act III, Scene VI of King Lear. A tense and gripping scene wherein the ageing king informs his three daughters that they have all been accepted as contestants on Family Feud.
Ben Pobjie, comedian
Melbourne. Nowhere else is as great as Melbourne.
Brat Farrar

I’m in with the Out-Crowd
Dave Warner
Sitting in the sun, in a nice chair, with a good book.
James Reyne

When I’m not working in the studio or doing shows I’m at home with my partner and our baby so I guess they are my scene.
Way of the Eagle