Recently receiving nominations in three The Age Music Victoria Award categories, Freya Josephine Hollick  is unstoppable right now. Songs pour directly from her soul through her guitar – she’s released an album (‘The Unceremonious Junking Of Me’, 2016) and EP (‘Don’t Mess With The Doyenne’, 2017) – in quick succession and now Hollick is releasing a new single, ‘The Pearly Gates Of The Landfill’, on Saturday 11 November.

“I wrote it about – like always – my daughter’s dad, and a date that we had where we went to the tip shop” Hollick reveals of the inspiration behind the lead single from her upcoming album. “And it’s all true, everything that’s in the song – it comes from the hilarious redneck romance that I had with my daughter’s dad.”

When Hollick realised some of her Texan buddies – Robert Ellis, bass player Geoffrey Muller and drummer Michael “Tank” Lisenbe – were in town for Out On The Weekend and assorted sideshows, she was keen for them to join her in the studio and lend their expertise to ‘The Pearly Gates Of The Landfill’. “I’d been listening a lot to Robert’s records, and also to the Traveller tunes,” she explains, “and then when the opportunity arose that they could come into the studio and record, I thought it was perfect ‘cause I’d sort of written the song with their instrumentation in mind anyway, which was kinda cool.”

While recording at Union Street Studio in Brunswick West with guitarist Jacob McGuffie and Roger Bergodaz in the producer’s chair, Hollick and co welcomed some visitors. “Tank had kind of organised it and not told the other guys they’d be coming in to record… and they got there and it was all set up for them to play,” she laughs. “I didn’t realise that they didn’t know and they didn’t mind at all. So we just had a few drinks and we were there until, like, two in the morning just putting the track down. It was really good fun.”

Don’t miss Hollick launching this brand new single with her full band – Daniel Watkins, Jordie Gilmour, Shane Reilly, Kat Mear, Ben Franz and Jacob McGuffie – at The Spotted Mallard on Saturday 11th November where more material from her forthcoming full-length record will be previewed. And be sure to get there early to catch the wonderful Hollie Joyce on support duty.

Freya Josephine Hollick is an Old-Timey, Country, Folk singer/songwriter from the Victorian Goldfields. Hollick has always had her roots in folk music, coming to earlier 20th Century folk, blues and country music through a hunger for knowledge of how and from where modern music evolved. Freya has followed a path back to a time that holds true to her voice, her songwriting and her story. Hollick’s voice has been described as haunting, as both powerful and fragile, it is truly a voice unlike any other, and one that is of another time.

Her latest EP, Don’t Mess With The Doyenne, a move away from the traditionalist sound of The Unceremonious Junking of Me, was recorded over four days at Union Street Studio, Melbourne, produced by Roger Bergodaz (Lost Ragas) and Shane Reilly (Lost Ragas, Tex Perkins), featuring brilliant accompaniment by them both, and Kat Mear on fiddle.

“As a music journalist for nearly 30 years, writing almost exclusively about Australian music, I have heard hundreds of Australian singers and songwriters. Many of them are good, some are very good, but only a few are truly special – and I put Freya Josephine Hollick in that category.”
– Jeff Jenkins (The Music, RRR, ABC, STACK magazine)

“Amongst the local and international guests, she was the outstanding highlight of the show. Freya is a revivalist of folk and country music of times gone by. A mesmerising performer with her unique old style singing and proficient songwriting, she always surrounds herself with the most outstanding local musicians. She is an exceptional talent… Artists like her don’t come along very often.”
– Denise Hylands (RRR)

Freya Josephine Hollick stopped us industry types gasbagging with her Nashville meets Nagambie odes to difficult love. She is a “Vintage Victorian and Old World Songbird” and can even yodel. After Freya’s band ripped through a bunch of well-received, transportive songs she went full Bodyguard and sang I Will Always Love You, hitting that high note in the coda. Standing ovation? You betcha, Kevin Costner. Respect to Dolly Parton.
– Mikey Cahill (Herald Sun) 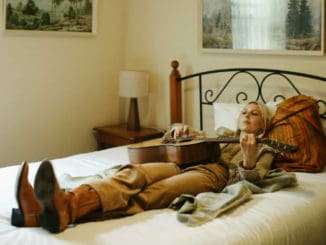