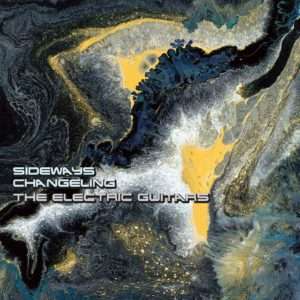 TheElectricGuitars are about to release their second album, ‘Sideways Changeling’ for all flame-brained beatniks, slobbering gutter trash and ecstatic surfers of the cosmos. The album includes 40-odd minutes of Stooges-esque skronk rave-ups, mangled Phil-Spector-via-Jesus-&-Mary-Chain melodies, grandiose Jean-Claude Vannier affectations and epic explorations of nihilism and psychic doom. It was recorded by Paul Maybury in a disused Depression-era 3-D printing facility in Melbourne, Australia, and created by the disused Depression-era brains of TheElectricGuitars.
It will be released on their own (and therefore prestigious) Volume Creep label, as was their first, self-titled, LP in 2015, and the recently released 7” double A-side single “Three Body Problem”/”Death from Beside”. “Three Body Problem” is nearly the opening track on the “Sideways Changeling” LP (preceded only by the short, tense, instrumental title track), but “Death from Beside” is only available on the 7”.
“Death from Beside” has an accompanying video, containing nothing but footage of hot vintage speedway action and one for “Three Body Problem” is about to be revealed. This one was filmed by the band and started out intending to be a scathing commentary on “fake news” and media control, in the style of John Waters but ended up being about something far less tangible, in the style of David Lynch. It might still be about “fake news” and media control, who knows (or can tell)?
The painting that was used on the cover was by our friend and genius Trev Comley, of Adelaide, SA. It’s the same painting all over the album – just messed with and zoomed into and out of. 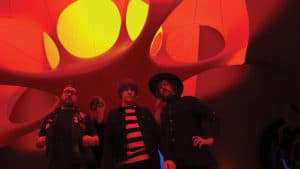 ” … explodes into incandescent action, and so does your head. This is some weird shit, in the very best psychedelic sense” – Patrick Emery, MESS+NOISE (review of ‘TheElectricGuitars’ LP)
TheElectricGuitars release their ‘Sideways Changeling’ album on Monday 19th March and will launch it at Woody’s in Collingwood, Melbourne on Friday 25th May.

Tell us about your new EP ? It’s called “I Know A Place We Can Love” EP and was recorded at the Grove Studios in Somersby NSW with producer Burke Reid (Courtney Barnett, The Drones, DMA’s, […]

SUNNYBOYS RELEASE ‘CAN’T YOU STOP’ THE FIRST NEW SINGLE SINCE 1984 Sunnyboys release Can’t You Stop their first recording of all new music since Comes As No Surprise, their swan song 7” in 1984. Recorded […]

Tell us about your new EP ‘Evergreen’ ? It’s a 4 track 10″ record and download coming out on OddBox records. A very cool indie label local to us. They are 4 songs which we […]

Our scene is this big gorgeous wide world we live in all its majestic splendour!
Kim Salmon, The Darling Downs
I will continue the continuum, singing my Songline.
Kutcha Edwards
That’s a hard one, although I do love anything electronic with an indie-pop feel!
Franki
The car wash scene from Cool Hand Luke will do just fine thank you.
Old Gray Mule
My scene is Brunswick. I love it. It provides me with just about everything I need.
About Charlie Marshall
I don’t wish to belong to any scene that would have me as a member (with thanks to Groucho Marx).
Bob Spencer, Raw Brit
Any scene with Al Swearangen & Mr. Wu from the show Deadwood ;)
Mathas
Act III, Scene VI of King Lear. A tense and gripping scene wherein the ageing king informs his three daughters that they have all been accepted as contestants on Family Feud.
Ben Pobjie, comedian
Local bands at sticky carpet venues. Vinyl. Social networking. Keeping healthy in order to play full throttle live sets. Loud rehearsals. Good people with creative ideas. PRIMITIVE ROCK.
Jon S Williams of City of Cool
What’s my scene? well…
And another thing I’ve been wondering lately
Oh, baby,
Tell me where have you been?
Now the stage is set
Where’s my Juliet, baby?
Is it maybe
My Midsummer Night’s Dream?
What’s my scene?
Clowns
Tunes, mates, and honesty. No dickhead policy!
Buddha In A Chocolate Box
Experimental electronica, musical metacreation, multiplicitous media, hacking.
Ollie Brown
Cool venues with good beer on tap that don’t mind us getting loud and getting room grooving so hard you feel the floor shaking.
Papa G and The Starcats
Leadfinger is a very strange band, hard to define, but we are free.
Stew, Leadfinger
Alice likes the Google. Sime likes taxidermy. It’s a pretty happening scene.
Sweet Jean
I am a simple man. My scene is simple. I like playing metal and spending time with my family.
Waclaw ”Vogg” Kieltyka, Decapitated
I think my style is more just making cameos in everyone else’s scene.
Mojo Juju
I like to think that I belong to the head-strong Independent Music Scene – where we – musos and audience and everyone in between – all make gigs/tours, recordings, releases happen for ourselves and work our arses off to keep it going for the rest of our lives – all for the love of Music!
Florelie Escano
It’s a delirium, really, but I like to live like this.
Hugo Race
Rock’n’Roll
About Heels on Decks
Book clubs, philosophy and extreme black metal
Elsen Price
Country roots, old time, bluegrass, folk, Americana scene Traditional plus :)
Whitetop Mountaineers
No set scene. We have played with a variety of bands from King Parrot to The Datsuns. Offer us a show and give us a try!
Los Hombres Del Diablo
Cool small bars with good food, good wine, good company
The Backsliders
If you’re a Max Chillington then you’re our scene.
Gunslingers
Currently, I’m completely enveloped by writing my book; trying to complete the manuscript for my tome.
Jeff Duff
My bedroom
Nantes
My scene is at the moment Big Wongs General Tsos Chicken as I get sauce on the keys typing to you :-)
Brian Mackey
Hiking a 14K foot mountain in Colorado
Cole Washburn
Going to the river on sunny afternoons with the blow up dingys and resting your beers on lily pads.
The Frowning Clouds
Deep 70s disco, wonky synths, shady lyrics, fairy lights and cheap wine.