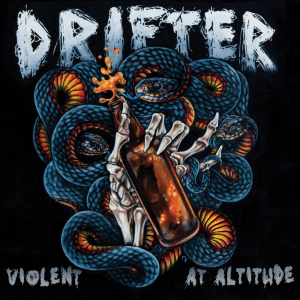 It’s brilliant when you can write about a group of almost newcomers. No one else has used the phrases you want to use, the clichés of yore don’t apply and the sounds themselves are as fresh as newly minted anarchist spawn.

I grabbed at the chance to wax lyrical about Melbourne three-piece Drifter and their first full-length release Violent At Altitude. Can’t we all identify with that one ladies and gentlemen? Stuffed with a shoe horn into cattle class on a discount airline, next to the guy who ate a few garlic pizzas for lunch and who insists on telling you about his digestive issues…We are all capable of feeling a little violent at times, but how many of us have been arrested for conduct unbecoming upon disembarkation? It seems the band are really living the punk life.

There’s something genuine about Drifter’s sound even though they were birthed about 45 years after punk music first ate its way onto the scene. Track one; ‘Violent at Altitude’ combines your typical punchy punk number with contemporary instrumentation and Dan King’s distinctive vocals. ‘Bad’ blasts out with a nifty combination of drums and shredding guitar. The vocals on this track balance very nicely with the instrumentation and this makes it one of the best songs on the album.

‘Prisoner’ has a touch of the Seattle sound about it and ‘Devil Digger’, which is an instrumental piece, lulls us into a false sense of security. Take a listen to Troy Dawson’s bass and Dave Payne’s drums on ‘Drugs’ and you’ll be catapulted into rhapsodies over the dark, deep beats. There’s something to enjoy about every track.

While this isn’t the perfect album, and the sounds are a little rough and disjointed in parts, we can forgive these ‘newborns’ their foibles, especially when we consider the genre is supposed to have street cred and be as raw as newly gotten sunburn. If you’re in Melbourne on the 15th of January, head to the CD launch at The Old Bar and be blown away by the credibility and energy of Drifter live.

Article by Mary Boukouvalas DRIFTER’s singer/guitarist Dan King is “just thankful for being a part of a strong Melbourne and Australian music scene“. King was influenced greatly by seeing bands live. “Bands like Cosmic Psychos, The […]

Currently its the Yarra River Trail I’m walking along. Generally my scene would be Melbourne. Nothing feels or compares to home.
Simon McConnell, The Delta Riggs
I am a simple man. My scene is simple. I like playing metal and spending time with my family.
Waclaw ”Vogg” Kieltyka, Decapitated

Tunes, mates, and honesty. No dickhead policy!
Buddha In A Chocolate Box
I’m in with the Out-Crowd
Dave Warner
I have no idea what my scene is; I have been listening to Dubstep and a bit of Drum N Bass. I found a lot of Hip Hop and RnB stuff is getting very interesting again it is pushing different sounds out. I’ve been really into cycling since the early ‘90s; racing mountain bikes and racing road bikes. So between cycling and music there is not much time left, a bit of sleep now and again.
Mike Edwards, Jesus Jones

When I’m not working in the studio or doing shows I’m at home with my partner and our baby so I guess they are my scene.
Way of the Eagle
No set scene. We have played with a variety of bands from King Parrot to The Datsuns. Offer us a show and give us a try!
Los Hombres Del Diablo

Right now it’s a room with no lights on. An unmade bed. A laptop with 9% battery and a mosquito that just refuses to die.
Dave Larkin, Dallas Crane
My scene is at the moment Big Wongs General Tsos Chicken as I get sauce on the keys typing to you :-)
Brian Mackey

Well I’m still looking for my scene, and I think I might have found it. Between the pages of What’s My Scene Magazine.
Dave Faulkner, Hoodoo Gurus
Obviously to create music. My family. I love driving my Ferraris.
Yngwie Malmsteen

The car wash scene from Cool Hand Luke will do just fine thank you.
Old Gray Mule
Our scene is this big gorgeous wide world we live in all its majestic splendour!
Kim Salmon, The Darling Downs

I love being on a little boat near home in South West Victoria with a fishing line in the water, the Sun coming up or going down. I also love walking the streets of Melbourne or Manhattan or many of the beautiful towns and villages of Ireland or anywhere. My partner and my family are central to it all. I also love being in the midst of a great music session, anywhere, anytime, being transported into the soul of the Universe.
Shane Howard
Going to the river on sunny afternoons with the blow up dingys and resting your beers on lily pads.
The Frowning Clouds
I just do my best to live a life full of the things I love. Rock’n’roll, photography, New York City – they are three things right there that I love a lot!
Paul Miles

Flanelette pyjama pants.
Timberwolf
Our scene is folk that are interested in change. Not just music, but breaking the norm, the boundaries and stereotype of Australian ’rock/pop’ music. Unpredictable, the question marks, the new jokers in town. Don’t Believe The Haze.
Slumberhaze