666 Entertainment presents Doomsday Festival – an annual Australian music festival this September and October in Adelaide (24th Sept), Brisbane (28th Sept), Canberra (29th Sept), Sydney (30th Sept) and Melbourne (1st Oct). [pullquote]The Absolut Metal website aptly described the band as “…doomy as hell, and they groove. If you like Electric Wizard and Sleep, you’ll instantly fall victim to their slow, Sabbath-y tunes. Lori S leads this 3-piece with her eerie, droning vocals and badass riffs.” [/pullquote] Doomsday Festival debuted in 2009 and showcases a selection of Australia’s finest sludge, doom metal, psychedelic, heavy stoner, post-rock and experimental bands. Many distinguished acts have played the touring mini-fest before including internationals – Acid King (USA) in 2010, Cough (USA) in 2011, The Atomic Bitchwax (USA) in 2012, Church of Misery (Japan) in 2013 and Windhand (USA) and Beastwars (NZ) in 2014. Many prime local acts have also been a part of Doomsday Festival over the years, some of which include Pod People, Clagg, Summonus, d’usk, Horsehunter, Space Bong, Los Hombres Del Diablo, Watchtower, The Ruiner, Witchskull and Looking Glass.

Doomsday Festival 2016 is proud to be associated with Melbourne Backline and Fuzz Factory Touring.

Founded and fronted by tough, motorbike riding and guitar slinging Lori S, Acid King have been kicking out the stoner rock and doom metal jams since 1993. The threepiece have released four albums (all produced by the esteemed Billy Anderson), toured with no less than High On Fire, Fu Manchu and The Melvins and played as warm-up acts to Sleep, Hawkwind, Spirit Caravan, The Obsessed and The Mystick Krewe of Clearlight to name a few. [pullquote]SF Weekly recently touted Lori S in their Five Women in Metal That You Need to Know About. “…her fuzzed out guitars and mesmerizing vocal style are hallmarks of the band’s sound.” = SFWeekly.com[/pullquote] In 2015 Acid King released their long awaited fourth full-length album ‘Middle of Nowhere, Centre of Everywhere’ which has been well received by old and new fans alike.

Having toured throughout the US and Europe multiple times and Japan and Australia once, Acid King are now poised to undertake their second Australian tour, as the headline act for the Doomsday Festival 2016 as well as other dates:

Tickets on sale now from all venues. 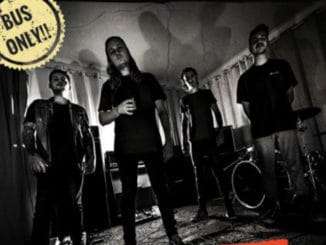