Like a brick wrapped in silk THE KITE MACHINE’s new ‘Sinister Sound’ takes heavy rock riffage and delivers it with such a sweet groove that you’ll gladly take the brain hemorrhage for it.

The verses are gooey and sticky like a kids lolly pop, expertly building up the anticipation to the chorus which pays off in spades. Taking cues from The Black Keys and Queens of the Stoneage the chorus will have you reaching for the gear stick to kick into overdrive. Then just when you thought you’d heard all there was, the solo rips whatever brain cells you have left and takes the song into the stratosphere. Keep a close ear to this one, cause Muse will no doubt be stealing it for their next hit. ‘Sinister Sound’ is equal parts rocktastic, thunderous groove and pop hit and will be on your stereo mixtape for a long time to come.

“Musically, ‘Sinister Sound’ is our attempt at making the stompiest, loudest, fuzz-on-the-peaches pop song we could manage.” – Levi Anderson, The Kite Machine

“Utterly addictive… the whole thing is hardly tame.“ – The Ripe

“The band have developed a nasty habit of making what the people want.” – Music Feeds

Their 2015 EP, ‘LUNATICS‘, had two singles top the Triple J Unearthed overall charts, whilst 2016 single ‘Charlotte‘ has topped over 300k streams on spotify alone, marking the beginning of their astronomical rise on the Aussie music scene. Having previously shared stages with Pierce Brothers, Kingswood and Stonefield the band are no strangers to taking on big stages and big crowds and are excited to head on on the road for their ‘Sinister Sound‘ headline tour. 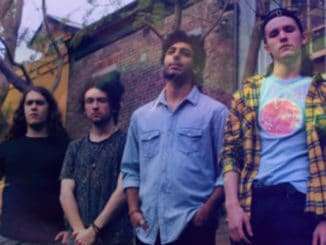 I like to think that I belong to the head-strong Independent Music Scene – where we – musos and audience and everyone in between – all make gigs/tours, recordings, releases happen for ourselves and work our arses off to keep it going for the rest of our lives – all for the love of Music!
Florelie Escano
When I’m not working in the studio or doing shows I’m at home with my partner and our baby so I guess they are my scene.
Way of the Eagle
Alice likes the Google. Sime likes taxidermy. It’s a pretty happening scene.
Sweet Jean

Well I’m still looking for my scene, and I think I might have found it. Between the pages of What’s My Scene Magazine.
Dave Faulkner, Hoodoo Gurus
Hot, hot lovers
Luke Monks, Gay Paris

I’m in with the Out-Crowd
Dave Warner
Melbourne. Nowhere else is as great as Melbourne.
Brat Farrar

I love being on a little boat near home in South West Victoria with a fishing line in the water, the Sun coming up or going down. I also love walking the streets of Melbourne or Manhattan or many of the beautiful towns and villages of Ireland or anywhere. My partner and my family are central to it all. I also love being in the midst of a great music session, anywhere, anytime, being transported into the soul of the Universe.
Shane Howard
All the wandering. The bastards and the angels. The sound of the rain and the pains of the heart. The silence. All the houses and all the rooms. All the keys and phones.
Raised By Eagles

Act III, Scene VI of King Lear. A tense and gripping scene wherein the ageing king informs his three daughters that they have all been accepted as contestants on Family Feud.
Ben Pobjie, comedian
World/folk. Acoustic and proud of it!
Ilana Cravitz, The London Klezmer Quartet

Currently its the Yarra River Trail I’m walking along. Generally my scene would be Melbourne. Nothing feels or compares to home.
Simon McConnell, The Delta Riggs
All the kids who weren’t cool at school and still aren’t. Those people who didn’t manage to become awesome artists and uber hip performers. The raggy dolls who never found a way to make their raggy doll-ness work for them.
Jonathon Duffy

Cool small bars with good food, good wine, good company
The Backsliders
Going to the river on sunny afternoons with the blow up dingys and resting your beers on lily pads.
The Frowning Clouds
It’s a delirium, really, but I like to live like this.
Hugo Race