Diana Radar’s new sound follows a twelve month hiatus and major line-up change. In that time the four piece wrote an albums worth of material between their Carlton share house and Bakehouse Studios in Richmond.

The songs were pre-produced at an aunt’s seldom used beach house in Anglesea before being tracked at Sing Sing Studios Richmond where the engineering and co-production was lead by Lachlan Wooden (Eddy Current Suppression Ring – Primary Colours, Archie Roach – Journey).

The final songs were mastered by Mikey Young (Total Control, Eddy Current Suppression Ring).  The music video was directed by Melbourne music photographer Jay Hynes and was shot back at the band’s Carlton share house, taking the project full circle.

For now, here’s a preview of the clip:

Diana Radar are back playing live and will be touring in 2018. 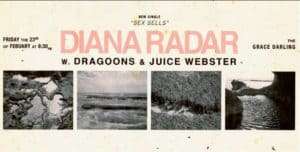 Catch DIANA RADAR at The Grace Darling, Collingwood on February 23 for their first Melbourne show this year.

Scene News: Allah-Las (US) announce their first Australian Tour this May

Act III, Scene VI of King Lear. A tense and gripping scene wherein the ageing king informs his three daughters that they have all been accepted as contestants on Family Feud.
Ben Pobjie, comedian
My scene is at the moment Big Wongs General Tsos Chicken as I get sauce on the keys typing to you :-)
Brian Mackey

Cool small bars with good food, good wine, good company
The Backsliders
My scene is a Punk-hardcore scene or an underground, minimal electronic scene, something grungy – where everyone is wearing black. That’s my vibe; don’t go out until 11 when all the other vampires come out and go home when the sun comes up at 7. Oh shit. Creatures of the night.
Greg Puciato, Killer Be Killed & Dillinger Escape Plan

Right now it’s a room with no lights on. An unmade bed. A laptop with 9% battery and a mosquito that just refuses to die.
Dave Larkin, Dallas Crane
I think my style is more just making cameos in everyone else’s scene.
Mojo Juju

I like to think that I belong to the head-strong Independent Music Scene – where we – musos and audience and everyone in between – all make gigs/tours, recordings, releases happen for ourselves and work our arses off to keep it going for the rest of our lives – all for the love of Music!
Florelie Escano
Currently its the Yarra River Trail I’m walking along. Generally my scene would be Melbourne. Nothing feels or compares to home.
Simon McConnell, The Delta Riggs
Hiking a 14K foot mountain in Colorado
Cole Washburn