DEVIL YOU KNOW, the creative musical endeavour between vocalist Howard Jones (ex-KILLSWITCH ENGAGE), guitarist Francesco Artusato (ALL SHALL PERISH), and drummer John Sankey (DEVOLVED), have proudly partnered up with The You Rock Foundation to premiere the official lyric video created by John Rockovich for the track “As Bright As The Darkness,” which can be viewed on the Nuclear Blast YouTube channel: www.youtube.com/watch?v=9Y24dLz_n3A

“The moment I heard the music for ‘’As Bright As The Darkness,’’ I knew what I was going to write,” states DEVIL YOU KNOW vocalist & lyricist Howard Jones. “This song is about the times I felt at my lowest. I’ve been fighting depression for years and I wish I had not waited so long to get help. Those who know depression, you are not alone. Just reach out.”

The You Rock Foundation aims to serve as a safe haven for those who have suffered from or are currently suffering from depression – the largest perpetrator of suicide, which is the third leading cause of death among young adults aged fifteen to twenty-four. Using music as a backdrop to spread awareness, educate, and empower, the foundation seeks to pull those suffering out of the dark and show them the possibilities of moving forward with a life that thrives. Visit them at www.yourockfoundation.org.

“We are very honoured that we can use our music to join forces with The You Rock Foundation to send such an important and positive message.”

‘’Depression & Anxiety is rampant in the Music industry and awareness needs to be brought to the forefront. A lot of people feel they are alone and we need to let them know that they can get help. They don’t need to suffer anymore.’’ 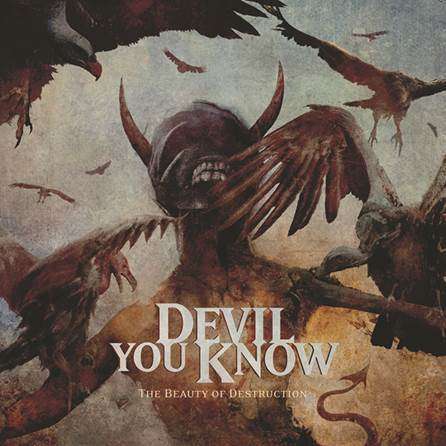 “As Bright As The Darkness” comes off The Beauty Of Destruction debut album by DEVIL YOU KNOW, which was produced by Logan Mader (5 FINGER DEATH PUNCH, GOJIRA), mixed by acclaimed producer/mixer Chris “Zeuss” Harris (HATEBREED, CHELSEA GRIN), and graced with artwork by Travis Smith (OPETH, DEVIN TOWNSEND).  The album was released in 2014 via Nuclear Blast Entertainment.

Purchase The Beauty Of Destruction at: https://itunes.apple.com/au/album/the-beauty-of-destruction/id847569460

More DEVIL YOU KNOW on the Nuclear Blast YouTube channel.

Tell us about your new album “All We Know”… Daniel Friedl (Panzer): “All We Know” is our seventh record and we spent one and a half years working on it. It´s always an intense period of […]

The last few months have been awesome for metalheads, as half of the ‘Big Four’ thrash metal bands have released brand new albums. Not to be outdone, Anthrax’s new album For All Kings is jam […]

Scene News: BLACK STAR RIDERS are back with ‘Another State of Grace’

BLACK STAR RIDERS are back – with a new album, a new line-up, and what frontman Ricky Warwick calls “a new energy and chemistry”. In the seven years since Warwick and legendary guitarist Scott Gorham put BLACK STAR RIDERS together, they have made three of the finest hard […]

Experimental electronica, musical metacreation, multiplicitous media, hacking.
Ollie Brown
Well these days my scene tends to revolve around my computer and being nudged by my dog to take her out for a walk. And then having my wife shout at me for spending time on my computer. I’m loving it actually. I’m quite relishing that scene. I miss them both very much.
Peter Hook, Joy Division/New Order/The Light
Book clubs, philosophy and extreme black metal
Elsen Price
Local bands at sticky carpet venues. Vinyl. Social networking. Keeping healthy in order to play full throttle live sets. Loud rehearsals. Good people with creative ideas. PRIMITIVE ROCK.
Jon S Williams of City of Cool
Deep 70s disco, wonky synths, shady lyrics, fairy lights and cheap wine.