News Ticker
Delsinki Records returns like a Viking from his native homeland Tasmania, and he’s bringing the plunder. Wednesday the 24th June finds Delsinki and his band take over the stage at the Cellar Bar in St Kilda. 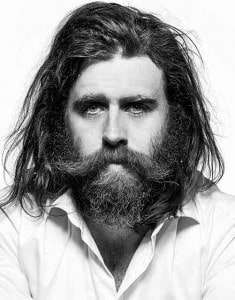 Returning from the voyage across the Strait with him includes the Maouri Chief himself on guitar Dion Hirini (Ross Wilson band), and Jeff Consi (Nuno Bettencourt) beating the skins.
As with previous launches, Delsinki will not be landing empty handed. He will be loaded with copies of his brand new EP A Soldiers Wife. With tracks featuring the moving Steve Pigram, members of the Australian Chamber Orchestra, and globe hopping Coby Grant.
Delsinki will have the five piece band with him, as well as projected clips from four of the videos released over the last three years.  If that were not enough, there are also special guests spots and a body painted rope dancer.
If you stand a chance of survival, get there early, setup your defenses, slap on the war paint, link arms and brace yourselves.​
DELSINKI RECORDS EP LAUNCH – 24th June 2015 – THE CELLAR BAR, ST KILDA.

Tell us about your new album?  Friday 13th of August, 2021 we are releasing our sophomore full length album, ‘Strange, Strange Times’ through Napalm Records. As a cohesive whole, the album feels solidly enmeshed. The […]

Tell us about your new single/ album/ tour? We are heading to Phillip Island to DJ the Burlesque show ‘Burlesque Carnival’ at Hotel, Phillip Island Saturday 23rd May, The night before (morning of) we are DJing […]

Tell us about your new album /tour. I’ve just finished tracking a new album, my first in five years. It’ll be out sometime next year so I thought I’d do an album preview show and give […]

Anyone who welcomes a hairy, gold wearing, hot air blowing idiot to a dinner table is my scene.
Henry Wagons
Country roots, old time, bluegrass, folk, Americana scene Traditional plus :)
Whitetop Mountaineers
Hot, hot lovers
Luke Monks, Gay Paris
All the wandering. The bastards and the angels. The sound of the rain and the pains of the heart. The silence. All the houses and all the rooms. All the keys and phones.
Raised By Eagles
Scones, savory, sweet I don’t mind
The Wooden Sky
Obviously to create music. My family. I love driving my Ferraris.
Yngwie Malmsteen
Tunes, mates, and honesty. No dickhead policy!
Buddha In A Chocolate Box
Beer, riffs, good people, good food and new adventures, anywhere those things exist, that’s my scene!
Andy, Don Fernando
Bed. Pringles. Whisky. Attenborough doco. Wham.
Marlon Williams
The dog park’s pretty good. I have a couple of miniature pinchers. And they’re the loves of my life. I take them for walks to the dog park; I’ve got a Harley Davidson I ride around. It’s not too exciting. It used to be sex, drugs and rock n roll; now I walk my dogs.
Stan Lee, The Dickies
The TV show “Full House
World Wild
Act III, Scene VI of King Lear. A tense and gripping scene wherein the ageing king informs his three daughters that they have all been accepted as contestants on Family Feud.
Ben Pobjie, comedian
I am a simple man. My scene is simple. I like playing metal and spending time with my family.
Waclaw ”Vogg” Kieltyka, Decapitated
All of the above and more in my shed every Friday night
Hound
Any scene with Al Swearangen & Mr. Wu from the show Deadwood ;)
Mathas
Rock’n’Roll
About Heels on Decks
My scene is driving fast cars and shooting guns.
Ace Frehley
I like to be out in the nature, to get away. Go to the woods. My dad lives in the woods. Maybe once or twice a year I don’t have phone reception there is no Wi-Fi
Fredrik Åkesson, Opeth
Experimental electronica, musical metacreation, multiplicitous media, hacking.
Ollie Brown
Melbourne. Nowhere else is as great as Melbourne.
Brat Farrar
I don’t wish to belong to any scene that would have me as a member (with thanks to Groucho Marx).
Bob Spencer, Raw Brit
The beach. Tea with gin at your grandparents house. They have the best stories.
Betty & Oswald
All the kids who weren’t cool at school and still aren’t. Those people who didn’t manage to become awesome artists and uber hip performers. The raggy dolls who never found a way to make their raggy doll-ness work for them.
Jonathon Duffy
Well these days my scene tends to revolve around my computer and being nudged by my dog to take her out for a walk. And then having my wife shout at me for spending time on my computer. I’m loving it actually. I’m quite relishing that scene. I miss them both very much.
Peter Hook, Joy Division/New Order/The Light
I’m in with the Out-Crowd
Dave Warner
Alice likes the Google. Sime likes taxidermy. It’s a pretty happening scene.
Sweet Jean
Local bands at sticky carpet venues. Vinyl. Social networking. Keeping healthy in order to play full throttle live sets. Loud rehearsals. Good people with creative ideas. PRIMITIVE ROCK.
Jon S Williams of City of Cool
World/folk. Acoustic and proud of it!
Ilana Cravitz, The London Klezmer Quartet
That’s a hard one, although I do love anything electronic with an indie-pop feel!
Franki
Staying home out of harms way.
Peter Milley, Cairo Club Orchestra
When I’m not working in the studio or doing shows I’m at home with my partner and our baby so I guess they are my scene.
Way of the Eagle
Book clubs, philosophy and extreme black metal
Elsen Price
I just do my best to live a life full of the things I love. Rock’n’roll, photography, New York City – they are three things right there that I love a lot!
Paul Miles
Aside from music and everything creative, I love open-mind people, unexpected humour, seeing the world and nature, riding my bicycle, playing billiards. I’m also a fan of coffee, whiskey and most things vintage.
Jessica Stuart Few
We can be dirty, we can be imperfect, we can be classy, it doesn’t matter. We drift between scenes and eventually may just create our own.
The Ugly Kings
Cool small bars with good food, good wine, good company
The Backsliders
Currently, I’m completely enveloped by writing my book; trying to complete the manuscript for my tome.
Jeff Duff
Fuck the Fucking Scene question! xo
Fuck The Fitzroy Doom Scene
Anywhere there is good company, great conversation, and a glass of red.
Helen Perris
Deep 70s disco, wonky synths, shady lyrics, fairy lights and cheap wine.