It is with infinite pride that Liberation release Dan Sultan (http://dansultan.com/) ’s fourth studio album, Killer – a collection of songs that marks a significant turning point in a lustrous career spanning over a decade. An enthralling live video of album opener‘Drover’ (https://www.youtube.com/watch?v=pFn8cwffARs&feature=youtu.be) has also been revealed and is an exciting indication of what fans can expect when the Killer Album Tour rolls around in September.

Influenced by an innovative pop landscape, Killer takes Sultan’s honest storytelling into uncharted territory and exhibits a sophisticated leap forward in production and instrumentation. Lyrically, Sultan pushes into some of his most personal and political realms yet, though “I don’t consider myself political or preachy” he says. The songs are inward, reflective and painfully honest.

Killer was recorded in Melbourne with long-time friend Jan Skubiszewski. “Having Jan there to push me and hear my ideas was awesome” Sultan says. “We’ve worked together a lot, but never on something as big as this, and I know he’s as proud of it as I am. It was the perfect storm.” Together they introduced synthesizers and drum machines that drive the album’s 11 soulful pop tracks. The sound is embellished with cinematic swirls and layered gospel vocals that heighten emotions.

Premiered this week on Melbourne’s 3RRR, powerful track ‘Drover’ sees Sultan unearth one of the most important acts of deviance in Australia’s history, reflecting on the Wave Hill walk-off protest in 1966. Sultan self-describes ‘Drover’ as a prequel to Paul Kelly’s‘From Little Things Big Things Grow’

Dan Sultan’s recent appearance at Splendour In The Grass saw him hold an audience in the palm of his hand; unafraid to lay it all on the line. On the Killer Album Tour, Sultan will play some of his largest venues to date in both metro and regional cities, this time backed by a full band. Sultan will also be supporting Midnight Oil on two of their anticipated shows in October. “It’s a whole new show. New music, new band, new vibe. I can’t wait for everyone to see it!”

Dan Sultan’s last album Blackbird landed at #4 on the ARIA Albums Chart and took out the award for Best Rock Album at the 2014 ARIAs, as well as a handful of NIMA and AIR awards. It’s since been accredited Gold in Australia.

Killer is out now.

Sultan’s records have showcased one of Australia’s strongest and most essential voices. Killer is its greatest exhibition yet – STACK

Scene News: Support Act to honour Paul Kelly at Music in the House 2016! 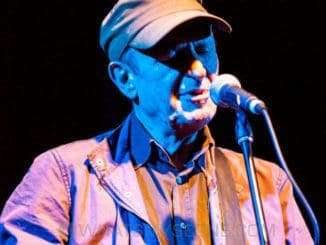