There aren’t many bigger names in metal than SLAYER and Australia is extremely lucky they get to experience one last time and to farewell this legendary band as they hit Download Festival and sideshows in Brisbane and Adelaide with fellow Big Four brothers ANTHRAX and the Polish Hammer of BEHEMOTH.

In 1981 when SLAYER first formed in Huntington Park, CA, bassist/vocalist Tom Araya was 20 years old and worked as a respiratory therapist, guitarist Jeff Hanneman, a rehearsal studio employee at the time, was 17, drummer Dave Lombardo was 16 and delivered pizza, and 17-year old Kerry King was a full-time guitarist.  At that time, there were no blueprints, no set paths, no boundaries or steps to follow; SLAYER’s new hybrid of metal and punk, heavier, faster and darker than the rest, assaulted the world and set a new standard, defining not only a genre, but an attitude.

Fast forward 38-years and SLAYER remains the preeminent punk-thrash-metal band that other heavy acts are measured against and aspire to, and up-and-coming metal heads continue to revere and emulate.  Slayer is a metal juggernaut, with songs that are dark, aggressive and without mercy, mirroring the turmoil and aberrations of our society.

Their membership in “The Big Four” – Metallica, Slayer, Megadeth and Anthrax – the four bands that defined the thrash/metal genre – secures the band’s place in music history.  The five-time nominated, two-time Grammy-winners have also accumulated an abundance of certified Gold Albums along with “Best…” awards from media outlets all over the world, including Kerrang!, SPIN, Metal Hammer, Revolver, and Esquire.  SLAYER even has its own exhibit in the Smithsonian Institute.  Throughout SLAYER‘s history, the band has never faltered in unleashing its extreme and focused sonic assault, and repudiating temptations, SLAYER has chosen to remain crushing and brutal, steadfastly refusing to cater to the mainstream.  Jeff Hanneman passed in 2013, and Exodus guitarist Gary Holt has been filling in for him since.  Paul Bostaph, Slayer’s drummer from 1992 – 1996, then 1997 – 2001, rejoined Araya and King in 2013 and remains behind the kit.

SLAYER looks back on 37 years of mayhem. Episode 2:

In September 2015, Slayer released Repentless, the band’s 12th studio album, the first without Hanneman, first with Holt on guitar, first with producer Terry Date, and first on Nuclear Blast Records, to widespread rave reviews and the highest chart debut of the band’s career.  The band also teamed up with director BJ McDonnell for three high-concept and brutal music videos for the album’s title track, then for “You Against You,” and the most recent, “Pride in Prejudice,” racking up a combined 28+-million views.  Dark Horse Comics published a three-issue comic book series in 2016, based on McDonnell’s original story concept for the videos and written by “Metalocalypse” director Jon Schnepp.

​After a remarkable three-and-a-half decades, SLAYER announced its decision to do one last world tour and then move on.  All Hail SLAYER. 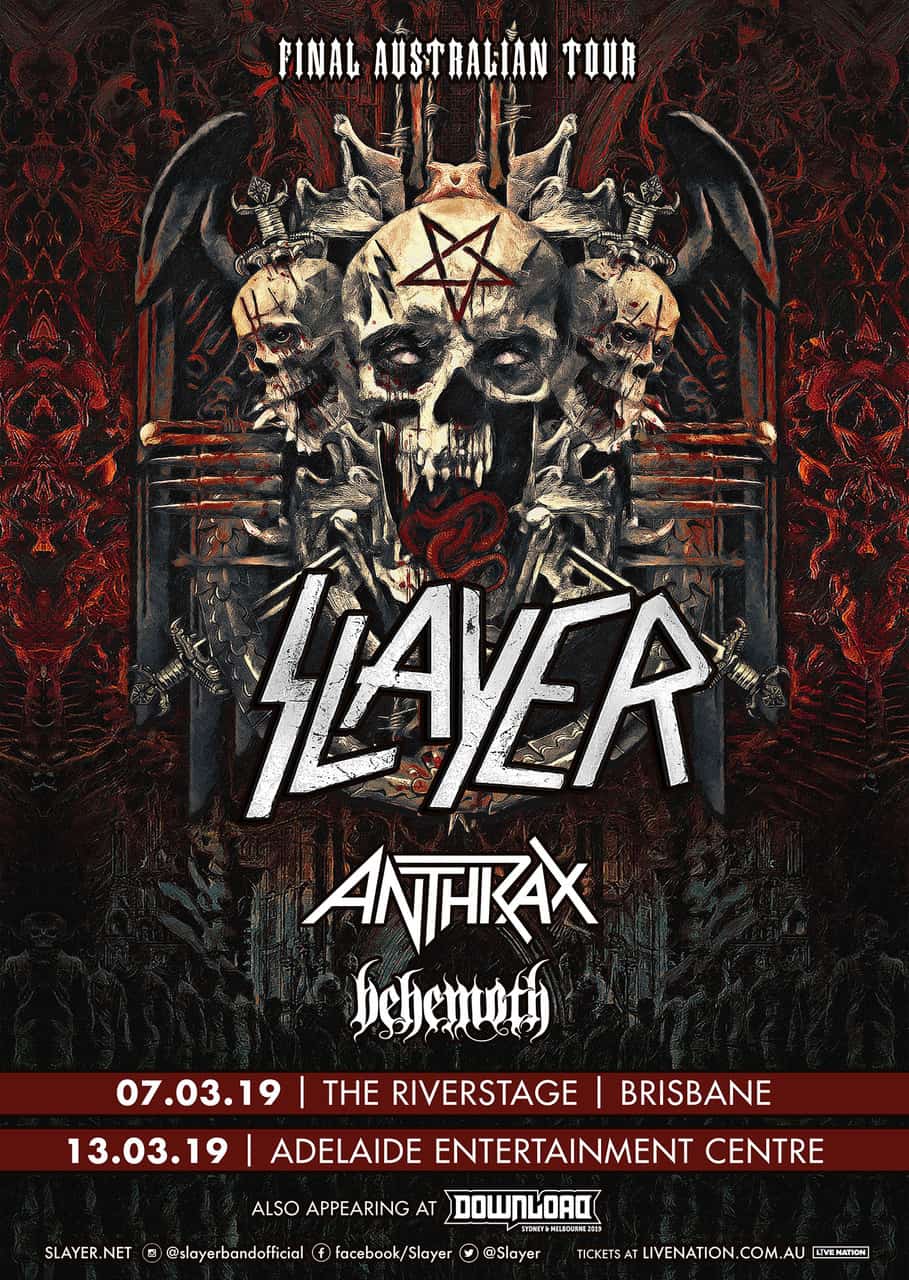 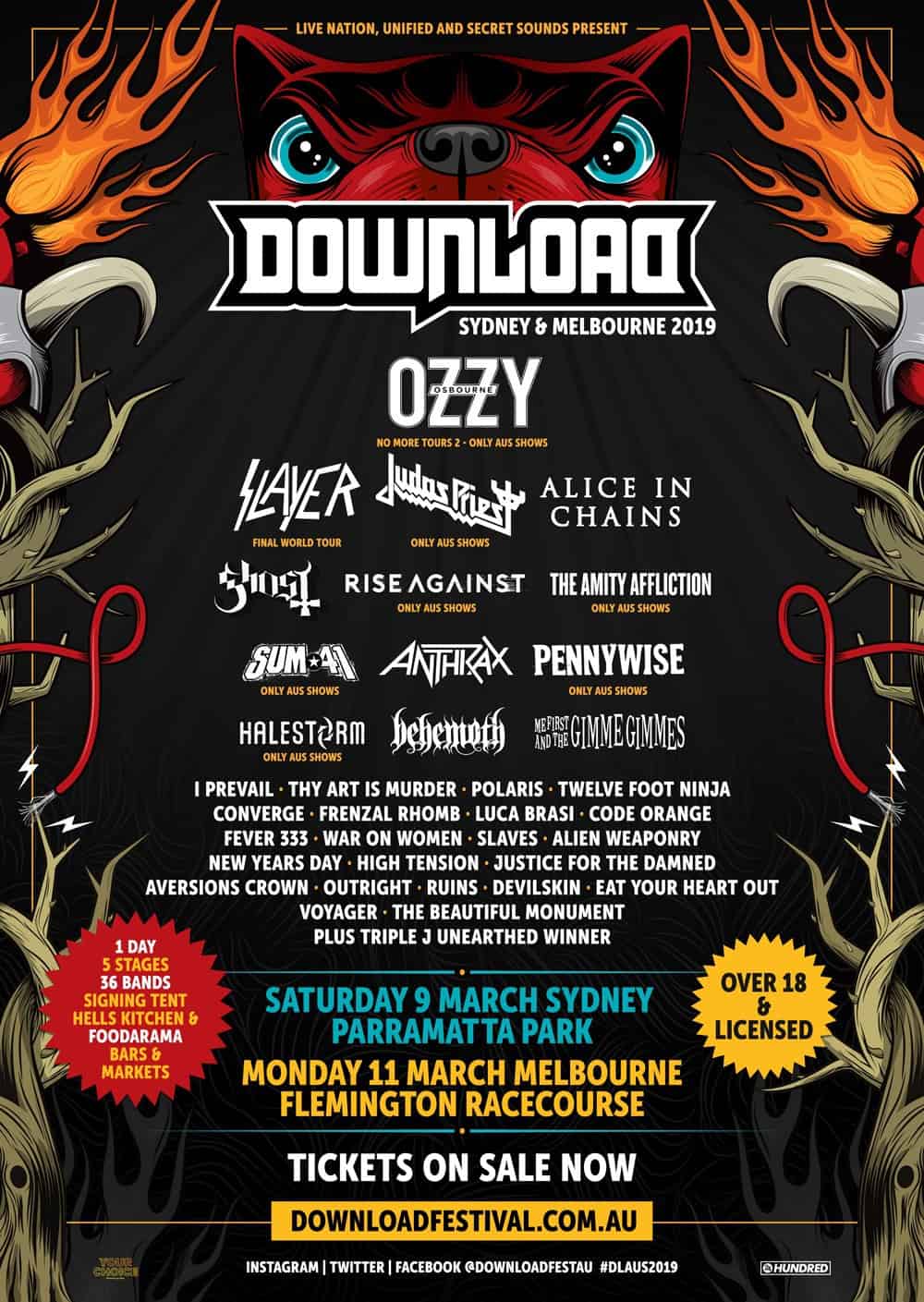 For those of you who enjoy your music heavy with a variation of heavier, gird your loins for the latest release from one of the biggest bands in the thrash metal business, Slayer. Rarely does […]

Download Festival 2018 was the first on Aussie shores and had one date in Melbourne. Organisers expanded the festival for 2019, taking it to Melbourne’s Flemington Racecourse and Sydney’s Parramatta Park in March. […]

Tegan Voltaire, The Voltaire Twins
My scene is Brunswick. I love it. It provides me with just about everything I need.
About Charlie Marshall
Experimental electronica, musical metacreation, multiplicitous media, hacking.
Ollie Brown
All the wandering. The bastards and the angels. The sound of the rain and the pains of the heart. The silence. All the houses and all the rooms. All the keys and phones.
Raised By Eagles
Flanelette pyjama pants.
Timberwolf
What’s my scene? well…
And another thing I’ve been wondering lately
Oh, baby,
Tell me where have you been?
Now the stage is set
Where’s my Juliet, baby?
Is it maybe
My Midsummer Night’s Dream?
What’s my scene?
Clowns
Comedy, surreal show girls, burlesque and theatre
MC KREWD
Art is my scene. No labels, restrictions or judgement. I love art in all it’s varied glory.
The Last 5 Queers
That’s a hard one, although I do love anything electronic with an indie-pop feel!
Franki
Hiking a 14K foot mountain in Colorado
Cole Washburn
The Astor Theatre on chapel st. Old cinema with copious amounts of atmosphere playing classic films (Chaplin, Gene Kelly, Kubrick, etc) and me with a honeycomb choc top spilt on my Tshirt because that’s just how I roll.
Jude Perl, Comedian
I have no idea what my scene is; I have been listening to Dubstep and a bit of Drum N Bass. I found a lot of Hip Hop and RnB stuff is getting very interesting again it is pushing different sounds out. I’ve been really into cycling since the early ‘90s; racing mountain bikes and racing road bikes. So between cycling and music there is not much time left, a bit of sleep now and again.
Mike Edwards, Jesus Jones
Fuck the Fucking Scene question! xo
Fuck The Fitzroy Doom Scene
Cool venues with good beer on tap that don’t mind us getting loud and getting room grooving so hard you feel the floor shaking.
Papa G and The Starcats
All of the above and more in my shed every Friday night
Hound
Ep. 1 Series 3 of BBC’s ’Sherlock’ where Sherlock bungee jumps through a window and kisses Molly Hooper.
Miss Adelaide Everheart from Early Burley Burlesque
If you’re a Max Chillington then you’re our scene.
Gunslingers
The beach. Tea with gin at your grandparents house. They have the best stories.
Betty & Oswald
I’m in with the Out-Crowd
Dave Warner
The dog park’s pretty good. I have a couple of miniature pinchers. And they’re the loves of my life. I take them for walks to the dog park; I’ve got a Harley Davidson I ride around. It’s not too exciting. It used to be sex, drugs and rock n roll; now I walk my dogs.
Stan Lee, The Dickies
Book clubs, philosophy and extreme black metal
Elsen Price
I will continue the continuum, singing my Songline.
Kutcha Edwards
Wherever there is music is where I feel most at home
Toby Robinson
Obviously to create music. My family. I love driving my Ferraris.
Yngwie Malmsteen
Beer, riffs, good people, good food and new adventures, anywhere those things exist, that’s my scene!
Andy, Don Fernando
My scene is at the moment Big Wongs General Tsos Chicken as I get sauce on the keys typing to you :-)
Brian Mackey
Right now it’s a room with no lights on. An unmade bed. A laptop with 9% battery and a mosquito that just refuses to die.
Dave Larkin, Dallas Crane
Any scene with Al Swearangen & Mr. Wu from the show Deadwood ;)
Mathas
Our gigs have an air of danger and sex. Beautiful women are free to express themselves and are as dangerous as hell. Everybody can have a good time ’cos there’s a lot of love in the room and we just can’t help but stomp out that primeval swamp boogie ooze.
Chris Russell’s Chicken Walk
I am a simple man. My scene is simple. I like playing metal and spending time with my family.
Waclaw ”Vogg” Kieltyka, Decapitated
Country roots, old time, bluegrass, folk, Americana scene Traditional plus :)
Whitetop Mountaineers
The TV show “Full House
World Wild
Scones, savory, sweet I don’t mind
The Wooden Sky