Today she releases new single ‘2001’ premiered this week on triple j’s Good Nights. See her take the new single on the road this March with headline dates in Fremantle, Melbourne and Sydney. Ticket links and support details can be found below.

Taking its name from Stanley Kubrick’s film 2001: A Space Odyssey, the track ‘2001’ also references science fiction writer Jack Vance and John Carpenter’s film The Thing (1982). Carla explains the meaning behind the song – “2001 is about escapism through old movies and books that I loved as a kid. Those paired with songwriting serve as the best form of catharsis for me.” 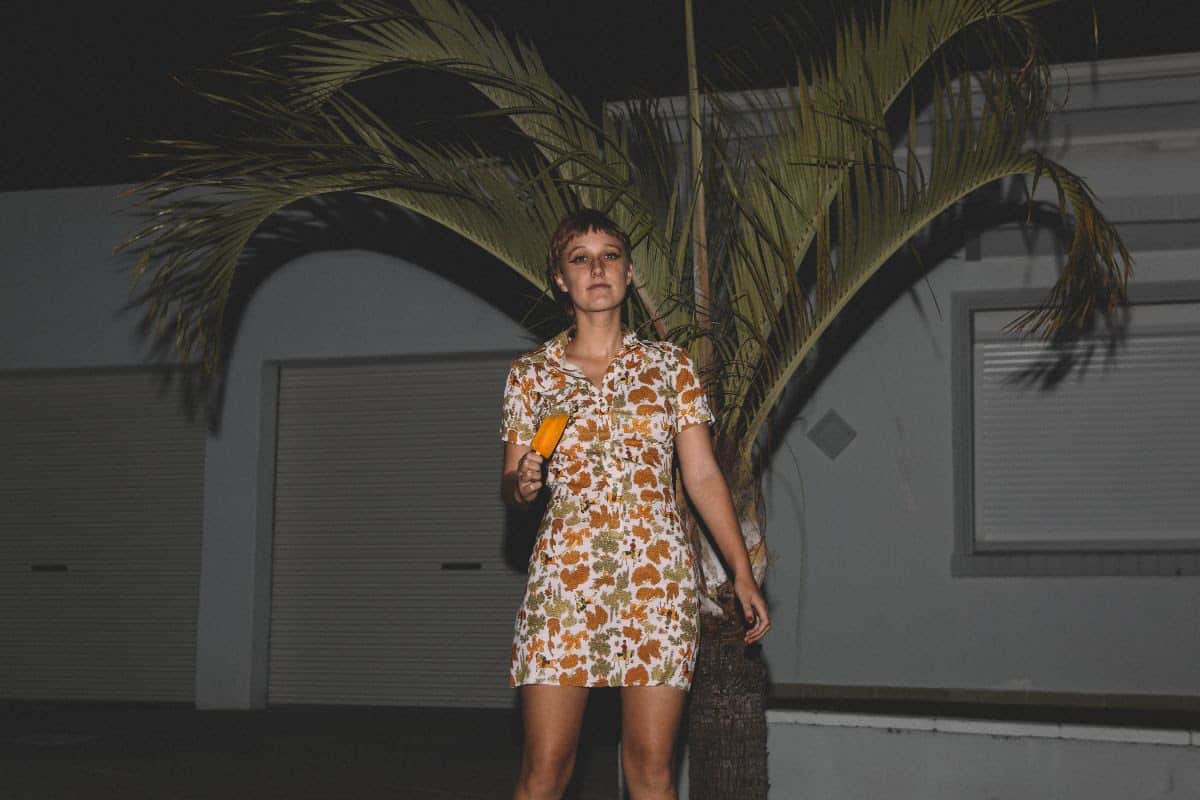 With a captivating live show and relatable lyricism, Carla Geneve burst onto the WA scene in 2017. After being hailed by Pilerats as one of their ’18 Artists to Watch in 2018’, her debut single ‘Greg’s Discount Chemist’ was released to overwhelming support including love from triple j, triple j Unearthed and community radio. The single was the #1 most played track in 2018 for Perth community radio station RTRFM.

After releasing her second single ‘Listening’ and garnering praise for her showcases at BIGSOUND, the end of 2018 saw Geneve lead with seven nominations at the 2018 WAM Awards where she won Best Single for ‘Greg’s Discount Chemist’ and Best Rock Act.

Named one of The West Australian’s Six Brightest Young Stars of 2019 (https://thewest.com.au/news/wa/rising-stars-light-up-our-future-ng-b881067673z) , this year will see the release of her debut EP, solidifying Carla Geneve as one of Australia’s most exciting up and coming talents.

Right now it’s a room with no lights on. An unmade bed. A laptop with 9% battery and a mosquito that just refuses to die.
Dave Larkin, Dallas Crane
I like to think that I belong to the head-strong Independent Music Scene – where we – musos and audience and everyone in between – all make gigs/tours, recordings, releases happen for ourselves and work our arses off to keep it going for the rest of our lives – all for the love of Music!
Florelie Escano
Tunes, mates, and honesty. No dickhead policy!
Buddha In A Chocolate Box
The car wash scene from Cool Hand Luke will do just fine thank you.
Old Gray Mule
Cool venues with good beer on tap that don’t mind us getting loud and getting room grooving so hard you feel the floor shaking.
Papa G and The Starcats

I love being on a little boat near home in South West Victoria with a fishing line in the water, the Sun coming up or going down. I also love walking the streets of Melbourne or Manhattan or many of the beautiful towns and villages of Ireland or anywhere. My partner and my family are central to it all. I also love being in the midst of a great music session, anywhere, anytime, being transported into the soul of the Universe.
Shane Howard
Going to the river on sunny afternoons with the blow up dingys and resting your beers on lily pads.
The Frowning Clouds
If you’re a Max Chillington then you’re our scene.
Gunslingers

Cool small bars with good food, good wine, good company
The Backsliders
I don’t wish to belong to any scene that would have me as a member (with thanks to Groucho Marx).
Bob Spencer, Raw Brit

Currently its the Yarra River Trail I’m walking along. Generally my scene would be Melbourne. Nothing feels or compares to home.
Simon McConnell, The Delta Riggs
I have no idea what my scene is; I have been listening to Dubstep and a bit of Drum N Bass. I found a lot of Hip Hop and RnB stuff is getting very interesting again it is pushing different sounds out. I’ve been really into cycling since the early ‘90s; racing mountain bikes and racing road bikes. So between cycling and music there is not much time left, a bit of sleep now and again.
Mike Edwards, Jesus Jones

Well I’m still looking for my scene, and I think I might have found it. Between the pages of What’s My Scene Magazine.
Dave Faulkner, Hoodoo Gurus
My scene is driving fast cars and shooting guns.
Ace Frehley
Wherever there is music is where I feel most at home
Toby Robinson

Act III, Scene VI of King Lear. A tense and gripping scene wherein the ageing king informs his three daughters that they have all been accepted as contestants on Family Feud.
Ben Pobjie, comedian
Aside from music and everything creative, I love open-mind people, unexpected humour, seeing the world and nature, riding my bicycle, playing billiards. I’m also a fan of coffee, whiskey and most things vintage.
Jessica Stuart Few