With a healthy following across the breadth of their home continent, San Franciscan five-piece The Brothers Comatose are set to win more hearts, with their maiden voyage to East coast Australia this Spring.

Performing their own brand of Americana, folk and bluegrass, The Brothers Comatose are one of the exciting inclusions for the Hunter Valley’s Dashville Skyline- Cosmic Country Weekender, on October 1st. They’ll also be performing a number of special sideshows in Newcastle, Melbourne and Sydney.

Featuring brothers Ben and Alex Morrison on guitar and banjo, plus lead vocal duties, the group have released three acclaimed studio records, with their latest, City Painted Gold dropping in March this year.

The high-energy live band’s Australian tour continues a long journey for the Morrison brothers, who were born into a musical family. “It all sort of started before we ever picked up instruments,” Ben explains. “Our mom was in a folk quartet that sang beautiful songs in harmony. Alex and I would watch them rehearse for hours when we were kids.”

“We wrote this album living in San Francisco as it was changing from a weird, art-friendly mecca to a place that only super rich tech workers could afford,” Ben says. “Things started changing – venues were closing down, and artist and musician friends moved away. What is San Francisco without its weirdoes? That’s what the song City Painted Gold is about and that’s why it’s the name of this record.” 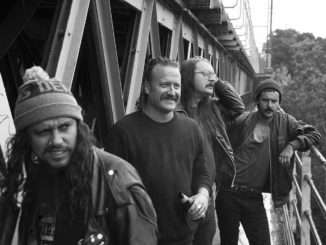 The car wash scene from Cool Hand Luke will do just fine thank you.
Old Gray Mule
Act III, Scene VI of King Lear. A tense and gripping scene wherein the ageing king informs his three daughters that they have all been accepted as contestants on Family Feud.
Ben Pobjie, comedian
We can be dirty, we can be imperfect, we can be classy, it doesn’t matter. We drift between scenes and eventually may just create our own.
The Ugly Kings

I’m in with the Out-Crowd
Dave Warner
All the wandering. The bastards and the angels. The sound of the rain and the pains of the heart. The silence. All the houses and all the rooms. All the keys and phones.
Raised By Eagles

Going to the river on sunny afternoons with the blow up dingys and resting your beers on lily pads.
The Frowning Clouds
Our scene is folk that are interested in change. Not just music, but breaking the norm, the boundaries and stereotype of Australian ’rock/pop’ music. Unpredictable, the question marks, the new jokers in town. Don’t Believe The Haze.
Slumberhaze

I like to think that I belong to the head-strong Independent Music Scene – where we – musos and audience and everyone in between – all make gigs/tours, recordings, releases happen for ourselves and work our arses off to keep it going for the rest of our lives – all for the love of Music!
Florelie Escano
Our scene is this big gorgeous wide world we live in all its majestic splendour!
Kim Salmon, The Darling Downs

Well I’m still looking for my scene, and I think I might have found it. Between the pages of What’s My Scene Magazine.
Dave Faulkner, Hoodoo Gurus
Currently, I’m completely enveloped by writing my book; trying to complete the manuscript for my tome.
Jeff Duff

Cool small bars with good food, good wine, good company
The Backsliders
When I’m not working in the studio or doing shows I’m at home with my partner and our baby so I guess they are my scene.
Way of the Eagle
Yass KFC
Simon, Loon Lake

Leadfinger is a very strange band, hard to define, but we are free.
Stew, Leadfinger
It’s beards.
Nathaniel Beard, The Beards

My scene is driving fast cars and shooting guns.
Ace Frehley
Currently its the Yarra River Trail I’m walking along. Generally my scene would be Melbourne. Nothing feels or compares to home.
Simon McConnell, The Delta Riggs
Cool venues with good beer on tap that don’t mind us getting loud and getting room grooving so hard you feel the floor shaking.
Papa G and The Starcats