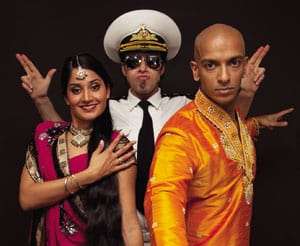 The Bombay Royale are originators of vintage Bollywood inspired sounds, from lonesome spaghetti to surf rock to spine-bending space disco, all overlaid with the voices of protagonists The Tiger and The Lady singing in Hindi, Bengali and other languages.

Originally conceived by The Skipper, The Bombay Royale have travelled far from their home in the suburban wilds of Melbourne and taken their unique sound to audiences in Europe, UK and the USA where their performances have been met with astonishment and critical acclaim.

The Bombay Royale’s debut album You Me Bullets Love won a place in iTunes Best of 2012 and #1 on the iTunes World Music charts. In June 2014, the band’s most recent offering has unleashed its trademark sound yet again and set off on an extraordinary musical safari on their latest album The Island of Doctor Electrico.

Playing live in the suitably themed Forbidden Temple room at The LuWOW, Fitzroy. Come early for a pre-show Mai-Tai for only $10.
Bombay Royale
Thursday 2nd April (Easter Eve)
The LuWOW
Advance tickets $20 from .bigcartel.com/
From 7pm 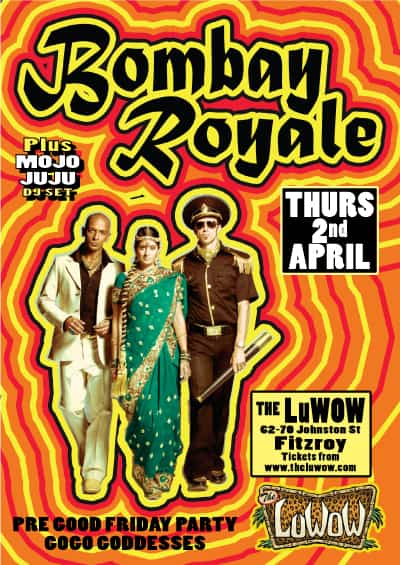 Big Sandy is an absolute Legend of the Vintage music scene with over 20 records to his name (including a 78rpm!), he sings liker an absolute angel and can reduce the most hardened street thug […]

I love being on a little boat near home in South West Victoria with a fishing line in the water, the Sun coming up or going down. I also love walking the streets of Melbourne or Manhattan or many of the beautiful towns and villages of Ireland or anywhere. My partner and my family are central to it all. I also love being in the midst of a great music session, anywhere, anytime, being transported into the soul of the Universe.
Shane Howard
I like the beach more than anything. The beach feels like home all year round. In terms of a scene…I actually prefer to hermit most of the time.
Abbe May

Flanelette pyjama pants.
Timberwolf
I like to think that I belong to the head-strong Independent Music Scene – where we – musos and audience and everyone in between – all make gigs/tours, recordings, releases happen for ourselves and work our arses off to keep it going for the rest of our lives – all for the love of Music!
Florelie Escano
Bed. Pringles. Whisky. Attenborough doco. Wham.
Marlon Williams

Well I’m still looking for my scene, and I think I might have found it. Between the pages of What’s My Scene Magazine.
Dave Faulkner, Hoodoo Gurus
That’s a hard one, although I do love anything electronic with an indie-pop feel!
Franki

I’m in with the Out-Crowd
Dave Warner
Scones, savory, sweet I don’t mind
The Wooden Sky

Currently its the Yarra River Trail I’m walking along. Generally my scene would be Melbourne. Nothing feels or compares to home.
Simon McConnell, The Delta Riggs
Going to the river on sunny afternoons with the blow up dingys and resting your beers on lily pads.
The Frowning Clouds
I will continue the continuum, singing my Songline.
Kutcha Edwards