It’s been six long years since BONNIE RAITT last toured Australia and Bluesfest Touring is proud to present her in two very special concerts, celebrating her latest album release, ‘Just Like That’, which currently sits at #1 on the USA Billboard Blues Charts. Bonnie is a multi-GRAMMY Award winner, and in 2022 was the recipient of the GRAMMY Lifetime Achievement Award, an award reserved for only the most special of musical artists. On top of that, to have the legendary MAVIS STAPLES as Bonnie’s special guest on this tour just makes these shows extra special – and extraordinary. Mavis herself is a GRAMMY Hall of Famer, and multi-GRAMMY Award winner, and has a string of anthems both from her Staples Singers years and as a solo artist. Mavis Staples was Bluesfest Touring’s last tour before Covid struck in March 2020 and we welcome back the 83-years-young legend back to Australia. The pairing of these two amazing talents will probably never occur again on our shores and I urge you not to miss out on seeing these concerts.
Two absolute legends, one memorable night.

MARCUS KING is one of the fastest rising artists. His ‘sold out’ first Australian tour in 2019, as well as the Covid-cancelled 2020 tour with its larger venues, only confirmed this. He returns for his second visit to Australia for Bluesfest Touring in April 2023.  At 26 years of age, with a GRAMMY-nominated debut album under his belt, produced by Dan Auerbach of The Black Keys, he is showing maturity far beyond his years. Marcus King is a ‘KING’ of unparalleled performance prowess with a dynamic live show, switching from swaggering rock to supersonic soul. He’s just teased us with three singles from his new album ‘Young Blood’, which drops on 26th August.
Hang on Sydney and Melbourne, Marcus King is heading your way next April.
But a gentle warning: Last time – his shows sold out – so get in fast and early !!

More than just a best-selling artist, respected guitarist, expressive singer, and accomplished songwriter, Bonnie Raitt is an institution in American music. The ten-time Grammy winner and Rock and Roll Hall of Famer has forged her own path to success in the blues, folk, and rock’n’roll scenes and she’s collaborated with many of music’s biggest-ever artists, including Toots & The Maytals, Ray Charles, Howlin’ Wolf, Keb’ Mo, Ladysmith Black Mambazo, Bruce Cockburn, John Lee Hooker, B.B. King, Aretha Franklin, Willie Nelson, and Tony Bennett. After a string of hits and creative breakthroughs in the ’70s and ’80s, Bonnie achieved new levels of popular and critical acclaim with her cherished multi-platinum albums ‘Nick of Time’ and ‘Luck of the Draw’, which featured hits, “Something To Talk About” and “I Can’t Make You Love Me” among others. In the years since, she has cemented her icon status and has been named one of the “100 Greatest Singers of All Time” and one of the “100 Greatest Guitarists of All Time” (Rolling Stone). With ‘Just Like That…’, her first new album in more than six years, Raitt continues to draw on the range of influences that have shaped her legendary career, while creating something that speaks to the circumstances and challenges of these unprecedented times. Bonnie continues to use her influence to affect the way music is perceived and appreciated in the world.
As known for her lifelong commitment to social activism as she is for her music, Bonnie Raitt has long been involved with the environmental movement, performing concerts around oil, nuclear power, mining, water and forest protection since the mid 70’s. She was a founding member of MUSE (Musicians United for Safe Energy) which produced the historic concerts, album and movie NO NUKES and continues to work on safe energy issues in addition to environmental protection, social justice and human rights, as well as creator’s rights and music education.

MAVIS STAPLES
Mavis Staples is a Legend, an Icon, and a Global National Treasure, and no stranger to our shores. Mavis Staples was Bluesfest Touring’s last tour before Covid struck in March 2020 and now, with her spectacular twelfth studio album and first full-length collaboration with multi-GRAMMY Award-winner Ben Harper, we welcome back the 83-years-young legend back to Australia as Special Guest on the Bonnie Raitt ‘Just Like That’ 2023 Tour.
Hailed by NPR as “one of America’s defining voices of freedom and peace,” Mavis Staples is the kind of once-in-a-generation artist whose impact on music and culture would be difficult to overstate. She’s both a Blues and a Rock and Roll Hall of Famer; a civil rights icon; a GRAMMY Award-winner; a chart-topping soul/gospel/R&B pioneer; a National Arts Awards Lifetime Achievement recipient; and a Kennedy Center honoree. She marched with Dr. Martin Luther King, Jr., performed at John F. Kennedy’s inauguration, and sang in Barack Obama’s White House. She’s collaborated with everyone from Prince and Bob Dylan to Arcade Fire and Hozier, from Nick Cave, Valerie June and tUnE-yArDs. She has blown away countless festivalgoers from Newport Folk and Glastonbury to Lollapalooza, Bonnaroo and our own Bluesfest Byron Bay, performed with The Band at The Last Waltz, and graced the airwaves on Fallon, Colbert, Ellen, Austin City Limits, Jools Holland, the GRAMMYs, and more.
“I’m the messenger,” Mavis Staples said on the eve of her 80th birthday. “That’s my job—it has been for my whole life—and I can’t just give up while the struggle’s still alive. We’ve got more work to do, so I’m going to keep on getting stronger and keep on delivering my message every single day.” 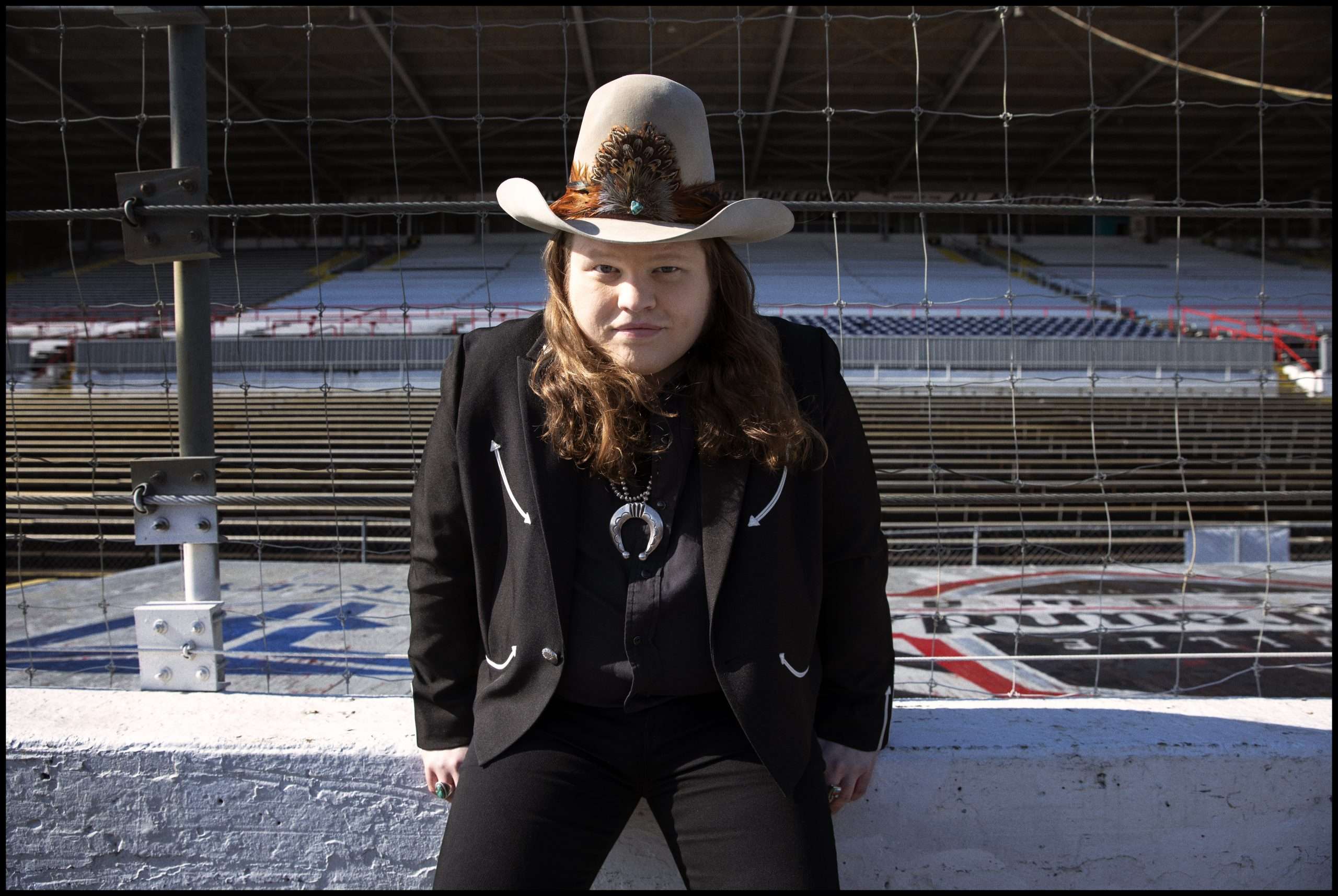 MARCUS KING
Marcus King sold out his first tour of Australia in 2019. He also raised the roof with his performance at that year’s Bluesfest. GRAMMY-Award-nominated artist, performer, and songwriter Marcus King was downright destined to play music. By eight-years-old, the fourth generation Greenville, SC native performed alongside pops, grandpa, and his uncles for the first time. Logging thousands of miles on the road as “The Marcus King Band,” he established himself with unparalleled performance prowess and a dynamic live show. During 2020, he linked up with Dan Auerbach [The Black Keys] and cut his solo debut El Dorado, garnering a GRAMMY® Award nomination in the category of “Best Americana Album.”
Marcus King can simultaneously switch from swaggering rock to supersonic soul, having written songs and performing onstage for half his lifetime. All five members of the band—drummer Jack Ryan, bass player Stephen Campbell, trumpeter/trombonist Justin Johnson, keyboard player, and sax player Chris Spies—create a blistering, yet soulful unit that has honed their synergy through endless touring. Marcus started learning guitar at age three or four. He has played professionally since he was 11 and always knew he wanted to make music his life. A fourth-generation musician, Marcus has followed in his family’s footsteps. His grandfather was a country guitarist, and his father continues to perform live. This year he launched a Signature Gibson custom guitar modelled after the ES-345 his grandfather used to play. From the start, Marcus earned rave reviews for his kinetic musicianship with The Washington Post describing him as a “guitar phenom.” His debut solo album, El Dorado topped the Americana radio charts and has received critical acclaim from the likes of NPR, Rolling Stone, American Songwriter, and Rolling Stone, who described him as an “electrifying rock performer.” Marcus recently completed a string of dates with Chris Stapleton, who called him “one of his favorite artists” when he joined him onstage. Marcus King continues to re-write his fastmoving and surprising story. You can hear change in the wisdom of his lyrics and deeply soulful vocals, bringing sheer musical command to every performance. He’s just teased us with three singles from his new album ‘Young Blood’, which drops on 26th August.
Hang on Sydney and Melbourne, Marcus King is heading your way next April.
But a gentle warning: Last time – his shows sold out – so get in fast and early !!

Nowadays, with ease we “Google” a cocktail recipe, but lose the pleasure in the tactile search and find. In search of an appropriate Queen’s Birthday holiday cocktail, I enjoyed rifling through Jane Rocca’s Cocktail books, attempting to find […]

Cherie Currie‘s scene is as individual as her Runaways’ days. The former singer of “teenage jailbait rock group”, The Runaways, states: “My scene is: have chainsaw, will travel”. It is hard to imagine that the […]

Star Scene: Cody Blanchard & Will Sprott ~ SHANNON and The CLAMS

Cody Blanchard & Will Sprott of Shannon & The Clams spoke to Mary Boukouvalas about their latest release, Year of the Spider, and about their upcoming Australian tour … Love Police Touring Presents SHANNON & […]

That’s a hard one, although I do love anything electronic with an indie-pop feel!
Franki
Currently, I’m completely enveloped by writing my book; trying to complete the manuscript for my tome.
Jeff Duff
Flanelette pyjama pants.
Timberwolf
We can be dirty, we can be imperfect, we can be classy, it doesn’t matter. We drift between scenes and eventually may just create our own.
The Ugly Kings
Our scene is folk that are interested in change. Not just music, but breaking the norm, the boundaries and stereotype of Australian ’rock/pop’ music. Unpredictable, the question marks, the new jokers in town. Don’t Believe The Haze.
Slumberhaze
My scene is Brunswick. I love it. It provides me with just about everything I need.
About Charlie Marshall
I think my style is more just making cameos in everyone else’s scene.
Mojo Juju
It’s a delirium, really, but I like to live like this.
Hugo Race
My scene is finding any excuse to dance with my 2 year old daughter Ruby.
Matthew Hardy, Comedian
The beach. Tea with gin at your grandparents house. They have the best stories.
Betty & Oswald
I like to think that I belong to the head-strong Independent Music Scene – where we – musos and audience and everyone in between – all make gigs/tours, recordings, releases happen for ourselves and work our arses off to keep it going for the rest of our lives – all for the love of Music!
Florelie Escano
Yass KFC
Simon, Loon Lake
I don’t wish to belong to any scene that would have me as a member (with thanks to Groucho Marx).
Bob Spencer, Raw Brit
No set scene. We have played with a variety of bands from King Parrot to The Datsuns. Offer us a show and give us a try!
Los Hombres Del Diablo
Well these days my scene tends to revolve around my computer and being nudged by my dog to take her out for a walk. And then having my wife shout at me for spending time on my computer. I’m loving it actually. I’m quite relishing that scene. I miss them both very much.
Peter Hook, Joy Division/New Order/The Light
If you’re a Max Chillington then you’re our scene.
Gunslingers
I like the beach more than anything. The beach feels like home all year round. In terms of a scene…I actually prefer to hermit most of the time.
Abbe May
I am a simple man. My scene is simple. I like playing metal and spending time with my family.
Waclaw ”Vogg” Kieltyka, Decapitated
All of the above and more in my shed every Friday night
Hound
It’s beards.
Nathaniel Beard, The Beards
Obviously to create music. My family. I love driving my Ferraris.
Yngwie Malmsteen
Deep 70s disco, wonky synths, shady lyrics, fairy lights and cheap wine.