The team behind Blood, Sweat & Beers is excited to announce the line-up for the 2018 festival taking place at The Factory Theatre in Sydney on June 30.

Way back in early 2009 three friends agreed on the logo and line up for a little one day soiree they called Blood, Sweat & Beers. Now nine years later, they’re doing it one last time at The Factory Theatre. That’s right folks, there won’t be another after this, so it’s your last chance to have a good time with the BSB crew and this genuinely excellent line up of bands spread over three stages around the Factory Complex.

At just $50 a pop, tickets for this unmissable event are not only top notch value for money, a dollar from each ticket is going to Don’t Fret Club and Support Act – helping our friends who need a hand.

BSB has always worked on the premise of giving younger bands a chance to get on bigger stages alongside their more popular peers, in a nice inclusive space with no bigotry towards style or people, and this year will be no different.

I guess you’ll want to know who’s playing now right? Well here’s the first lot, still got some acoustic types to come too just like the good ol’ days… 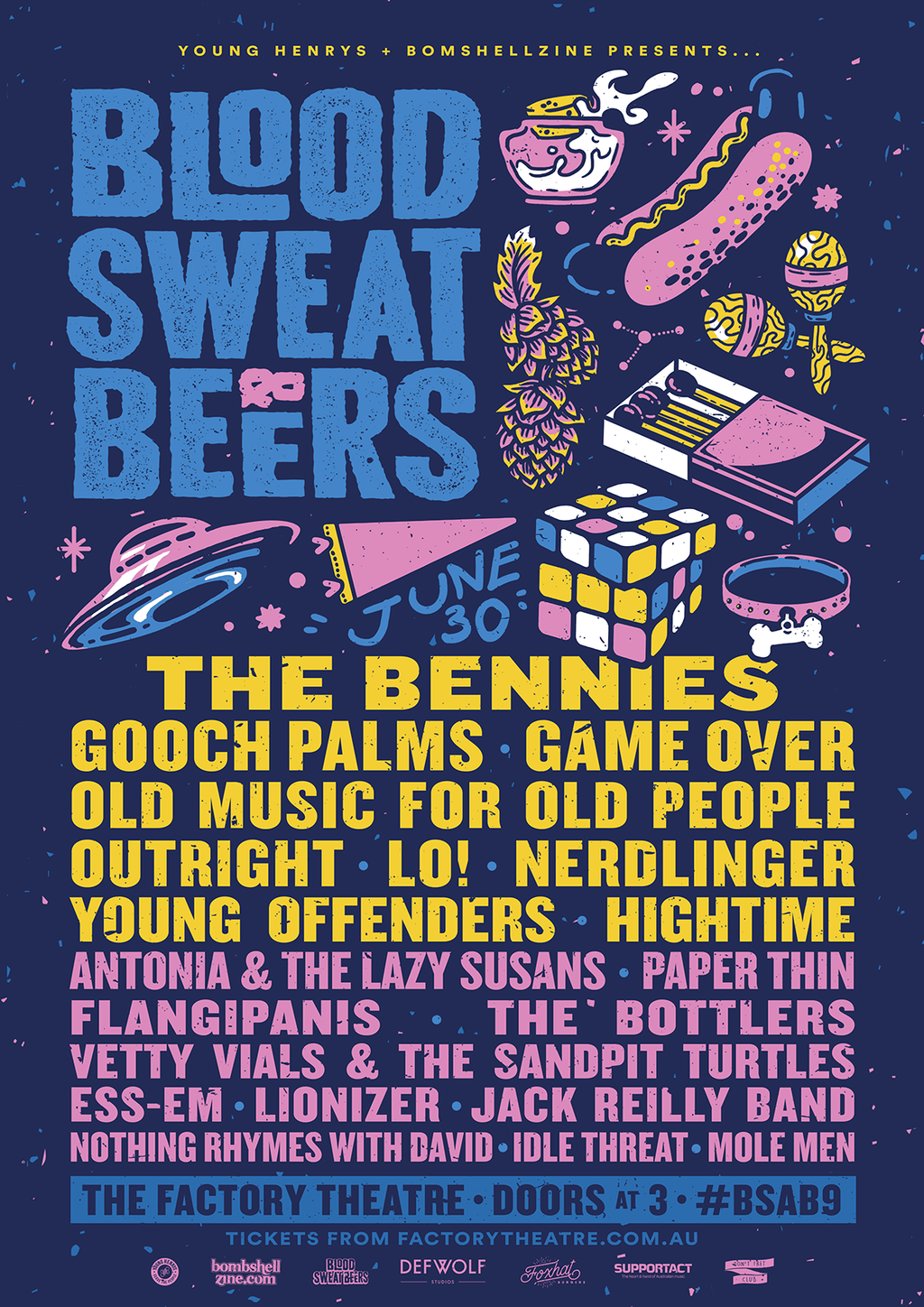 The car wash scene from Cool Hand Luke will do just fine thank you.
Old Gray Mule
I’m in with the Out-Crowd
Dave Warner
When I’m not working in the studio or doing shows I’m at home with my partner and our baby so I guess they are my scene.
Way of the Eagle
Cool small bars with good food, good wine, good company
The Backsliders
Local bands at sticky carpet venues. Vinyl. Social networking. Keeping healthy in order to play full throttle live sets. Loud rehearsals. Good people with creative ideas. PRIMITIVE ROCK.
Jon S Williams of City of Cool

I like to think that I belong to the head-strong Independent Music Scene – where we – musos and audience and everyone in between – all make gigs/tours, recordings, releases happen for ourselves and work our arses off to keep it going for the rest of our lives – all for the love of Music!
Florelie Escano
I love being on a little boat near home in South West Victoria with a fishing line in the water, the Sun coming up or going down. I also love walking the streets of Melbourne or Manhattan or many of the beautiful towns and villages of Ireland or anywhere. My partner and my family are central to it all. I also love being in the midst of a great music session, anywhere, anytime, being transported into the soul of the Universe.
Shane Howard
Anywhere there is good company, great conversation, and a glass of red.
Helen Perris

Well I’m still looking for my scene, and I think I might have found it. Between the pages of What’s My Scene Magazine.
Dave Faulkner, Hoodoo Gurus
The TV show “Full House
World Wild

Leadfinger is a very strange band, hard to define, but we are free.
Stew, Leadfinger
Tunes, mates, and honesty. No dickhead policy!
Buddha In A Chocolate Box
Currently its the Yarra River Trail I’m walking along. Generally my scene would be Melbourne. Nothing feels or compares to home.
Simon McConnell, The Delta Riggs
Our scene is folk that are interested in change. Not just music, but breaking the norm, the boundaries and stereotype of Australian ’rock/pop’ music. Unpredictable, the question marks, the new jokers in town. Don’t Believe The Haze.
Slumberhaze

Going to the river on sunny afternoons with the blow up dingys and resting your beers on lily pads.
The Frowning Clouds
Bed. Pringles. Whisky. Attenborough doco. Wham.
Marlon Williams

Act III, Scene VI of King Lear. A tense and gripping scene wherein the ageing king informs his three daughters that they have all been accepted as contestants on Family Feud.
Ben Pobjie, comedian
Book clubs, philosophy and extreme black metal
Elsen Price