Melbourne hard rock icons, Bigger Than Jesus will be playing a special show at
Chasers in Melbourne on November 29!

Back in the 90s, Bigger Than Jesus’ gigs were a sight to behold. Fronted by Steve Lucas, (frontman of Aussie legendary punks, X), the band knew how to do rock hard put on a show that was totally in your face. Wooden crosses were burned on stage making a mockery of the KKK while ceilings, gear and other loose objects were sometimes destroyed. Their reputation as one of the most exciting and entertaining Australian bands was second to none.

While that’s less likely to happen in this day and age, the counter-culture attitude behind Bigger Than Jesus remains strong. The band came roaring back in October 2018 with their first official audio release in over 2 decades. The unstoppable, adrenaline rushing, masterpiece entitled ‘One For The Road’, a 6 track offering featuring lost tracks from the critically acclaimed 1993 Killervision sessions including ‘One for the Road’, ‘Laughing’, ‘Just My Life’ and ‘Wicked Love’ plus new material.

Two new music videos for BTJ songs will be screened at the Chasers show!

An incredibly tight live band, Bigger Than Jesus command your attention with their explosive, atmospheric and energetic performances and they still know how to do it big!

This special show marks the 31st birthday of Outlaw Hard’n’Fast at Chasers and will also be a fond farewell for guitarist Brett Kingman as he plays his last gig with his bandmates.

Joining Bigger Than Jesus will beEnvy Marshall (featuring members of the Screaming Jets) and the Blacktides who will be launching their new EP on the night.

‘One For The Road’ is out via Dinner For Wolves.
www.dinnerforwolves.com/onefortheroad 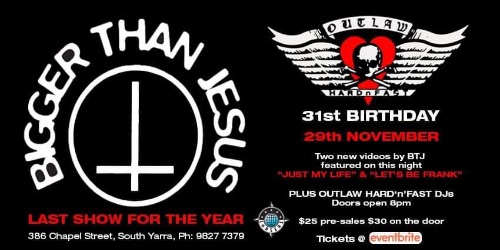 Bigger Than Jesus are authentically Australian – both sonically and in their approach to recording & performing. Steve Lucas’ vocals (founding member of infamous Aussie punk band X) are delivered with a refreshing Aussie tone. Combined with the twin guitar attack from Hank Oudendyk and Brett Kingman (hired gun for numerous Australian touring acts) and the backbone provided by Kevin McMahon (No) and Paul Foenander.

‘One for the road’, ‘Laughing, ‘Just My Life’ & ‘One Of Us’ were first recorded at Gotham with Tony Cohen in 1994 before being re-recorded at Sing Sing and finished by Scott Kingman (Horsehead, The Screaming Jets) in 1996. ‘Wicked Love’ was first recorded at Gotham around the same time; 1994, and finished by Scott Kingman in 1996. ‘Night Call’ was recorded and produced by Bigger Than Jesus & Mark Forrester at Platinum Studios from  December 1992 to January 1993.

‘One For The Road’ was skillfully remastered by Gil Mathews at Aztec Studios in 2018 and is now poised and waiting to knock your head off.

I like the beach more than anything. The beach feels like home all year round. In terms of a scene…I actually prefer to hermit most of the time.
Abbe May
Well I’m still looking for my scene, and I think I might have found it. Between the pages of What’s My Scene Magazine.
Dave Faulkner, Hoodoo Gurus
Quirky cabaret bars that serve a mean G&T and boast a stellar cocktail list..which is why you’ll always find me returning to The Butterfly Club! I also love the buzz of a Fringe or Cabaret Festival, or a smart Opening Night. Any excuse for a dress up, really!
Amelia Ryan, Lady Liberty
I love being on a little boat near home in South West Victoria with a fishing line in the water, the Sun coming up or going down. I also love walking the streets of Melbourne or Manhattan or many of the beautiful towns and villages of Ireland or anywhere. My partner and my family are central to it all. I also love being in the midst of a great music session, anywhere, anytime, being transported into the soul of the Universe.
Shane Howard
Our gigs have an air of danger and sex. Beautiful women are free to express themselves and are as dangerous as hell. Everybody can have a good time ’cos there’s a lot of love in the room and we just can’t help but stomp out that primeval swamp boogie ooze.
Chris Russell’s Chicken Walk
The Astor Theatre on chapel st. Old cinema with copious amounts of atmosphere playing classic films (Chaplin, Gene Kelly, Kubrick, etc) and me with a honeycomb choc top spilt on my Tshirt because that’s just how I roll.
Jude Perl, Comedian
The dog park’s pretty good. I have a couple of miniature pinchers. And they’re the loves of my life. I take them for walks to the dog park; I’ve got a Harley Davidson I ride around. It’s not too exciting. It used to be sex, drugs and rock n roll; now I walk my dogs.
Stan Lee, The Dickies
Well these days my scene tends to revolve around my computer and being nudged by my dog to take her out for a walk. And then having my wife shout at me for spending time on my computer. I’m loving it actually. I’m quite relishing that scene. I miss them both very much.
Peter Hook, Joy Division/New Order/The Light
All the wandering. The bastards and the angels. The sound of the rain and the pains of the heart. The silence. All the houses and all the rooms. All the keys and phones.
Raised By Eagles
Anywhere there is good company, great conversation, and a glass of red.
Helen Perris
I will continue the continuum, singing my Songline.
Kutcha Edwards
I am a simple man. My scene is simple. I like playing metal and spending time with my family.
Waclaw ”Vogg” Kieltyka, Decapitated
Bed. Pringles. Whisky. Attenborough doco. Wham.
Marlon Williams
The TV show “Full House
World Wild
My scene is at the moment Big Wongs General Tsos Chicken as I get sauce on the keys typing to you :-)
Brian Mackey
No set scene. We have played with a variety of bands from King Parrot to The Datsuns. Offer us a show and give us a try!
Los Hombres Del Diablo
Deep 70s disco, wonky synths, shady lyrics, fairy lights and cheap wine.