Big Sandy is an absolute Legend of the Vintage music scene with over 20 records to his name (including a 78rpm!), he sings liker an absolute angel and can reduce the most hardened street thug to tears and tackles a wide range of styles from soul (teeming up with El Vez in the “Los Dos Robertos soul revue”-look out Sam and Dave), to Western Swing, Rhythm and Blues, Sixties pop, Frat, Rock and Roll and country. All with his unmistakable East LA groove. Big Sandy is a torchbearer for American roots music and as a bandleader and entertainer, he has few contemporaries 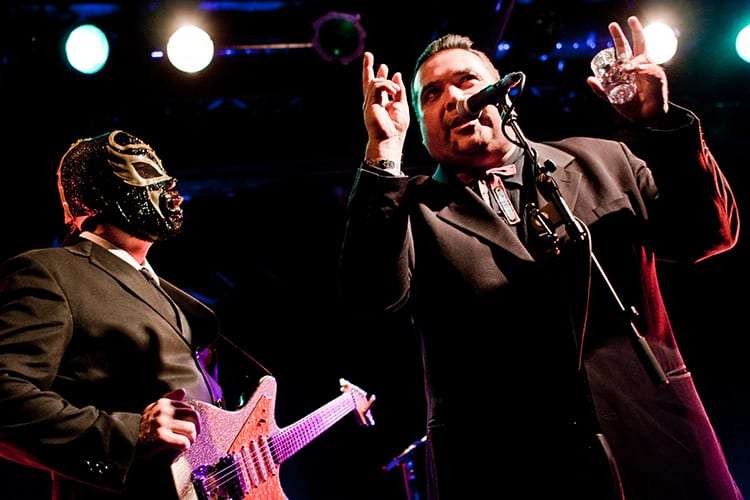 When it comes to delivering high-energy rock and roll instrumental music, no one equals the finesse and power of USA band Los Straitjackets. They are easily the Top Honchos globally when it comes to instrumental music carrying on the Instro torch from such groups as The Ventures and Shadows. Since first donning their trademark Mexican masks in 1994, the Grammy-nominated quartet has recorded 11 albums, played all over the world, and still continues to inspire audiences to dance and smile with their awe inspiring acrobatic stage show.

Los Straitjackets join forces with Big Sandy, for a Rhythm and Soul Rockin Surf spectacular tour across Australia. After their previous collaborations left audiences breathless and their 45RPM recording of ‘La Plaga’ hit the ‘best of list” in over 6 countries.

The result is a dynamic and exciting show with elements of surf, rockabilly, 60s groove, rock and soul, that is sure to leave audiences howling for more.

The Bombay Royale are originators of vintage Bollywood inspired sounds, from lonesome spaghetti to surf rock to spine-bending space disco, all overlaid with the voices of protagonists The Tiger and The Lady singing in Hindi, […]

American group Los Straitjackets need to be seen to be believed. One of the best instrumental surf bands around, they were the pioneers of wearing the “Lucha Libre” Mexican wrestling masks when the band formed […]

Currently its the Yarra River Trail I’m walking along. Generally my scene would be Melbourne. Nothing feels or compares to home.
Simon McConnell, The Delta Riggs
Sitting in the sun, in a nice chair, with a good book.
James Reyne

Leadfinger is a very strange band, hard to define, but we are free.
Stew, Leadfinger
My scene is driving fast cars and shooting guns.
Ace Frehley
No set scene. We have played with a variety of bands from King Parrot to The Datsuns. Offer us a show and give us a try!
Los Hombres Del Diablo

Right now it’s a room with no lights on. An unmade bed. A laptop with 9% battery and a mosquito that just refuses to die.
Dave Larkin, Dallas Crane
Melbourne. Nowhere else is as great as Melbourne.
Brat Farrar

Well I’m still looking for my scene, and I think I might have found it. Between the pages of What’s My Scene Magazine.
Dave Faulkner, Hoodoo Gurus
The dog park’s pretty good. I have a couple of miniature pinchers. And they’re the loves of my life. I take them for walks to the dog park; I’ve got a Harley Davidson I ride around. It’s not too exciting. It used to be sex, drugs and rock n roll; now I walk my dogs.
Stan Lee, The Dickies

When I’m not working in the studio or doing shows I’m at home with my partner and our baby so I guess they are my scene.
Way of the Eagle
I’m in with the Out-Crowd
Dave Warner
Obviously to create music. My family. I love driving my Ferraris.
Yngwie Malmsteen

I love being on a little boat near home in South West Victoria with a fishing line in the water, the Sun coming up or going down. I also love walking the streets of Melbourne or Manhattan or many of the beautiful towns and villages of Ireland or anywhere. My partner and my family are central to it all. I also love being in the midst of a great music session, anywhere, anytime, being transported into the soul of the Universe.
Shane Howard
Tunes, mates, and honesty. No dickhead policy!
Buddha In A Chocolate Box
Currently, I’m completely enveloped by writing my book; trying to complete the manuscript for my tome.
Jeff Duff