One Woman performing as one very endearing Bloke

Created and Performed by Selina Jenkins

A 2014 Green Room Award nominee, Jenkins is a seasoned performer with astonishing vocal ability, depth, and sincerity, which is no small feat for a woman in a beard. 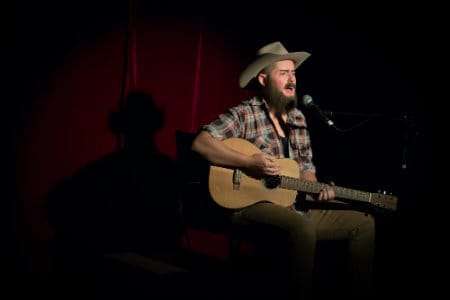 After touring extensively throughout 2014, Beauʼs newest self titled show has received awards, rave reviews and standing ovations from both national and international audiences, including 5 Stars in Indianapolis.

An artist who offers a ʻMoney Back Quality Guaranteeʼ on their work is a rare find indeed. But it is a risk that the creator of this unforgettable character is more than happy to take.

Don’t miss the outstanding Beau Heartbreaker at this year’s MICF.

“Tour de Force… The Jenkins/Heartbreaker duo is not to be missed. It really is a triumph.” – Indianapolis Performing Arts Examiner

Q&A Tell us about your new stand up show? The show is basically an hour of my best material, themed around the fact that I have been in the UK for 14 years and I […]

Patti Smith’s Horses 40th anniversary tour didn’t come to us, so in true Aussie style ‘we’ took things into our own hands and brought Horses to the Melbourne Town Hall sans Smith. That’s not to […]

Ventriloquist/comedian Sarah Jones and magician/comedian Nick Johnson are Jonestown. Jones kicks off the sketch with stand up, priming the throng and is later joined by Johnson. Soon they are Guinea Pigs, clad in matching grey […]

I love being on a little boat near home in South West Victoria with a fishing line in the water, the Sun coming up or going down. I also love walking the streets of Melbourne or Manhattan or many of the beautiful towns and villages of Ireland or anywhere. My partner and my family are central to it all. I also love being in the midst of a great music session, anywhere, anytime, being transported into the soul of the Universe.
Shane Howard
Experimental electronica, musical metacreation, multiplicitous media, hacking.
Ollie Brown

When I’m not working in the studio or doing shows I’m at home with my partner and our baby so I guess they are my scene.
Way of the Eagle
Deep 70s disco, wonky synths, shady lyrics, fairy lights and cheap wine.

Act III, Scene VI of King Lear. A tense and gripping scene wherein the ageing king informs his three daughters that they have all been accepted as contestants on Family Feud.
Ben Pobjie, comedian
My scene is driving fast cars and shooting guns.
Ace Frehley
My family, my friends, my home.
Cory Putman, Norma Jean

The car wash scene from Cool Hand Luke will do just fine thank you.
Old Gray Mule
Flanelette pyjama pants.
Timberwolf
What’s my scene? well…
And another thing I’ve been wondering lately
Oh, baby,
Tell me where have you been?
Now the stage is set
Where’s my Juliet, baby?
Is it maybe
My Midsummer Night’s Dream?
What’s my scene?
Clowns

Going to the river on sunny afternoons with the blow up dingys and resting your beers on lily pads.
The Frowning Clouds
Wherever there is music is where I feel most at home
Toby Robinson