News Ticker
WEDNESDAY APRIL 15, 2015 – Hot UK comic Luisa Omielan has capped off an epic week with a nomination overnight for the prestigious top Barry Award at this year’s Melbourne International Comedy Festival for her smash-hit debut stand up show What would Beyonce Do?!
Omielan, whose MICF Gala spot went viral last week and amassed over 9 million views worldwide on her Facebook page, is ecstatic with the nomination, which sees her competing for Australia’s biggest live comedy accolade.

“I have been doing this show since 2012 and it’s never been nominated for anything. It’s so nice that in my first year in Australia, people are loving it and it’s got recognition so I couldn’t be happier!” she said.

Named in honour of Barry Humphries, the winner will be announced this Saturday night during the Festival’s final weekend.

Born from ‘falling in love with every Mr Unavailable’ and, like Beyoncé, still being styled by her mum, What would Beyoncé Do?! has been phenomenally successful overseas after Omielan by-passed the usual UK club/progression route and cultivated an audience of her own. From selling out in a small, unfunded venue at the Edinburgh Fringe a few years ago, the show has since sold-out five re-runs at London’s Soho Theatre. It remains one of the most successful breakout shows to emerge from the Edinburgh Fringe Festival. 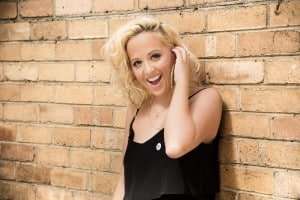 London-based Omielan is a stand up, improv and actress who has been performing on the London circuit since 2008. A voracious worker, Omielan has performed 11 shows at the Edinburgh Fringe in the past five years.Having sold out two Edinburgh seasons, five at the Soho, plus sell out shows in LA, New York, Toronto, Montreal’s Just For Laughs and Singapore, 2014 also included a West End run for the show, as well as her first comedy pilot for BBC’s Radio 2, Luisa’s Omielan’s Party.

Omielan will head to the Sydney Comedy Festival next week.