News Ticker
Take it from Lemmy, BARB WIRE DOLLS are the future of Rock and Roll!

BARB WIRE DOLLS are one of the most vital new bands in music today, representing all that is inspiring and furious about rock and roll. The band intelligently weaves sub-genres of punk, grunge, and metal, producing an urgent sound that is truly unique.  [pullquote]“BARB WIRE DOLLS are the most explosive and exciting new punk band I’ve seen in decades! They are gonna change the face of music and save rock and roll as we know it!” – Mickey Leigh/brother of Joey Ramone[/pullquote] Hailing from an artist commune on the island of Crete, the band sold everything they owned and left crisis-ridden Greece in 2010 for Los Angeles, at the invite of legendary KROQ DJ Rodney Bingenheimer. Upon their arrival in California, BARB WIRE DOLLS immediately sold out the world famous Roxy Theatre in Hollywood, boasting a live show that is second to none.

Electrifying rock of this magnitude did not go unnoticed by the elder statesman of the Sunset Strip, the incomparable, irreplaceable Lemmy Kilmister of Motörhead. After seeing BARB WIRE DOLLS live, Lemmy took an immediate interest in the band and placed them under his supportive wing. [pullquote] “If you were bummed that you missed out on the Sex Pistols and Black Flag because you were only one, or not even born yet, here’s your chance to catch one of the best bands playing that style today. From their music to their attitude, BARB WIRE DOLLS embody that same spirit of the late ’70s punk scene.” – Washington Times[/pullquote]

Out to take over the punk rock scene while smashing all misconceptions about women in rock today, BARB WIRE DOLLS‘ cultural and musical immediacy is not to be missed. 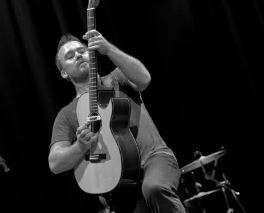 Snap Scene: Murder One: A Party for Lemmy

Leadfinger is a very strange band, hard to define, but we are free.
Stew, Leadfinger
Hiking a 14K foot mountain in Colorado
Cole Washburn

When I’m not working in the studio or doing shows I’m at home with my partner and our baby so I guess they are my scene.
Way of the Eagle
My scene is driving fast cars and shooting guns.
Ace Frehley
Melbourne. Nowhere else is as great as Melbourne.
Brat Farrar

Act III, Scene VI of King Lear. A tense and gripping scene wherein the ageing king informs his three daughters that they have all been accepted as contestants on Family Feud.
Ben Pobjie, comedian
If you’re a Max Chillington then you’re our scene.
Gunslingers

Right now it’s a room with no lights on. An unmade bed. A laptop with 9% battery and a mosquito that just refuses to die.
Dave Larkin, Dallas Crane
Yass KFC
Simon, Loon Lake

The car wash scene from Cool Hand Luke will do just fine thank you.
Old Gray Mule
Currently its the Yarra River Trail I’m walking along. Generally my scene would be Melbourne. Nothing feels or compares to home.
Simon McConnell, The Delta Riggs
I like to think that I belong to the head-strong Independent Music Scene – where we – musos and audience and everyone in between – all make gigs/tours, recordings, releases happen for ourselves and work our arses off to keep it going for the rest of our lives – all for the love of Music!
Florelie Escano
Staying home out of harms way.
Peter Milley, Cairo Club Orchestra