ST VALENTINE’S DAY, 2018: Aussie rock icon, Sarah McLeod, announces the launch of her fashion label, BAD VALENTINE. The range will debut with a small selection of T-Shirts that project bold statements for the brave at heart. McLeod’s single of the same name will also launch with a video clip featuring models Lola Van Vorst, Tuyamaa Tumenjargal (Miss Mongolia), Natalie Sweete in the reimagined Enchantment Under The Sea scene from Back To The Future!

With a penchant for embellishing T-Shirts for stage for many years, and more recently making her own T-Shirts for her solo shows and performances with her band The Superjesus, the calling became an obvious one. An overwhelming number of requests from fans wanting to know where they could get the same T’s was the catalyst to bring BAD VALENTINE to life.

Well known for her palpable energy and strong sense of self, Sarah has never been shy of being bold and brave. Adored for her straight up ballsy rock & roll character, she has moved through her 20 plus years in the media spotlight with a pinch of endearing larrikin, and a fistful of authenticity. ”

BAD VALENTINE is a clothing label dedicated to the celebration of self-confidence, empowerment, and freedom of speech. As Queen Latifah once said: “Be bold, be brave enough to be your true self”.

“I want people to feel empowered wearing these shirts. They are tongue in cheek but also a very powerful tool of self-awareness and confidence. I want people to know its ok to be bold and its ok to be confident and its quite alright to let ‘em all know you feel that way by pasting it across your chest in broad daylight! Yes you may get some funny looks but if you back it up with a smile and spades of conviction, you’ll BE the business.” Says McLeod… 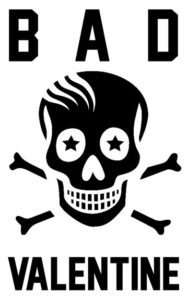 BE BRAVE. BE BOLD. BE BAD. BAD VALENTINE

Sarah is also gearing up to take Australia by storm in her role as St Jimmy (shared with Grinspoon’s Phil Jamieson, and Magic Dirt’s Adalita) in Green Day’s award winning Broadway phenomenon American Idiot. Check out her knockout performance at the Australian Open recently:

The scenes of Evan Stanley and Mike Lefton are one and the same: their band, The DIVES. Stanley states: “I think we all eat, breathe, sleep The DIVES.” Lefton agrees and expands: “I do agree. Having said that […]

Kim Wilde’s scene is “hanging out” ~ in her garden. Not quite what you’d expect from such a talented and renowned pop icon, but as Wilde explains it’s about finding a balance: “My favourite place […]

Right now it’s a room with no lights on. An unmade bed. A laptop with 9% battery and a mosquito that just refuses to die.
Dave Larkin, Dallas Crane
Cool small bars with good food, good wine, good company
The Backsliders
Cool venues with good beer on tap that don’t mind us getting loud and getting room grooving so hard you feel the floor shaking.
Papa G and The Starcats
I like the beach more than anything. The beach feels like home all year round. In terms of a scene…I actually prefer to hermit most of the time.
Abbe May
Rock’n’Roll
About Heels on Decks
Ep. 1 Series 3 of BBC’s ’Sherlock’ where Sherlock bungee jumps through a window and kisses Molly Hooper.
Miss Adelaide Everheart from Early Burley Burlesque
I love being on a little boat near home in South West Victoria with a fishing line in the water, the Sun coming up or going down. I also love walking the streets of Melbourne or Manhattan or many of the beautiful towns and villages of Ireland or anywhere. My partner and my family are central to it all. I also love being in the midst of a great music session, anywhere, anytime, being transported into the soul of the Universe.
Shane Howard
“Malcolm Hill is a lifetime member of the Melbourne Music Mafia and part of the ratpack of post punk Melbourne artists who have been keepin’ it real across diverse art forms for thirty years.”
Malcolm Hill
Act III, Scene VI of King Lear. A tense and gripping scene wherein the ageing king informs his three daughters that they have all been accepted as contestants on Family Feud.
Ben Pobjie, comedian
Beer, riffs, good people, good food and new adventures, anywhere those things exist, that’s my scene!
Andy, Don Fernando
The beach. Tea with gin at your grandparents house. They have the best stories.
Betty & Oswald
Our gigs have an air of danger and sex. Beautiful women are free to express themselves and are as dangerous as hell. Everybody can have a good time ’cos there’s a lot of love in the room and we just can’t help but stomp out that primeval swamp boogie ooze.
Chris Russell’s Chicken Walk
Anyone who welcomes a hairy, gold wearing, hot air blowing idiot to a dinner table is my scene.
Henry Wagons
Currently, I’m completely enveloped by writing my book; trying to complete the manuscript for my tome.
Jeff Duff
Wherever there is music is where I feel most at home
Toby Robinson
I like to be out in the nature, to get away. Go to the woods. My dad lives in the woods. Maybe once or twice a year I don’t have phone reception there is no Wi-Fi
Fredrik Åkesson, Opeth
My scene is Brunswick. I love it. It provides me with just about everything I need.
About Charlie Marshall
Sitting in the sun, in a nice chair, with a good book.
James Reyne
Our scene is in the city of Bath, a small city with a very big musical identity, we play the British festivals and I am also in the ’choirs scene’. We are also in other bands for fun, music all the way, roll on summer!
Su Hart, Baka Beyond
Our scene is folk that are interested in change. Not just music, but breaking the norm, the boundaries and stereotype of Australian ’rock/pop’ music. Unpredictable, the question marks, the new jokers in town. Don’t Believe The Haze.
Slumberhaze
Leadfinger is a very strange band, hard to define, but we are free.
Stew, Leadfinger
I think my style is more just making cameos in everyone else’s scene.
Mojo Juju
My scene is at the moment Big Wongs General Tsos Chicken as I get sauce on the keys typing to you :-)
Brian Mackey
I just do my best to live a life full of the things I love. Rock’n’roll, photography, New York City – they are three things right there that I love a lot!
Paul Miles
Tunes, mates, and honesty. No dickhead policy!
Buddha In A Chocolate Box
Going to the river on sunny afternoons with the blow up dingys and resting your beers on lily pads.
The Frowning Clouds
Obviously to create music. My family. I love driving my Ferraris.
Yngwie Malmsteen
Anywhere there is good company, great conversation, and a glass of red.
Helen Perris
It’s a delirium, really, but I like to live like this.
Hugo Race
Melbourne. Nowhere else is as great as Melbourne.
Brat Farrar
Deep 70s disco, wonky synths, shady lyrics, fairy lights and cheap wine.