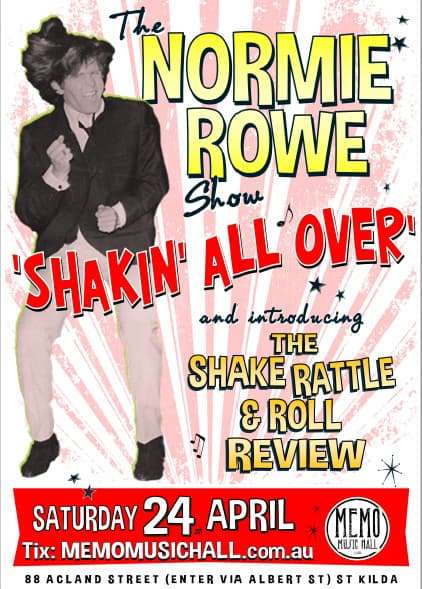 Make no mistake, Normie Rowe & The Playboys were huge! The nearest to them was The Easybeats. They’ve never sounded better – and they’ve never had more fun.

In December 1964 they were playing dances in the Northern suburbs of Melbourne, experimenting with sounds and songs. Within months they were appearing on the GO!! Show and Normie was about to become the most successful Pop artist in Australian music history.

An extra-ordinary run of hit singles followed – “It Ain’t Necessarily So”, “Que Sera Sera”, “I Who Have Nothing” and “Shakin’ All Over” were the monsters but then there was “Pride & Joy”, “Stubborn Kinda Guy”, and on…on it went to England and “It’s Not Easy” and “Ooh La La”. The current line-up sees original drummer Graham “Trotta” Trottman joined by “new boy” of 25 years, Steve Kelson (keyboards) and ex-Aztec Gil Mathews (guitar).

From 1961 to 1965 MEMO Music Hall was the home of TELEFIL recording and film studios under the supervision of legendary sound engineer Bill Armstrong. The stars of Channel 7’s weekly variety program Sunnyside Up, including Olivia Newton-John, recorded the audio at MEMO miming to the pre-records live on-air. The Channel 9 Big Band also recorded at MEMO due to its size and acoustic splendour.

Amongst its claim to recording history fame is its location for Normie Rowe’s 1965 hit, It Ain’t Necessarily So. Banned initially for its lyrics, it was the first number one record in both Sydney and Melbourne, by a Melbourne-based artist.

Stephen Cummings reformed his legendary band, The Sports, for 3 shows only at Memo Music Hall in St Kilda. Our photographer, Mary Boukouvalas, was there to catch all the action.

Act III, Scene VI of King Lear. A tense and gripping scene wherein the ageing king informs his three daughters that they have all been accepted as contestants on Family Feud.
Ben Pobjie, comedian
Sitting in the sun, in a nice chair, with a good book.
James Reyne

Tunes, mates, and honesty. No dickhead policy!
Buddha In A Chocolate Box
Currently, I’m completely enveloped by writing my book; trying to complete the manuscript for my tome.
Jeff Duff

Currently its the Yarra River Trail I’m walking along. Generally my scene would be Melbourne. Nothing feels or compares to home.
Simon McConnell, The Delta Riggs
Our gigs have an air of danger and sex. Beautiful women are free to express themselves and are as dangerous as hell. Everybody can have a good time ’cos there’s a lot of love in the room and we just can’t help but stomp out that primeval swamp boogie ooze.
Chris Russell’s Chicken Walk

When I’m not working in the studio or doing shows I’m at home with my partner and our baby so I guess they are my scene.
Way of the Eagle
My scene is a Punk-hardcore scene or an underground, minimal electronic scene, something grungy – where everyone is wearing black. That’s my vibe; don’t go out until 11 when all the other vampires come out and go home when the sun comes up at 7. Oh shit. Creatures of the night.
Greg Puciato, Killer Be Killed & Dillinger Escape Plan

My scene is driving fast cars and shooting guns.
Ace Frehley
Right now it’s a room with no lights on. An unmade bed. A laptop with 9% battery and a mosquito that just refuses to die.
Dave Larkin, Dallas Crane
My scene is Brunswick. I love it. It provides me with just about everything I need.
About Charlie Marshall

Going to the river on sunny afternoons with the blow up dingys and resting your beers on lily pads.
The Frowning Clouds
My scene is finding any excuse to dance with my 2 year old daughter Ruby.
Matthew Hardy, Comedian

I like to think that I belong to the head-strong Independent Music Scene – where we – musos and audience and everyone in between – all make gigs/tours, recordings, releases happen for ourselves and work our arses off to keep it going for the rest of our lives – all for the love of Music!
Florelie Escano
Melbourne. Nowhere else is as great as Melbourne.
Brat Farrar

The car wash scene from Cool Hand Luke will do just fine thank you.
Old Gray Mule
What’s my scene? well…
And another thing I’ve been wondering lately
Oh, baby,
Tell me where have you been?
Now the stage is set
Where’s my Juliet, baby?
Is it maybe
My Midsummer Night’s Dream?
What’s my scene?
Clowns