Pittsburgh political punk band ANTI-FLAG have just announced a new acoustic
album American Reckoning, set to be released on Spinefarm Records / Caroline
Australia on September 28th. The album features acoustic versions of songs
from their past two albums, as well as covers of songs that inspired them.
Pre-orders for the album are available now via Spinefarm Records / Caroline
Australia. ANTI-FLAG are now premiering a new music video for the acoustic
version of “The Debate Is Over (If You Want It)” The video was filmed in the
band’s hometown of Pittsburgh, PA, and directed by Josh Massie and
Anti-Flag.

American Reckoning, the new acoustic album from Pittsburgh political punk
band Anti-Flag, strips down some of the bandâs latest hits to get to the
heart of the message. The album features acoustic versions of songs off of
their last two albums, American Spring (2015) and American Fall (2017), as
well as covers of some of the classics that inspired them. By arranging
these songs together, American Reckoning functions as an account of one of
the countryâs most tumultuous political times told by some of musicâs
sharpest political minds.

The American series, all released on Spinefarm Records, showcases why
ANTI-FLAG is recognized as a staple in punk rock. Known for their left-wing
politics, focusing on anti-war activism, imperialism, class struggle, human
rights, and various sociopolitical sentiments, Anti-Flag have proven
themselves as both dedicated activists and accomplished musicians since
forming in 1993. Decades of strong political ideals and rousing punk rock
songs have allowed the band to assemble a devoted fan base of likeminded
individuals all across the world. A quote from the band on their new album
can be found below.

“When youâre a band that has been together as long as ANTI-FLAG has you take
nothing for granted. We have far exceeded any personal expectations we have
had for the band, our art and the reach that it has had. This chapter of our
band started with the hope of American Spring, the anger of American Fall
and comes to cessation with American Reckoning…

This piece focuses on songs from both records (Spring/Fall) that we felt
maintain their relevance, even in the distraction politic Donald Trump
America, where issues and truth are distorted in a seconds time. We also
wanted to provide insight into our influences that lead us to write the
records, thatâs where the covers come in. They are songs that people may not
expect to be influential to ANTI-FLAG records but either in their messaging
or sonics they were tremendously impactful to us as individuals and hence
the song writing process.

We cannot be knee jerk reactionary to a president that uses corporate media
to endlessly lie, we created statements and art that we feel directly combat
these tactics, American Reckoning has allowed us to revisit some of those
previous statements and shine new light on them.” – ANTI-FLAG

American Reckoning was recorded in Pittsburgh, PA, and mixed and mastered by
long time ANTI-FLAG engineer Justin Francis. The album’s artwork was
designed by Doug Dean, who also did the artwork for both American Spring and
American Fall. 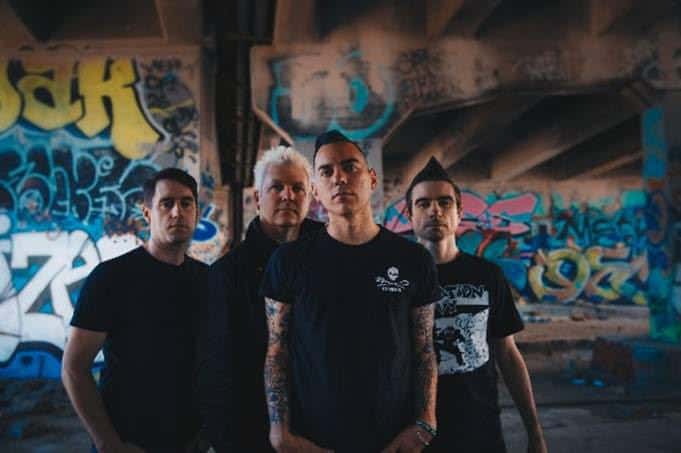 American Reckoning Track Listing
1. The Debate Is Over (If You Want It)
2. Trouble Follows Me
3. American Attraction
4. When The Wall Falls
5. Racists
6. Set Yourself On Fire
7. Brandenburg Gate
8. Gimme Some Truth (John Lennon cover)
9. For What It’s Worth (Buffalo Springfield cover)
10. Surrender (Cheap Trick cover)

Tegan Voltaire, The Voltaire Twins
We can be dirty, we can be imperfect, we can be classy, it doesn’t matter. We drift between scenes and eventually may just create our own.
The Ugly Kings
I’m in with the Out-Crowd
Dave Warner
Obviously to create music. My family. I love driving my Ferraris.
Yngwie Malmsteen
It’s beards.
Nathaniel Beard, The Beards
Aside from music and everything creative, I love open-mind people, unexpected humour, seeing the world and nature, riding my bicycle, playing billiards. I’m also a fan of coffee, whiskey and most things vintage.
Jessica Stuart Few
All the kids who weren’t cool at school and still aren’t. Those people who didn’t manage to become awesome artists and uber hip performers. The raggy dolls who never found a way to make their raggy doll-ness work for them.
Jonathon Duffy
Leadfinger is a very strange band, hard to define, but we are free.
Stew, Leadfinger
Cool venues with good beer on tap that don’t mind us getting loud and getting room grooving so hard you feel the floor shaking.
Papa G and The Starcats
It’s a delirium, really, but I like to live like this.
Hugo Race
World/folk. Acoustic and proud of it!
Ilana Cravitz, The London Klezmer Quartet
Country roots, old time, bluegrass, folk, Americana scene Traditional plus :)
Whitetop Mountaineers
All the wandering. The bastards and the angels. The sound of the rain and the pains of the heart. The silence. All the houses and all the rooms. All the keys and phones.
Raised By Eagles
Ep. 1 Series 3 of BBC’s ’Sherlock’ where Sherlock bungee jumps through a window and kisses Molly Hooper.
Miss Adelaide Everheart from Early Burley Burlesque
The TV show “Full House
World Wild
Fuck the Fucking Scene question! xo
Fuck The Fitzroy Doom Scene
Yass KFC
Simon, Loon Lake
Going to the river on sunny afternoons with the blow up dingys and resting your beers on lily pads.
The Frowning Clouds
Right now it’s a room with no lights on. An unmade bed. A laptop with 9% battery and a mosquito that just refuses to die.
Dave Larkin, Dallas Crane
Sitting in the sun, in a nice chair, with a good book.
James Reyne
I like the beach more than anything. The beach feels like home all year round. In terms of a scene…I actually prefer to hermit most of the time.
Abbe May
Comedy, surreal show girls, burlesque and theatre
MC KREWD
Hiking a 14K foot mountain in Colorado
Cole Washburn
My family, my friends, my home.
Cory Putman, Norma Jean