ANDY BLACK, A.K.A. Andy Biersack, frontman and founding member of BLACK VEIL BRIDES, is heading down under this August and September for his first-ever solo headline tour.

After gaining the world’s attention nearly seven years ago with the emergence of heavy rock band BLACK VEIL BRIDES, who quickly created a buzz and has built one of the most passionate and formidable fan bases the world over.

2016 see’s ANDY BLACK step out as a solo artist with the release of his highly anticipated debut album The Shadow Side. Cinematic in scope, ambitious in concept, yet down-to-earth in execution, the album carves a brash new place for a bold new singer, using all the tools of pop craftsmanship and lush arrangements available. Songs like ‘We Don’t Have to Dance’, ‘Put the Gun Down’, and ‘Homecoming King’ are readymade anthems embodying all that it means to be young, to be an outsider, to champion oneself and one’s loved ones with a vulnerable but unashamed urgency.

“The songs are pop rock, fun songs. You know there’s certainly a kind of an element to the ’80s in there with Depeche Mode and Sisters of Mercy and that kind of thing.”

Australian fans are yet to witness ANDY BLACK in his solo element, but they won’t have to wait much longer! Bringing with him his full band and a long list of stellar tunes, fans will hear the likes of ‘We Don’t Have To Dance’, ‘Ribcage’ and ‘Stay Alive’, along with several other tracks that are yet to be performed live. Australian fans are in for a real treat!

Check out: We Don’t Have To Dance (Official) + Ribcage + Stay Alive

“This year, the driving force of Black Veil Brides steps out with his debut solo album. In Black’s world, it doesn’t matter if you get your power from the light or the dark, as long as you eventually find it.”
– – Alt Press, 2016 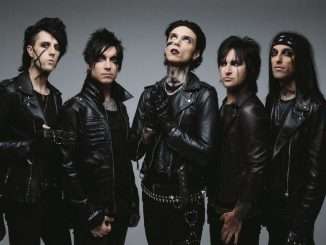 I like to think that I belong to the head-strong Independent Music Scene – where we – musos and audience and everyone in between – all make gigs/tours, recordings, releases happen for ourselves and work our arses off to keep it going for the rest of our lives – all for the love of Music!
Florelie Escano
No set scene. We have played with a variety of bands from King Parrot to The Datsuns. Offer us a show and give us a try!
Los Hombres Del Diablo

Act III, Scene VI of King Lear. A tense and gripping scene wherein the ageing king informs his three daughters that they have all been accepted as contestants on Family Feud.
Ben Pobjie, comedian
My scene is driving fast cars and shooting guns.
Ace Frehley
The car wash scene from Cool Hand Luke will do just fine thank you.
Old Gray Mule
Tunes, mates, and honesty. No dickhead policy!
Buddha In A Chocolate Box
I will continue the continuum, singing my Songline.
Kutcha Edwards

Currently its the Yarra River Trail I’m walking along. Generally my scene would be Melbourne. Nothing feels or compares to home.
Simon McConnell, The Delta Riggs
Going to the river on sunny afternoons with the blow up dingys and resting your beers on lily pads.
The Frowning Clouds
I love being on a little boat near home in South West Victoria with a fishing line in the water, the Sun coming up or going down. I also love walking the streets of Melbourne or Manhattan or many of the beautiful towns and villages of Ireland or anywhere. My partner and my family are central to it all. I also love being in the midst of a great music session, anywhere, anytime, being transported into the soul of the Universe.
Shane Howard
My scene is at the moment Big Wongs General Tsos Chicken as I get sauce on the keys typing to you :-)
Brian Mackey

Cool small bars with good food, good wine, good company
The Backsliders
Well these days my scene tends to revolve around my computer and being nudged by my dog to take her out for a walk. And then having my wife shout at me for spending time on my computer. I’m loving it actually. I’m quite relishing that scene. I miss them both very much.
Peter Hook, Joy Division/New Order/The Light

I’m in with the Out-Crowd
Dave Warner
My family, my friends, my home.
Cory Putman, Norma Jean

When I’m not working in the studio or doing shows I’m at home with my partner and our baby so I guess they are my scene.
Way of the Eagle
The Astor Theatre on chapel st. Old cinema with copious amounts of atmosphere playing classic films (Chaplin, Gene Kelly, Kubrick, etc) and me with a honeycomb choc top spilt on my Tshirt because that’s just how I roll.
Jude Perl, Comedian