Suzanne Vega has just announced that she will continue her world Anniversary Tour and return to Australia with her full band, for a special run of theatre shows.  Last year, the singer-songwriter celebrated the 30th and 25th anniversaries, respectively, of her albums Solitude Standing and 99.9F.

Widely regarded as one of the most brilliant songwriters of her generation, Suzanne Vega emerged as a leading figure of the folk-music revival of the early 1980’s.  With just an acoustic guitar, she sang what has been labeled contemporary folk or neo-folk songs of her own creation in Greenwich Village clubs.  The release of her self-titled, critically acclaimed debut album in 1985 saw the single ‘Marlene on the Wall’ launch her long-spanning career.

Since then, she has sold over 7 million albums and has been nominated for 7 Grammy awards.   The other two big songs, from her breakthrough 1987 album Solitude Standing, ‘Tom’s Diner’ and ‘Luka’ were Top 10 US hits.   These tracks also made an impact on the international charts and continue to be on radio playlists around the world to this day.

Suzanne Vega will take Australian audiences on a journey with her distinctive vocals and many of the songs that encapsulate an iconic career.  Her live performances steer clear of dramatic histrionics, but are emotional experiences, allowing her audience to focus on her masterful storytelling.  Suzanne has become an authentic voice of womanhood and a tuneful cult figure – she tours constantly and continues to play sold-out concerts across the globe in some of the world’s best-known halls and arenas.

In Sydney, Melbourne & Adelaide only, Suzanne will be supported by Deborah Conway and Willy Zygier. Conway is a significant and eloquent contributor to Australian music, singing songs that chronicle the essential elements of life, love, loss, memory, the mundane and the spiritual. From the moment her band, Do Re Mi released the iconic ‘Man Overboard’, off their debut album Domestic Harmony in 1985, Deborah has always followed her own path.  Conway’s debut solo album String of Pearls, released in 1991, was a radical departure from Do Re Mi with its themes of youthful reflection and tongue-in-cheek irreverence and won her the ARIA Award for Best Female Artist that year. A rare female agitator in a time when the music industry was male dominated, Deborah Conway continues to be a role model for young women and a mentor to emerging artists. Her long-term collaboration with Willy Zygier has yielded numbers of projects, including their most recent album Everybody’s Begging & seen them mature into thought provoking songwriters that continue to delight critics and win audience plaudits.

Suzanne Vega has earned her a place as one of our times most cherished songwriters, be sure to get in early so you don’t miss a truly superb show. 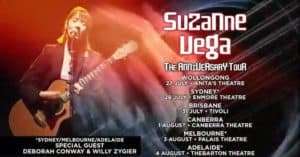 KISS End of the Road Australian tour debuts in Melbourne. It’s been hailed as the biggest and best KISS show ever, and it didn’t disappoint at the spectacular Melbourne kick off concert in the Rod Laver […]

Mammal – one of Australia’s most fierce, outspoken & storied rock artists, shook off the hibernation sickness of their hiatus in late 2017 to make a ferociously triumphant return to the Australian live music scene. May […]

The highlight of the night was the full ensemble gathering for the finale of a song from each of the acts. “Rock N Roll Music” by Mentals, “Only the Beginning” by Deborah Conway, “Who Can […]

When I’m not working in the studio or doing shows I’m at home with my partner and our baby so I guess they are my scene.
Way of the Eagle
Book clubs, philosophy and extreme black metal
Elsen Price
Bed. Pringles. Whisky. Attenborough doco. Wham.
Marlon Williams
Well I’m still looking for my scene, and I think I might have found it. Between the pages of What’s My Scene Magazine.
Dave Faulkner, Hoodoo Gurus
It’s beards.
Nathaniel Beard, The Beards
Melbourne. Nowhere else is as great as Melbourne.
Brat Farrar
I like to think that I belong to the head-strong Independent Music Scene – where we – musos and audience and everyone in between – all make gigs/tours, recordings, releases happen for ourselves and work our arses off to keep it going for the rest of our lives – all for the love of Music!
Florelie Escano
Leadfinger is a very strange band, hard to define, but we are free.
Stew, Leadfinger
My family, my friends, my home.
Cory Putman, Norma Jean
World/folk. Acoustic and proud of it!
Ilana Cravitz, The London Klezmer Quartet
Ep. 1 Series 3 of BBC’s ’Sherlock’ where Sherlock bungee jumps through a window and kisses Molly Hooper.
Miss Adelaide Everheart from Early Burley Burlesque
That’s a hard one, although I do love anything electronic with an indie-pop feel!
Franki
Staying home out of harms way.
Peter Milley, Cairo Club Orchestra
Scones, savory, sweet I don’t mind
The Wooden Sky
Art is my scene. No labels, restrictions or judgement. I love art in all it’s varied glory.
The Last 5 Queers
I have no idea what my scene is; I have been listening to Dubstep and a bit of Drum N Bass. I found a lot of Hip Hop and RnB stuff is getting very interesting again it is pushing different sounds out. I’ve been really into cycling since the early ‘90s; racing mountain bikes and racing road bikes. So between cycling and music there is not much time left, a bit of sleep now and again.
Mike Edwards, Jesus Jones
My bedroom
Nantes
Tunes, mates, and honesty. No dickhead policy!
Buddha In A Chocolate Box
Experimental electronica, musical metacreation, multiplicitous media, hacking.
Ollie Brown
I like to be out in the nature, to get away. Go to the woods. My dad lives in the woods. Maybe once or twice a year I don’t have phone reception there is no Wi-Fi
Fredrik Åkesson, Opeth
I don’t wish to belong to any scene that would have me as a member (with thanks to Groucho Marx).
Bob Spencer, Raw Brit
Our gigs have an air of danger and sex. Beautiful women are free to express themselves and are as dangerous as hell. Everybody can have a good time ’cos there’s a lot of love in the room and we just can’t help but stomp out that primeval swamp boogie ooze.
Chris Russell’s Chicken Walk
Beer, riffs, good people, good food and new adventures, anywhere those things exist, that’s my scene!
Andy, Don Fernando
All the wandering. The bastards and the angels. The sound of the rain and the pains of the heart. The silence. All the houses and all the rooms. All the keys and phones.
Raised By Eagles
It’s Thonbury. It’s my dreaming. I’ve lived here 30 years and it’s evolved with me. The more I drink wine, the more wine bars appear in the neighbourhood. The more I eat, the more cafes appear in the neighbourhood. Fantastic.
Denise Scott, Comedian
Right now it’s a room with no lights on. An unmade bed. A laptop with 9% battery and a mosquito that just refuses to die.
Dave Larkin, Dallas Crane
I am a simple man. My scene is simple. I like playing metal and spending time with my family.
Waclaw ”Vogg” Kieltyka, Decapitated
Our scene is in the city of Bath, a small city with a very big musical identity, we play the British festivals and I am also in the ’choirs scene’. We are also in other bands for fun, music all the way, roll on summer!
Su Hart, Baka Beyond
All of the above and more in my shed every Friday night
Hound
My scene is finding any excuse to dance with my 2 year old daughter Ruby.
Matthew Hardy, Comedian
All the kids who weren’t cool at school and still aren’t. Those people who didn’t manage to become awesome artists and uber hip performers. The raggy dolls who never found a way to make their raggy doll-ness work for them.
Jonathon Duffy
Deep 70s disco, wonky synths, shady lyrics, fairy lights and cheap wine.