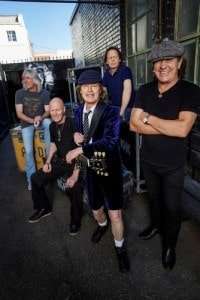 Tickets to the Australian leg of AC/DC’s massive world tour ROCK OR BUST went on sale this morning and in Melbourne and Sydney the box office went into overdrive.

To meet the enormous demand for tickets promoter Garry Van Egmond has scheduled second shows in Sydney and Melbourne. Tickets to these extra shows are on sale now!

SYDNEY – Saturday 7 November ANZ Stadium Australia, www.ticketek.com.au
MELBOURNE – Tuesday 8 December Etihad Stadium, www.ticketmaster.com.au
Following on from the release of their worldwide Number One album ‘Rock Or Bust’, the legendary band will play Australian stadium shows in November and December. AC/DC will blast their way through each of the five major capital cities.

Tickets on sale NOW!
Ticket prices range from: *$99.00 and *$159.00
Visit: www.acdctour.com.au for more tour information
The Rock or Bust World Tour begins in Holland on May 5 and will play dates in Europe through to July. When tickets went on sale in Europe Rock or Bust World Tour sold 1.75 million tickets in 24 hours! The North American leg commences in August through to September before the band head to Australia in November. New Zealand dates have also been confirmed for December with tickets going on sale in May.

What’s My Scene caught up with Tana Douglas to chat about her book LOUD. https://youtu.be/Dc4T0xSZfEA TANA DOUGLAS is a trailblazer. A gamechanger. Groundbreaker. An Australian legend. Tana is the first women roadie in the […]

Q&A Scene: Bon, But not Forgotten

Q&A by guitarist James Morley Tell us about your new single/ album/ tour? The show pays respect to the Bon Scott era of AC/DC on his birthday. The old fella would be 70 this year, and […]

I love being on a little boat near home in South West Victoria with a fishing line in the water, the Sun coming up or going down. I also love walking the streets of Melbourne or Manhattan or many of the beautiful towns and villages of Ireland or anywhere. My partner and my family are central to it all. I also love being in the midst of a great music session, anywhere, anytime, being transported into the soul of the Universe.
Shane Howard
The car wash scene from Cool Hand Luke will do just fine thank you.
Old Gray Mule
Wherever there is music is where I feel most at home
Toby Robinson

Tunes, mates, and honesty. No dickhead policy!
Buddha In A Chocolate Box
My bedroom
Nantes

Currently its the Yarra River Trail I’m walking along. Generally my scene would be Melbourne. Nothing feels or compares to home.
Simon McConnell, The Delta Riggs
Any scene with Al Swearangen & Mr. Wu from the show Deadwood ;)
Mathas

I’m in with the Out-Crowd
Dave Warner
I don’t wish to belong to any scene that would have me as a member (with thanks to Groucho Marx).
Bob Spencer, Raw Brit

My scene is driving fast cars and shooting guns.
Ace Frehley
Cool venues with good beer on tap that don’t mind us getting loud and getting room grooving so hard you feel the floor shaking.
Papa G and The Starcats

Act III, Scene VI of King Lear. A tense and gripping scene wherein the ageing king informs his three daughters that they have all been accepted as contestants on Family Feud.
Ben Pobjie, comedian
My scene is Brunswick. I love it. It provides me with just about everything I need.
About Charlie Marshall