In the 70s and early 80s, 3XY dominated Melbourne’s radio airwaves. On Friday each week the Top 40 hits were announced – our amazing line-up of artists will perform the TOP 20 from Oct 26 1979 LIVE at At MEMO on Sunday 27 Rocktober, 40 Years to the week.

And what a collection of songs it was from a time when…… Carlton won the grand final, Malcolm Fraser was prime minister, Philip Silleny attempted to hijack a TAA aircraft near Brisbane but was disarmed by hostess Esme Qazim and other crew and the American space station Skylab crashed in Esperance, Western Australia………and the 3XY Top 20 was

2 Born To Be Alive, Patrick Hernandez

6 I Was Made for Lovin You, Kiss

9 My Sharona, The Knack

10 The Nips Are Getting Bigger, Mental as Anything

11 Hello, This is Joannie, Paul Evens

19 Up There Cazaly, The Two Man Band 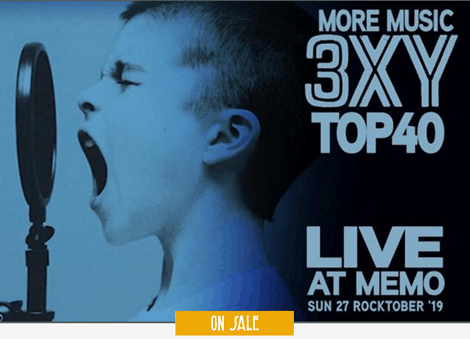 The second Stories and Songs Record Club, hosted by Brian Nankervis, is back at MEMO Music Hall on Wednesday 20 September.

Special guests Charles Jenkins and Lisa Miller will share their personal stories and songs and play live, there’ll be giveaways, surprise guests, and a ‘last person standing’ game. If our first show on 9 August is anything to go by, where guest musician Steve Kilbey played The Stones’ song, Citadel and three live songs, there’ll be laughter, tears, sharpie dancing … and a shared, joyous appreciation of why music matters! […]

Well I’m still looking for my scene, and I think I might have found it. Between the pages of What’s My Scene Magazine.
Dave Faulkner, Hoodoo Gurus
Going to the river on sunny afternoons with the blow up dingys and resting your beers on lily pads.
The Frowning Clouds
We can be dirty, we can be imperfect, we can be classy, it doesn’t matter. We drift between scenes and eventually may just create our own.
The Ugly Kings

Flanelette pyjama pants.
Timberwolf
I am a simple man. My scene is simple. I like playing metal and spending time with my family.
Waclaw ”Vogg” Kieltyka, Decapitated

Act III, Scene VI of King Lear. A tense and gripping scene wherein the ageing king informs his three daughters that they have all been accepted as contestants on Family Feud.
Ben Pobjie, comedian
Scones, savory, sweet I don’t mind
The Wooden Sky

I like to think that I belong to the head-strong Independent Music Scene – where we – musos and audience and everyone in between – all make gigs/tours, recordings, releases happen for ourselves and work our arses off to keep it going for the rest of our lives – all for the love of Music!
Florelie Escano
It’s beards.
Nathaniel Beard, The Beards

I’m in with the Out-Crowd
Dave Warner
Right now it’s a room with no lights on. An unmade bed. A laptop with 9% battery and a mosquito that just refuses to die.
Dave Larkin, Dallas Crane
Hiking a 14K foot mountain in Colorado
Cole Washburn

When I’m not working in the studio or doing shows I’m at home with my partner and our baby so I guess they are my scene.
Way of the Eagle
“Malcolm Hill is a lifetime member of the Melbourne Music Mafia and part of the ratpack of post punk Melbourne artists who have been keepin’ it real across diverse art forms for thirty years.”
Malcolm Hill

Cool small bars with good food, good wine, good company
The Backsliders
What’s my scene? well…
And another thing I’ve been wondering lately
Oh, baby,
Tell me where have you been?
Now the stage is set
Where’s my Juliet, baby?
Is it maybe
My Midsummer Night’s Dream?
What’s my scene?
Clowns