News Ticker
Friday 28th Oct
From Dusk till Dawn
Starring The Tarantinos
Saturday 29th Oct
Monster Mash-up
Starring Thee Wylde Oscars + Dr Funkenstein & the Grave Bandits
Monday 31st Oct
Bands from Beyond the Grave
Starring The Black Heart Death Cult + The Demon Parade + The Braves + Wars
FROM DUSK TILL DAWN:  Friday
To celebrate the 20th anniversary of the release of Quentin Tarantino and Roberto Rodriguez’ Tex Mex vampire masterpiece ‘From Dusk Till Dawn’ The Tarantinos will be hosting a homage to the movie at The LuWOW.
The Tarantinos take the lead role playing the blistering soundtrack in full.
Special guest star Terri Maya as Satanico Pandemonium and the live snake performance.
The Gogo Goddesses as extra fluff.
Plus a second set of Tarantino-esque music performed by the Tarantinos.
Come dressed in your best Vampire or Tarantino costume for a chance to win a prize!
$20 + $2 gst
Tickets from http://theluwow.bigcartel.com/

MONSTER MASH-UP: Saturday
2 rooms of monster mayhem.
The Island Village becomes a 50s/60s den of Back from the Grave garage and Midnight Movies Monsters with The Wylde Oscars performing live with
Disc Jocks Barbara Blaze & Sye Saxon summoning the evil vinyl hoodoo.
The Forbidden Temple lays waste to 80s/90s rock and dark alternative pop as The Grave Bandits put on the trash and
DJ Donnie Depravo delves into the depths of musical depravity.
Plus the Gogo Goddesses + a rare appearance of The Mod Gods our male goo dancers.
The Zombie cocktails will be overflowing all night.
Dress up as horror as you dare!
Free entry

BANDS FROM BEYOND THE GRAVE: Monday
4 Bands with music as dark as their hearts.
Doors 8pm
The LuWOW open from 5pm
Free Entry

Scene News: End of The LuWOW 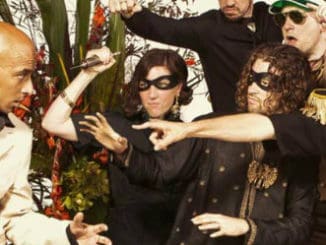 Scene News: Dogsday CD launch at the LuWOW 20th May

Well I’m still looking for my scene, and I think I might have found it. Between the pages of What’s My Scene Magazine.
Dave Faulkner, Hoodoo Gurus
Melbourne. Nowhere else is as great as Melbourne.
Brat Farrar

Act III, Scene VI of King Lear. A tense and gripping scene wherein the ageing king informs his three daughters that they have all been accepted as contestants on Family Feud.
Ben Pobjie, comedian
It’s beards.
Nathaniel Beard, The Beards

Right now it’s a room with no lights on. An unmade bed. A laptop with 9% battery and a mosquito that just refuses to die.
Dave Larkin, Dallas Crane
Bed. Pringles. Whisky. Attenborough doco. Wham.
Marlon Williams

Currently its the Yarra River Trail I’m walking along. Generally my scene would be Melbourne. Nothing feels or compares to home.
Simon McConnell, The Delta Riggs
I like to be out in the nature, to get away. Go to the woods. My dad lives in the woods. Maybe once or twice a year I don’t have phone reception there is no Wi-Fi
Fredrik Åkesson, Opeth

I love being on a little boat near home in South West Victoria with a fishing line in the water, the Sun coming up or going down. I also love walking the streets of Melbourne or Manhattan or many of the beautiful towns and villages of Ireland or anywhere. My partner and my family are central to it all. I also love being in the midst of a great music session, anywhere, anytime, being transported into the soul of the Universe.
Shane Howard
Cool venues with good beer on tap that don’t mind us getting loud and getting room grooving so hard you feel the floor shaking.
Papa G and The Starcats

I like to think that I belong to the head-strong Independent Music Scene – where we – musos and audience and everyone in between – all make gigs/tours, recordings, releases happen for ourselves and work our arses off to keep it going for the rest of our lives – all for the love of Music!
Florelie Escano
Going to the river on sunny afternoons with the blow up dingys and resting your beers on lily pads.
The Frowning Clouds
Anywhere there is good company, great conversation, and a glass of red.
Helen Perris