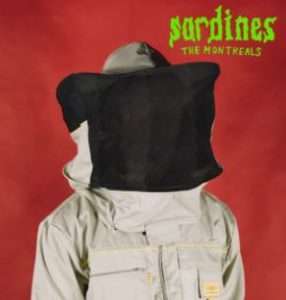 Coming in hot off the back of the release of their debut EP ‘Indigo Club’ and beloved single ‘Deadheads’, which garnered national radio play, saw the band tour nationally, land support slots with the likes of Andy Bull, The Last Dinosaurs, Alpine and amass rave reviews. “It’s hard to wrap my head around how songs can still affect me as much as ‘Deadheads’ does.” Indie Shuffle “File next to: The Jungle Giants, Two Door Cinema Club, music you can’t stop tapping your foot to” Dom Alessio Triple J “[It’s] as if we’d been listening to The Montreals for years as they played the soundtrack to our fumbling early 20s.” The Music. Now, Adelaide indie poppers The Montreals deliver us their dreamy new indie-pop single ‘Sardines’.

After the success of the debut EP which has seen over half a million streams the slick Adelaide outfit are ready leap into 2018 with their brand new banger. “We are super duper excited for y’all to hear the new single! I wanna get married, seeya soon Australia” The Montreals.  Sardines’, hits all the right notes for the perfect summer sing-along. It’s got more groove than Stella, juicy AF harmonies, swirling 80’s synths and is guaranteed to have you belting out “Make me feel good, Make me feel good, if you want me to, you could be mine, you could be mine if you want me  too”. It’s a foot tapping, head nodding, feel good tune that will give you all the warm and fuzzies. ‘Sardines’ is available now.

After sharing a festival stage with Duke Dumont and Safia as part of  Adelaide’s Oh Yes Festival and supporting the likes of Northeast Party House and The Creases in 2017, The Montreals are excited to celebrate the release of ‘Sardines’ with a headline tour.

Tell us about your new single/ album/ tour? We Don’t Know is the first single of our debut EP Bloodline. It’s kind of an interesting one for us because it’s a little outside what I […]

SOPHISTICATED DINGO are sick of your smashed avo, craft beer and buzzfeed articles about the yoof and their inability to save money. And they’re telling you where to go in their trash punk single, ‘Yuppies’. […]

Our scene is folk that are interested in change. Not just music, but breaking the norm, the boundaries and stereotype of Australian ’rock/pop’ music. Unpredictable, the question marks, the new jokers in town. Don’t Believe The Haze.
Slumberhaze
Melbourne. Nowhere else is as great as Melbourne.
Brat Farrar
Art is my scene. No labels, restrictions or judgement. I love art in all it’s varied glory.
The Last 5 Queers
My bedroom
Nantes
Hiking a 14K foot mountain in Colorado
Cole Washburn
No set scene. We have played with a variety of bands from King Parrot to The Datsuns. Offer us a show and give us a try!
Los Hombres Del Diablo
Sitting in the sun, in a nice chair, with a good book.
James Reyne
I like to think that I belong to the head-strong Independent Music Scene – where we – musos and audience and everyone in between – all make gigs/tours, recordings, releases happen for ourselves and work our arses off to keep it going for the rest of our lives – all for the love of Music!
Florelie Escano
All of the above and more in my shed every Friday night
Hound
My scene is at the moment Big Wongs General Tsos Chicken as I get sauce on the keys typing to you :-)
Brian Mackey
Experimental electronica, musical metacreation, multiplicitous media, hacking.
Ollie Brown
It’s a delirium, really, but I like to live like this.
Hugo Race
I like to be out in the nature, to get away. Go to the woods. My dad lives in the woods. Maybe once or twice a year I don’t have phone reception there is no Wi-Fi
Fredrik Åkesson, Opeth
Cool venues with good beer on tap that don’t mind us getting loud and getting room grooving so hard you feel the floor shaking.
Papa G and The Starcats
I think my style is more just making cameos in everyone else’s scene.
Mojo Juju
Hot, hot lovers
Luke Monks, Gay Paris
Staying home out of harms way.
Peter Milley, Cairo Club Orchestra
Currently, I’m completely enveloped by writing my book; trying to complete the manuscript for my tome.
Jeff Duff
Quirky cabaret bars that serve a mean G&T and boast a stellar cocktail list..which is why you’ll always find me returning to The Butterfly Club! I also love the buzz of a Fringe or Cabaret Festival, or a smart Opening Night. Any excuse for a dress up, really!
Amelia Ryan, Lady Liberty
Act III, Scene VI of King Lear. A tense and gripping scene wherein the ageing king informs his three daughters that they have all been accepted as contestants on Family Feud.
Ben Pobjie, comedian
Well these days my scene tends to revolve around my computer and being nudged by my dog to take her out for a walk. And then having my wife shout at me for spending time on my computer. I’m loving it actually. I’m quite relishing that scene. I miss them both very much.
Peter Hook, Joy Division/New Order/The Light
Scones, savory, sweet I don’t mind
The Wooden Sky
It’s beards.
Nathaniel Beard, The Beards
The dog park’s pretty good. I have a couple of miniature pinchers. And they’re the loves of my life. I take them for walks to the dog park; I’ve got a Harley Davidson I ride around. It’s not too exciting. It used to be sex, drugs and rock n roll; now I walk my dogs.
Stan Lee, The Dickies
My scene is Brunswick. I love it. It provides me with just about everything I need.
About Charlie Marshall
Our scene is this big gorgeous wide world we live in all its majestic splendour!
Kim Salmon, The Darling Downs
Our scene is in the city of Bath, a small city with a very big musical identity, we play the British festivals and I am also in the ’choirs scene’. We are also in other bands for fun, music all the way, roll on summer!
Su Hart, Baka Beyond
The car wash scene from Cool Hand Luke will do just fine thank you.
Old Gray Mule
Yass KFC
Simon, Loon Lake
Deep 70s disco, wonky synths, shady lyrics, fairy lights and cheap wine.