Andrew Eldritch, one of the founding members of The Sisters of Mercy abhors his band defined as goth, but the young and old goths clad in black, don’t care. They’re soaking up the atmosphere in the confines of the Forum with its gothic/ Roman architecture.

All girl, Melbourne punk-rock trio, CASH are stoked to be supporting TSOM. Lead singer and vocalist Cassie Hope is so excited she tells us so, repeatedly. Featuring some lightning fast drumming from Ash Acid, impressive guitar licks and sweet vocals care of Hope, this is a band to watch, judging from the response from the crowd.

Nine fifteen on the dot, the characteristic synth refrain care of Doktor Avalanche, blares through the speakers, and emerging from the smoky mist, Andrew Eldritch clad in black and dark shades sings the first line of “More” in his deep baritone voice. The crowd go wild, with loud cheers, clapping and a sing along en masse.

Thankfully gone is Eldritch’s white hoody from seven years ago when they played the Corner, and whilst his voice is a little weary, there’s hope for redemption. The band released three albums in their 39 year history ; First Last and Always (1985), Floodland (1987) and Vision Thing (1990) but the influence of those albums is far reaching and Eldritch is revered by fans the world over, who profess an unabashed devotion to the man and his music.

Masterful guitar playing by Ben Christo and Aussie Dylan Smith, enhances the live performance, with some rock posturing thrown in for good measure, whilst Eldritch’s performance is more restrained and enigmatic.

One of their finest songs, the brooding, “Alice” is followed by two new tracks, “Show me on the Doll” and “Better Reptile,” and the hits keep flowing. “Dominion/Mother Russia” sees the throng first pump as they sing the chorus, “Marian” and “First Last and Always” draw cheers from ironically some of the happiest goths ever to be seen at a gig.

The encore is a crowd pleaser : four highlights played in quick succession : “Lucretia my Reflection” purportedly written about ex- bassist and vocalist “Patricia Morrison,”Vision Thing”, “Temple of Love” and then the atmospheric masterpiece “This Corrosion” which has everyone singing in refrain “Hey now, hey now now” and The Sisters of Mercy have completely redeemed themselves. 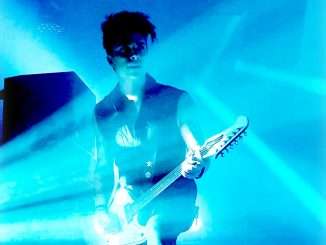