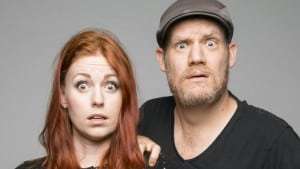 Jones kicks off the sketch with stand up, priming the throng and is later joined by Johnson.  Soon they are Guinea Pigs, clad in matching grey marle t-shirts and pants in a hermetically sealed room, being subjected to a series of  psychological experiments by a disembodied robot voice, blaring through speakers flanking the stage.

Their Moosehead award winning show is an extremely clever concept and Jones and Johnson share a natural rapport. Both are comfortable on stage and put the audience at ease, in the quaint room at the Portland Hotel. Audience members are targeted as the butt of jokes, and are called up to participate in sketches which provides an extra dimension to the show. Flashbacks are nicely executed, and whilst no animals are harmed during the show, the same can’t be said for the marshmallows or the shadow puppet.

Despite a couple of punters laughing loudly and continuously, the series of sketches did not seem that funny. A chuckle rather than a belly laugh was all that this scribe could muster and the biggest laugh was for  an audience member’s witty lines made up on the spot. Too madcap for theatre and not funny enough for comedy, Jonestown seemed to fall somewhere in between on this Wednesday night and the weak ending didn’t reach the intensity of earlier sketches.

Jonestown is an intelligent concept, Sarah Jones and Nick Johnson are instantly likeable,  but failed to incite fully fledged laughter.

January in Melbourne, means holidays, lazing about at the beach, cursing the consecutive days over forty degrees, and the month of the music festival. The Sugar Mountain festival has been going strong since its inception […]

My scene is driving fast cars and shooting guns.
Ace Frehley
No set scene. We have played with a variety of bands from King Parrot to The Datsuns. Offer us a show and give us a try!
Los Hombres Del Diablo

Right now it’s a room with no lights on. An unmade bed. A laptop with 9% battery and a mosquito that just refuses to die.
Dave Larkin, Dallas Crane
I love being on a little boat near home in South West Victoria with a fishing line in the water, the Sun coming up or going down. I also love walking the streets of Melbourne or Manhattan or many of the beautiful towns and villages of Ireland or anywhere. My partner and my family are central to it all. I also love being in the midst of a great music session, anywhere, anytime, being transported into the soul of the Universe.
Shane Howard
World/folk. Acoustic and proud of it!
Ilana Cravitz, The London Klezmer Quartet

I like to think that I belong to the head-strong Independent Music Scene – where we – musos and audience and everyone in between – all make gigs/tours, recordings, releases happen for ourselves and work our arses off to keep it going for the rest of our lives – all for the love of Music!
Florelie Escano
Our gigs have an air of danger and sex. Beautiful women are free to express themselves and are as dangerous as hell. Everybody can have a good time ’cos there’s a lot of love in the room and we just can’t help but stomp out that primeval swamp boogie ooze.
Chris Russell’s Chicken Walk

Act III, Scene VI of King Lear. A tense and gripping scene wherein the ageing king informs his three daughters that they have all been accepted as contestants on Family Feud.
Ben Pobjie, comedian
Anyone who welcomes a hairy, gold wearing, hot air blowing idiot to a dinner table is my scene.
Henry Wagons

Tunes, mates, and honesty. No dickhead policy!
Buddha In A Chocolate Box
Currently, I’m completely enveloped by writing my book; trying to complete the manuscript for my tome.
Jeff Duff