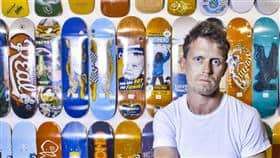 “Don’t give up your day job,” is a saying often bandied about around creative types. Comedians have been known to hold down a day job or two when building up their careers in comedy. David Quirk has literally taken this statement to heart, to the extent that he has been employed in a skate shop for most of his adult life. Fourteen years to be exact. As part of his schtick, he performs his entire one hour stand-up show, Thrasher, in the skate shop, which lies conveniently on Swanston St at Fast Times across the road from the Melbourne Town Hall.

The sheer novelty of the setting is clever, and puts the audience in a state of anticipation as they are seated directly adjacent to the shop counter, which lies in front of decks of varying designs and colours. Beer taps on the counter provide refreshment before the show, and perhaps quench the thirst of customers during retail hours. Considering Quirk has spent most of his life working in the store, his immediate surrounds are potentially a source of comfort to him, so he seems completely at ease in this environment.

Thrasher centres around Quirk’s experiences in the shop along with his love of skateboarding. His self-deprecating and honest style wins over the crowd effortlessly. Many howling with laughter after his quick gags and observational humour. One skit which he conjured up to alleviate the tedium of working in the same store for over a decade, has to be seen to be believed. It is hilarious. His stories of love, loss, and skateboarding are well executed with excellent comedic timing. A guest appearance by comedian Zoe Coombs Marr gives an added depth of realism to the sketch.

David Quirk is a likeable, funny, fellow, and has a bright future in comedy, even though he loves his day job. Thrasher is well worth a look. See it before it sells out.

Selina Jenkins’ male alter ego, Beau Heartbreaker is a humble dairy farmer from the country.  His laid back style puts the audience at ease immediately, in the cosy Backstage Room at the Town Hall. Latecomers are greeted […]

Celeste is an Australian comedian who has taken on the “challenge” of recreating high profile social media images under the hashtag #celestechallengeaccepted. Check out her recreation of Kylie Jenner’s “subtle look for parent teacher interviews” […]

Q&A with Belinda Campbell (wit incorporated Artistic Director) Tell us about your new play, Fairy Tale News? Fairy Tale News is a brand new Australian comedy, that takes some of our favourite children’s storybook characters and […]

World/folk. Acoustic and proud of it!
Ilana Cravitz, The London Klezmer Quartet
Cool venues with good beer on tap that don’t mind us getting loud and getting room grooving so hard you feel the floor shaking.
Papa G and The Starcats
We can be dirty, we can be imperfect, we can be classy, it doesn’t matter. We drift between scenes and eventually may just create our own.
The Ugly Kings
Experimental electronica, musical metacreation, multiplicitous media, hacking.
Ollie Brown
Anyone who welcomes a hairy, gold wearing, hot air blowing idiot to a dinner table is my scene.
Henry Wagons
Staying home out of harms way.
Peter Milley, Cairo Club Orchestra
My scene is driving fast cars and shooting guns.
Ace Frehley
The Astor Theatre on chapel st. Old cinema with copious amounts of atmosphere playing classic films (Chaplin, Gene Kelly, Kubrick, etc) and me with a honeycomb choc top spilt on my Tshirt because that’s just how I roll.
Jude Perl, Comedian
Our scene is this big gorgeous wide world we live in all its majestic splendour!
Kim Salmon, The Darling Downs
Currently, I’m completely enveloped by writing my book; trying to complete the manuscript for my tome.
Jeff Duff
Cool small bars with good food, good wine, good company
The Backsliders
My scene is finding any excuse to dance with my 2 year old daughter Ruby.
Matthew Hardy, Comedian
Book clubs, philosophy and extreme black metal
Elsen Price
Fuck the Fucking Scene question! xo
Fuck The Fitzroy Doom Scene
The dog park’s pretty good. I have a couple of miniature pinchers. And they’re the loves of my life. I take them for walks to the dog park; I’ve got a Harley Davidson I ride around. It’s not too exciting. It used to be sex, drugs and rock n roll; now I walk my dogs.
Stan Lee, The Dickies
Art is my scene. No labels, restrictions or judgement. I love art in all it’s varied glory.
The Last 5 Queers
That’s a hard one, although I do love anything electronic with an indie-pop feel!
Franki
I just do my best to live a life full of the things I love. Rock’n’roll, photography, New York City – they are three things right there that I love a lot!
Paul Miles
Our scene is in the city of Bath, a small city with a very big musical identity, we play the British festivals and I am also in the ’choirs scene’. We are also in other bands for fun, music all the way, roll on summer!
Su Hart, Baka Beyond
Right now it’s a room with no lights on. An unmade bed. A laptop with 9% battery and a mosquito that just refuses to die.
Dave Larkin, Dallas Crane
My family, my friends, my home.
Cory Putman, Norma Jean
Our scene is folk that are interested in change. Not just music, but breaking the norm, the boundaries and stereotype of Australian ’rock/pop’ music. Unpredictable, the question marks, the new jokers in town. Don’t Believe The Haze.
Slumberhaze
Wherever there is music is where I feel most at home
Toby Robinson
All the wandering. The bastards and the angels. The sound of the rain and the pains of the heart. The silence. All the houses and all the rooms. All the keys and phones.
Raised By Eagles
Anywhere there is good company, great conversation, and a glass of red.
Helen Perris
Beer, riffs, good people, good food and new adventures, anywhere those things exist, that’s my scene!
Andy, Don Fernando
Hot, hot lovers
Luke Monks, Gay Paris
Deep 70s disco, wonky synths, shady lyrics, fairy lights and cheap wine.