Lazaruswritten by David Bowie and Enda Walsh officially opened at the Playhouse at Arts Centre on the 21stof May 2019. This glitzy and glamorous musical originally had its debut in New York in late 2015 and is the realization of Bowie’s final project.

The show shines, having been brilliantly carried out by The Production Company. A marked departure from their other productions this highly contemporary piece takes you on a stunning visual, musical and emotional journey. It is an intriguing follow on to the story by Walter Tevis, The Man Who Fell to Earth of which Bowie starred in the 1976 film version.

Lazarustells the story of Thomas Jerome Newton, played by Chris Ryan, a humanoid alien who’s been trapped on Earth for many years, living as a successful businessman.Newton can’t return to his home planet, has become disenchanted with his earthly life and now languishes in his New York apartment in a lonely, alcohol fueled existence. He is plagued with thoughts of his distant alien family and a long-lost love affair with an American girl named Mary Lou. Enter Elly (played by Phoebe Panaretos) his personal assistant determined to help Newton somewhat driven by issues of her own.

Much of the narrative is told through a series of almost 20 songs by Bowie leaving plenty of room for almost dream-like interpretation. The set design fully deliveres on the contemporary approach, featuring large elevated band almost in contrast to the traditional orchestra pit and New York-style glass window panels onto which striking and ambiguous imagery was projected.

This was a passion project for Bowie and that passion was certainly reflected by the performances of all involved. Powerful voices and emotion is conveyed with each and every solo, the energy of the band clearly comes across and the choreography is stylishly delivered with great stamina. While much of the show explores the tormented thoughts and imagination of Newton, there are uplifting moments such performance ofHeroes andAbsolute Beginners.

As Bowie’s final project this is a tribute to his musical talent, creativity and it is definitely stamped with his unique style. It challenges traditional musical styles and is delivered by an extremely talented cast and crew.

WE CAN BE HEROES JUST FOR ONE DAY

The Production Company begins their 2019 season with the David Bowie and Enda Walsh musical, Lazarus.

Lazaruswas the final project of David Bowie. First staged in New York in late 2015,Lazarushas enjoyed sell out seasons in New York and London. This will be the Australian premiere of the ground-breaking musical.

Featuring 18 David Bowie songs includingChanges, HeroesandAbsolute Beginners,Lazarusis inspired by the novelThe Man Who Fell to Earthby Walter Tevis – and the movie which also starred David Bowie. The story focuses on Thomas Newton, an alien, as he remains on earth, unable to die. We follow him during the course of a few days where the arrival of another lost soul might finally set him free.

27 PERFORMANCES from 18 MAY to 9 JUNE • PLAYHOUSE, Arts Centre Melbourne. 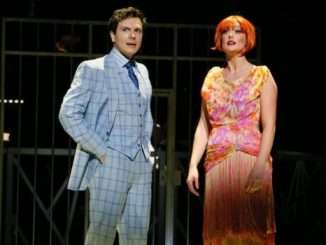