News Ticker
From the outset, this bill of Mental As Anything, Do Re Mi, Sunnyboys, The Church and Icehouse promised to be special. It wasn’t your run of the mill Gold 104 type arrangement – it seemed to read more like a gig guide from the Sydney Trade Union Club circa 1982. It was definitely a Sydney centric affair which was really a treat for this Melbourne crowd. The venue was perfect – not too huge, a great layout, easy drive in/drive out parking and I think the fact that it was slightly smaller than the big international extravaganza winery shows made it very patron friendly. About an hour and a half drive south west of Melbourne on the Bellarine Peninsula, it was a lovely setting even though the sea wasn’t visible from the site.

First to hit the stage was Mental As Anything. As I was watching them I realized how much airtime both on Countdown and 3XY this band used to get in that even though I had never officially owned any of their albums, I knew every song in the set. Original member and songwriter Greedy Smith was in full flight as he led a somewhat different line-up of the band from the classic ‘80s version. Despite the alternate members, they collectively sounded every bit as good as they did back then, trotting out hit after hit. If You Leave Me Can I Come Too?, Live it Up, The Nips Are Getting Bigger, He’s Just No Good For You were all lapped up by the building crowd in between early downpours and backed by a strong southerly. Fortunately the weather took a turn for the better once Do Re Mi started their set.

Having seen Do Re Mi play a rare club show the evening before, It was fun to see the compact version of their set today. The re-vamped 2019 lineup is an all female one this time around with Bridie O’Brien on guitar, Julia Day on drums and Cleo Renner on keys joining original members Helen Carter on bass and Deborah Conway out front on lead vocals. For a band that officially only released 2 full length albums, they sure had a lot of great songs. Included in the set list were well loved songs spanning both of these releases, 1985’s Domestic Harmony and The Happiest Place in Town from 1988. It was fantastic to see the fun this band was having as they belted out such hits as Guns and Butter, Idiot Grin and of course the crowd favourite Man Overboard. For a song that doesn’t have a chorus and includes lyrics that illustrate the non-glamorous side of an intimate relationship, it’s one of those classics that transcended the radio norms and broke through regardless. Do Re Mi were certainly at home on the bigger stage and really connected both mentally and musically with their audience. It was also refreshing to see some strong female role models giving their all up there, something that sadly isn’t present nearly enough in a lot of these types of festival line-ups. 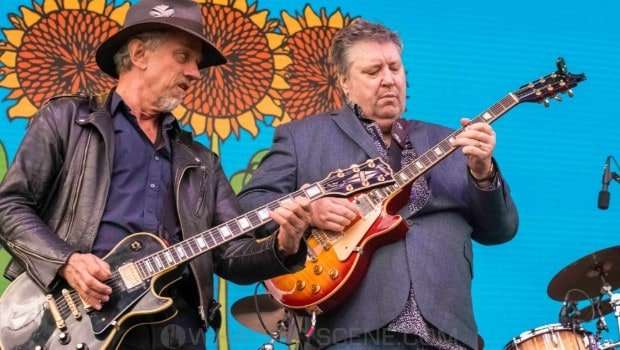 Sydney stalwarts Sunnyboys had to overcome a few technical issues with the sound to begin with but didn’t let it phase them as they wowed the crowd with their trademark guitar driven power pop set. Highlights of course were their classic singles Happy Man and Alone With You which saw the Oxley brothers once again owning the stage with a powerful presence. There were plenty of vintage Sunnyboys Tees being worn with pride down in the front section of the stage and the album cuts from their well loved self titled album were being sung by the faithful with word for word fervour. Trouble In My Brain was a highlight and it was fantastic to hear this band live again and in fine form. Their unique brand of melodic guitars were ever present and a reminder of how unique their sound was and still is.

The Church played a mix of their entire catalogue and crowd favourites such as Metropolis, Under The Milky Way, Almost With You (complete with a
mimed dropped punt) and Unguarded Moment were obvious standouts. Steve Kilbey was in fine form and was fully present and engaged, leading the band and taking the opportunity to play some of the newer material in the set which showed just how musically and creatively relevant this band still is. As the darkness descended and the crowd was starting to show the effects of a day of sampling Leura Park Estate’s finest, Kilbey was definitely in command and holding court on stage. The dream pop crossed with industrial soundscapes were a perfect transition from day into night and were the perfect segue from the punk edged guitar of Sunnyboys into the synth pop of Icehouse. The absence of Marty Wilson-Piper was more than covered by “new” guy Ian Haug, who has been a permanent addition since 2013, and proved himself once again as a worthy replacement adding the trademark 12 string jingle jangle to round out the sound. This gig was easily the best I’ve seen them.

Icehouse were definitely the main attraction and totally warranted their
headline status. Opening the set with Icehouse from the days when they were known as Flowers and from there the hits kept coming. Again, it was amazing to realise just how many of the Icehouse back catalogue remain firmly entrenched in the collective psyche. Interestingly enough the current lineup of Icehouse features former Voice contestant Michael Paynter on guitar, vocals and keyboards in addition to artist manager (also Paynter’s manager) Paul Gildea on guitar, a constant member since the late ‘80s.  Iva Davies’ performance and charisma on stage had the crowd enraptured.
By now the booze had run out and the bars closed and all attention was focused fair and square on the stage. The new wave pop synth punctuated the sound throughout songs such as Hey Little Girl, Crazy and Electric Blue and sat alongside the earlier and more edgy guitars of Walls, Can’t Help Myself and We Can Get Together. The iconic Great Southern Land was epic in proportion and served as a crescendo point in the set leading up to the encore which interestingly enough was a cover of the T. Rex classic Get It On followed by yet another Icehouse hit Nothing Too Serious to close the evening.
By the end of the day, I actually mentally berated myself for never having seen Icehouse live prior to this show. What a fantastic and prolific band they were and still are!
A perfect way to round out a musical trip down memory lane for so many of those assembled, as well as being a relevant voice to a new generation of Aussie punk/pop rock fans.
About Maryanne Window 36 Articles
Maryanne is a writer and bass player. You can find her onstage with Monique Brumby.

The legendary Australian band, The Sunnyboys, rocked out at The Forum in Melbourne on Thursday 5th March. Our photographer Mary Boukouvalas was there to get some pics.

We’re devastated to announce that our friend Greedy passed away last night. We’ve put together a gallery of some of our favourite Greedy moments. […]

Five years into their reformation and you could be forgiven for thinking the Sunnyboys revival was on the wane, however, with two Sydney shows selling out in just 4 days (faster than any time previous), setting a […]